Feb 19, 2018 5:44 PM PHT
Bong Santisteban
Facebook Twitter Copy URL
Copied
DepEd Secretary Leonor Briones cites the Securities and Exchange Commission decision to revoke the articles of incorporation of Rappler Inc. and Rappler Holdings as the basis for the department's termination of its partnership with Rappler 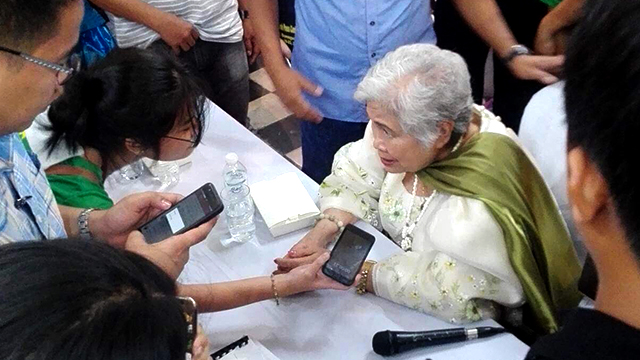 In a press conference held after the opening ceremonies of the National Schools Press Conference (NSPC) in Dumaguete City on Monday afternoon, February 19, Briones said that, contrary to allegations, there was no exclusivity and money involved during the 6 years Rappler engaged with DepEd.

“Walang pera at hindi exclusive ang ating pakikipagtulungan,” Briones said. (There’s no money nor exclusivity involved in our partnership.) She added that the partnership with Rappler was “good.”

Briones emphasized that the DepEd was “a friend to all media.”

The education secretary, however, cited the Securities and Exchange Commission (SEC) decision to revoke the articles of incorporation of Rappler Inc. and Rappler Holdings as the basis for the department’s termination of the partnership.

(DepEd is a government institution and we operate within the mandate of law. There’s a declaration from an institution of high credibility saying the registration is canceled. Until Rappler can fix that, they should not be allowed to continue operating.)

She stressed that this decision was not hers alone.

(It was not just the decision of the secretary of the Department of Education, but of the whole executive committee. We scrutinized it letter per letter and we realized that there’s a difficulty in continuing the partnership)

Briones further explained that there’s a section in the SEC decision saying that, even under appeal, Rappler is barred from continuing its operations.

The DepEd position is inconsistent with SEC’s clarification that the online news organization is still free to continue its operation while the SEC decision to revoke the media firm’s license for allegedly violating the constitution is not yet “final and executory.”

“Rappler can exhaust legal remedies. [They can] appeal to the Court of Appeals within 15 days. Meanwhile, SEC decision is not final and executory,” SEC Spokesperson Armand Pan said on January 15.

The SEC has said Rappler can continue operating. The decision is not yet final.
https://t.co/XFtU1ozQf5 https://t.co/RFSjwgWetA

On February 1, Manila Times published an article alleging Rappler of having “an exclusive contract with DepEd to cover the annual Palarong Pambansa.” A week following this story, DepEd notified Rappler,  through a letter dated February 7, that it was terminating its existing Memorandum of Agreement with the social news network without giving any reasons.

The termination happened two weeks before the NSPC in Dumaguete City scheduled on February 19-23 where Rappler was expected to work with DepEd for the conduct of various activities in the week-long event. The partnership between Rappler and DepEd for NSPC included the holding of the online publishing demo contest, TV Broadcasting contest, and the concurrent session. (READ: By ending Rappler-DepEd partnership, the only losers are the kids)

Dubbed as the “Olympics of Campus Journalism in the Philippines,” NSPC gathers the best budding journalists from all over the country. In 2017, Rappler provided full coverage for the week-long campus journalism event that ironically rarely attracts headlines in mainstream news organizations.

Since 2013, Rappler has also consistently covered the Palarong Pambansa, a week-long sports event led by DepEd. In April 2017, Rappler, in partnership with DepEd, also trained over 120 campus journalists and school paper advisers on multimedia reporting in preparation for the coverage of the biggest youth sports event in the Philippines. – Rappler.com