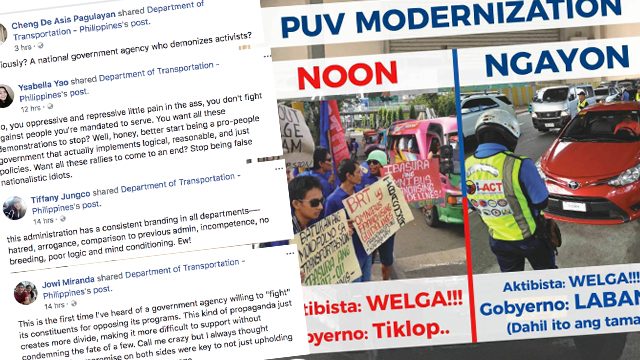 The post – made on Monday, March 19, when transport group Pinagkaisang Samahan ng mga Tsuper at Operator Nationwide (Piston) held a strike against the jeepney phaseout – compared the way the previous and current administrations dealt with those opposing the program.

This was accompanied by a statement from Transportation Secretary Arthur Tugade, saying:

Several administrations in the past wanted to modernize transportation, but every time people wave flags saying that the program is anti-poor, they take a step back. THIS HAS TO STOP.

Modernization should be implemented NOW. We will not stop anyone from expressing their right. But, they also need to make sure that they do not step on other people’s rights. We have to consider the common good. BREAK THAT AND I WILL FIGHT YOU.

Remember. WE ARE NOT FIGHTING THE FEW. WE ARE PROTECTING THE MANY.

By late afternoon Wednesday, shortly after we came out with this report, the DOTr account took down its March 19 post.

Apparently, it had posted the same graphic on March 8, which generated positive comments. The March 19 post, timed with the jeepney strike, yielded more negative reactions. The page retained the March 8 post.

Cheng de Asis Pagulayan said the DOTr seemed to be demonizing the activists.

Jowi Miranda said: “This kind of propaganda just creates more divide, making it more difficult to support without condemning the fate of a few. Call me crazy but I always thought dialogue and compromise on both sides were key to not just upholding the needs of the many but serving everyone.” Some netizens were quick to label the verified DOTr Facebook page as a “meme” and “propaganda” page.

On Monday, some schools and areas suspended classes due to the transport strike.

The following day, March 20, Malacañang declared class suspension in all levels in Metro Manila “to safeguard the safety of students” in view of “the organized transport strike.” The Palace claimed Piston intended to conduct a weeklong strike.

Piston called out Malacañang for spreading “fake news” about a prolonged transportation strike.

What are your thoughts on the DOTr’s social media post? Let us know in the comments below! – Rappler.com