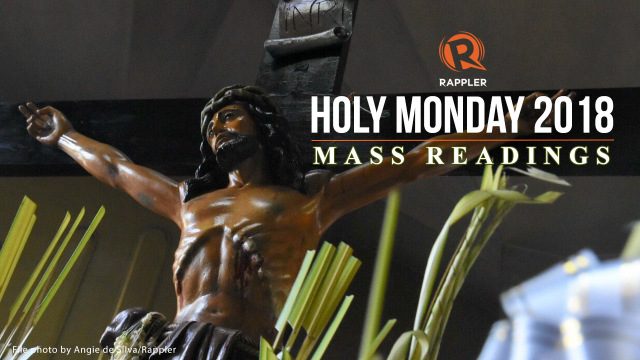 Editor’s Note: For Holy Week 2018, Rappler is publishing the Mass readings for each day of the week. Below is the set of Mass readings in Catholic churches around the world on Holy Monday, March 26.

Here is my servant whom I uphold,
my chosen one with whom I am pleased,
Upon whom I have put my Spirit;
he shall bring forth justice to the nations,
Not crying out, not shouting,
not making his voice heard in the street.
A bruised reed he shall not break,
and a smoldering wick he shall not quench,
Until he establishes justice on the earth;
the coastlands will wait for his teaching.

Thus says God, the Lord,
who created the heavens and stretched them out,
who spreads out the earth with its crops,
Who gives breath to its people
and spirit to those who walk on it:
I, the Lord, have called you for the victory of justice,
I have grasped you by the hand;
I formed you, and set you
as a covenant of the people,
a light for the nations,
To open the eyes of the blind,
to bring out prisoners from confinement,
and from the dungeon, those who live in darkness.

When evildoers come at me
to devour my flesh,
My foes and my enemies
themselves stumble and fall.

Though an army encamp against me,
my heart will not fear;
Though war be waged upon me,
even then will I trust.

Six days before Passover, Jesus came to Bethany,
where Lazarus was, whom Jesus had raised from the dead.
They gave a dinner for him there, and Martha served,
while Lazarus was one of those reclining at table with him.
Mary took a liter of costly perfumed oil
made from genuine aromatic nard
and anointed the feet of Jesus and dried them with her hair;
the house was filled with the fragrance of the oil.
Then Judas the Iscariot, one of his disciples,
and the one who would betray him, said,
“Why was this oil not sold for three hundred days’ wages
and given to the poor?”
He said this not because he cared about the poor
but because he was a thief and held the money bag
and used to steal the contributions.
So Jesus said, “Leave her alone.
Let her keep this for the day of my burial.
You always have the poor with you, but you do not always have me.”

The large crowd of the Jews found out that he was there and came,
not only because of him, but also to see Lazarus,
whom he had raised from the dead.
And the chief priests plotted to kill Lazarus too,
because many of the Jews were turning away
and believing in Jesus because of him.