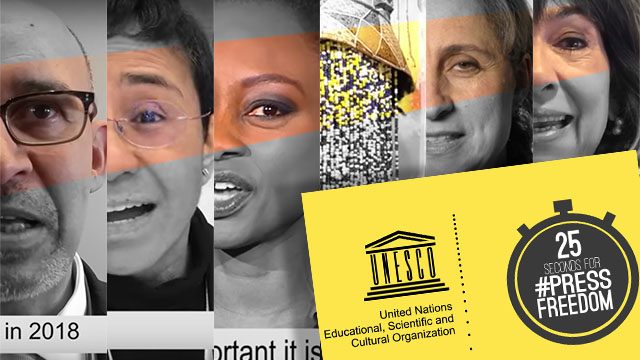 Facebook Twitter Copy URL
Copied
In a UNESCO campaign for World Press Freedom Day, renowned journalists talk about the importance of press freedom in a democracy

MANILA, Philippines – Around the world, press freedom plays a big role in preserving democracy. But in many countries, journalists have faced growing threats as democratic institutions also come under attack.

In fact, in its 2018 World Press Freedom Index, Reporters Without Borders noted the “growing animosity towards journalists” worldwide. Political leaders, added the media watchdog, have openly encouraged hatred and hostility against the media.

In the #25SecondsForPressFreedom campaign by the United Nations Educational, Scientific and Cultural Organization (UNESCO), journalists and press freedom advocates around the world discuss why press freedom matters.

The campaign is in line with the 25th World Press Freedom Day on Thursday, May 3.

No press freedom, no democracy

Among the journalists featured is Rappler CEO and executive editor Maria Ressa. Rappler has been the subject of several complaints filed in 2018 alone amid threats hurled by the administration of President Rodrigo Duterte. (READ: TIMELINE: The case of Rappler’s SEC registration)

“Without press freedom, there is no democracy,” Ressa said. “Journalists shine the light, but journalists only reflect the power of the people. That shining the light will hopefully inspire our people, our public, to hold power accountable.”

CNN chief international correspondent Christiane Amanpour, meanwhile, said press freedom is the rock on which “our societies, our communities, our world” is built on.

“If we’re not free to report the truth then what fills the vacuum? Lies, fake news. And when we don’t have the truth, we have dictatorships,” she said. “Honestly, the difference between democracies and dictatorship is truth and lies, and as I said that is what press freedom is all about.”

Journalist Carmen Aristegui, who has exposed high-level corruption in the Mexican government, said freedom of expression is the mother of all freedoms.

“But it is not enough to be free to think, to be free to investigate, to have an opinion, or to disagree,” she said. “It is crucial to be free to publish and for the people to be informed without censorship, harassment, or violence.”

Wearing a shirt stating that journalism is not a crime, Al Jazeera’s Femi Oke called for an environment where journalists can freely do their job without fearing for their lives.

For investigative journalist Anas Aremeyaw Anas, intimidation and threats have always been part of the job as he worked on exposing corruption and slavery in Ghana in the last two decades.

But having the freedom to write has pushed him to persevere in advocating for human rights.

“One thing that I’ve learned about the truth is that if you believe in it, you will always be at that little corner where nobody minds you, nobody will smile at you,” he said. “Though the holy books always say that the truth will always set us free, for me, press freedom has always set me free.”

Harlem Desir, Organization for Security and Cooperation in Europe (OSCE) representative on freedom of the media, highlighted the importance of lobbying for access to free and independent internet.

“There is no strong democracy and strong society with weak media, with weak access to internet,” he said. “So I think we must also in 2018 defend this free and open internet as a part of our fight for human rights worldwide.”