May 12, 2018 11:13 AM PHT
Frances Roberto
Facebook Twitter Copy URL
Copied
'The UPD administration needs to be level-headed enough to study the rules and interpret them based on the normative standards of journalism, especially when it comes to editorial independence,' says professor Danilo Arao 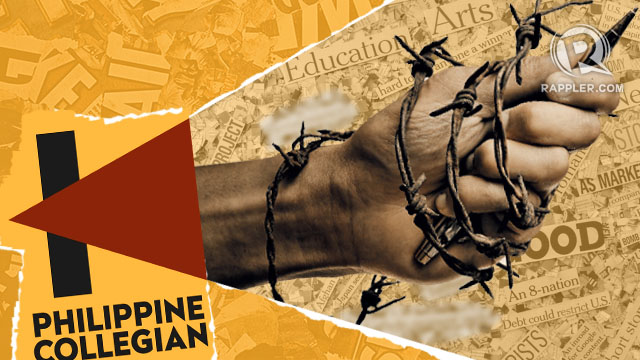 MANILA, Philippines – The Philippine Collegian, the official student publication of the University of the Philippines Diliman has long served the public against all odds.

From the Martial Law period to today’s increasingly repressive political climate, people have turned to Kulê as an unwavering, independent beacon of journalistic spirit – and they continue to do so, even now as the publication faces yet another obstacle.

On April 26, two campus journalists of the Collegian, commonly known as Kulê, were disqualified from the selection of the publication’s next editor-in-chief (EIC).

Collegian Kultura and Features writers Marvin Ang and Richard Calayeg Cornelio were barred from taking the editorial-in-chief exams on grounds of their status as graduating students. The two students were disqualified for not meeting the requirement listed in Article IV, Section 13 of the Philippine Collegian Rules, which says:

“The editor of the Philippine Collegian, while serving in the capacity, must continue to satisfy the same qualifications [of being enrolled in an undergraduate degree course carrying not less than the normal load prescribed for a regular student] and be free of the disqualifications governing eligibility to participate in the competitive examinations, as prescribed in these rules.”

This is despite a history of permitting graduating students, who plan to work towards a second bachelor’s degree – and even allowing students already taking their post-graduate education – to take the exams.

Ang and Cornelio argued this in their appeal letters, saying that they both wish to pursue further undergraduate studies, and would thus be eligible under the rule to assume the editorial position should one of them be chosen.

The argument was, however, dismissed by the Board of Judges (BOJ) supervising the selection process. The exams pushed through on Saturday, May 5, amid protests to postpone them until Ang and Cornelio could participate.

“The appeal to postpone the Collegian exam is academic and moot given that the rules are clear, with no precedents to challenge the rule,” UP Chancellor Michael Tan said in agreement with the BOJ decision.

Rappler presents the different positions taken by the actors involved in this controversy, illustrating how the issue could relate to the greater fight for campus press freedom.

Mary Joy Capistrano, Collegian editor-in-chief from 2014-2016, represents one of the many precedents that ground the cases of Ang and Cornelio.

Cited as an example in a text message sent by UP College of Mass Communication (CMC) associate professor Danilo Arao to Chancellor Tan, Capistrano was allegedly a graduating student when she took the exams for her second term.

Capistrano later clarified that she was tagged as graduating in her specific college, but perhaps not in the university system.

There are other compelling and more comparable precedents, such as the cases of Arra Francia and Melane Manalo, who both had only a semester left to complete when they took the exams in 2016 and 2007, respectively.

Manalo said she was summoned by the BOJ prior to the exams and was granted clearance provided she enrolls in another undergraduate course if she won.

A closer look at the Philippine Collegian Rules reveals another loophole. Article 3, Section 8, pertaining to the rules concerning eligibility to take the editorial exams, only stipulates that (1) an applicant “must be enrolled in an undergraduate degree course carrying not less than the normal load prescribed for a regular student;” and (2) that he/she “must be a regular student of the University with at least one year of residency therein,” and not thereafter.

Even if all were to disregard the linguistic technicality and only considered the former, Ang and Cornelio still should have been allowed to take the EIC exams as they were currently enrolled.

“The two students argue that they are indeed graduating but could enroll in another degree when the new school year starts,” Chancellor Tan said. “This is an ‘if’ though because admission into a new program is not assured.”

Arao, who was also once a news editor of Kulê, reasoned that this is faulty logic: whereas Ang and Cornelio indeed cannot guarantee admission into a second course, they also cannot be outrightly denied.

“We can also counter-argue that there are also no guarantees that non-graduating students who become EICs won’t be kicked out or expelled within the term,” he said.

An infringement on campus press freedom?

Publications across the UP community and various journalism organizations have released joint statements, speaking out against what they deem to be a serious press freedom issue. Signed by notable campus journalists, the letter of support condemns the BOJ for bending the rules on a careless whim.

<blockquote class=”twitter-tweet” data-lang=”en”><p lang=”en” dir=”ltr”>READ: Editors-in-chief of publications across the UP System and heads of various organizations express concern over the decision of the Board of Judges to bar Collegian writers Marvin Ang and Richard Cornelio from taking the editorial examinations tomorrow. <a href=”https://twitter.com/hashtag/DefendPressFreedom?src=hash&amp;ref_src=twsrc%5Etfw”>#DefendPressFreedom</a> <a href=”https://t.co/pwifClMZbq”>pic.twitter.com/pwifClMZbq</a></p>&mdash; Philippine Collegian (@phkule) <a href=”https://twitter.com/phkule/status/992376006559203328?ref_src=twsrc%5Etfw”>May 4, 2018</a></blockquote>
<script async src=”https://platform.twitter.com/widgets.js” charset=”utf-8″></script>

“We fear that the BOJ’s decision and its narrow interpretation of the rules are inconsistent with the spirit of inclusivity and democracy that the exam should be based on,” the statement read.

“For many years, the same rules have been so liberally interpreted in favor of other applicants such as law students, whose qualifications for taking part in the exam are even more questionable.”

On the same day of the editorial exams, 3rd-year Juris Doctor student Jayson Edward San Juan was named the new editor-in-chief of the Philippine Collegian.

CMC chairperson Mikko Ringia filed a letter of protest, citing Resolution 038-2001 of the Commission on Higher Education (CHED), that equates the Bachelor of Laws or Juris Doctor program to a Masters Degree. UP officials however countered that the university does not fall under CHED.

The UP College of Law’s website describes the course as a “four-year undergraduate program leading to a Juris Doctor (JD) degree”.

Tan, in the same memo, said the appeals have “bandied terms like ‘press freedom’, ‘inclusion’, [and] ‘democratic participation’ in a way that trivializes them.”

“On the matter of ‘inclusion’ and ‘democratic participation’, I would question the way students, who are supposed to be graduating this school year, are still so insistent on applying for a post that begins in the next school year.”

Asked for a response to Tan’s assertions, Arao said, “The UPD administration’s insistence that graduating students are ineligible to take the exam based on its own interpretation of the rules could be seen as an attack on the Philippine Collegian’s editorial independence.”

The events of the past week have led Arao to liken UP Diliman to other schools that oppressively muzzle campus journalists and stifle their freedom.

“The issue is not trivial, or even local, because it is a reflection of how much little value is given to campus press freedom by the powers-that-be. In this particular case, there is too much speculation on what would happen if a graduating student becomes EIC and fails to enroll in a second degree, completely ignoring that there are clear rules on succession; the second placer gets selected instead,” he told Rappler.

A week separated the date of the exams and the day the BOJ chose to eliminate Ang and Cornelio from the editorial race, giving the Board ample time to retract its decision; it did not, even after Ang, Cornelio, and their supporters cited supporting arguments. The importance of a mandate free from interference cannot be overstated as the EIC directs how the organization is run – from its use of funds and selection of stories to the composition of Kulê as he/she oversees the staff application process according to the Philippine Collegian Rules.

“The UPD administration needs to be level-headed enough to study the rules and interpret them based on the normative standards of journalism, especially when it comes to editorial independence,” Arao said.

“The administration has a record of repressing Kulê many times in the past in terms of funds and regulations. The latest move to curtail the right of our writers creates a chilling effect, not only on the 95-year-old Collegian but also on the campus press in general,” says Kule Editor-in-Chief Sanny Afable.

He quotes a 1978 Kulê critique of the Philippine Collegian Rules, “[The] rules should not be interpreted strictly or liberally at the whim of the University administration; [the] letter of the law should never prevail over its clear spirit.”

UP College of Mass Communications Dean Elena Pernia, who chaired the Board of Judges, has yet to reply to Rappler’s email dated May 9 – Rappler.com

Frances Roberto is an incoming freshman at the Ateneo de Manila University. She is a Rappler intern.