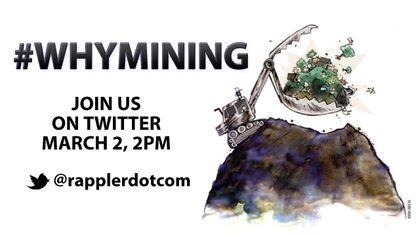 The strongest advocates and critics will converge on Friday, March 2, at Inter-Continental Hotel in Manila for a forum on mining.

The Conference on Mining’s Impact on Philippine Economy and Ecology comes amidst a new mining policy that was controversial for allegedly requiring a review of resource contracts, tighter rules and cutting tax breaks.

It also comes at the end of People’s Action Week Against Mining, a series of conferences by various advocates against destructive mining.

Regina Lopez, managing director of ABS-CBN Foundation and an environmentalist

Christian Monsod of Save Palawan Movement

Why should you care?

The Philippines, one of the most mineralized countries in the world, can harness the economic benefits of what’s under our soils.

This extractive industry has spawned the wealth of some of the richest countries in the world, prompting previous administrations to issue policies supporting mining firms.

However, the supposed contribution of mining to jobs, the revenues of the state or local hosts, among others, have remained a promise.

Too, the sins of the past continue to hound. Mine tailings, polluted waters, denuded mountains, and other accumulated environmental problems have generated deep feelings against mining.

Rappler will be covering the conference Friday, March 2. Leaders from both sides will speak.

While the event is ongoing let’s gather online to discuss the issue. Is mining good or bad for the country? Can we strike a balance to maximize our natural resources without destroying the environment? On Twitter, use the hashtag #WhyMining and tell us if you are for or against mining and why. We start the discussion at 2 pm. See you online. – Rappler.com