Facebook Twitter Copy URL
Copied
By reinforcing opportunities for higher-income women and extending them to poorer women, the Philippines could add $40 billion to its annual GDP in 2025

MANILA, Philippines – The Philippines leads the Asia Pacific region in terms of gender equality in work but there are still some space for improvement, a study by the McKinsey Global Institute (MGI) found.

Released on Friday, May 18, the study calculated a Gender Parity Score (GPS) for Asia Pacific countries using 15 indicators of gender equality in work and three types of gender equality in society: essential services and enablers of economic opportunity, legal protection and political voice, as well as physical security and autonomy.

According to the study, the Philippines is the region’s best performer on indicators of gender equality in work, such as participation in professional and technical jobs and women in leadership positions, and is ‘near best’ on perceived wage gap for similar work.

On gender equality in society, the Philippines is in line with the regional average on essential services and enablers of economic opportunity and on physical security and autonomy, and ‘above average’ on legal protection and political voice.

It’s also one of the ‘best’ on education and financial inclusion, and ‘near best’ in region on sex ratio at birth and child marriage, according to the study.

However, it also has the second highest unmet need for family planning in the region and the fourth highest rate of maternal mortality. 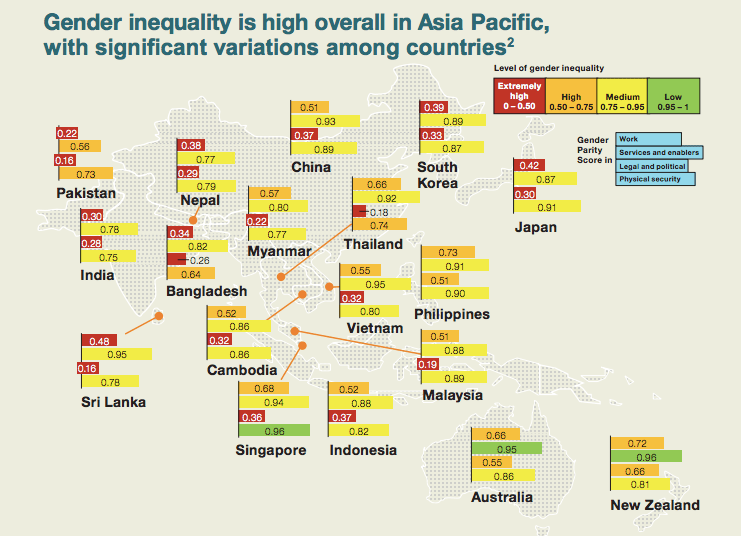 Even though the Philippines scored better than other Asia Pacific countries in terms of gender equality in work, the experience of Filipinas still depends largely on their socioeconomic status, as lower-income women still confront considerable gender gaps and less opportunity, the study found.

By reinforcing opportunities for higher-income women and extending them to poorer women, the Philippines could add $40 billion to its annual GDP in 2025.

“The Philippines has already made significant advances towards gender parity and has established a solid foundation on which to build further progress,” said Kristine Romano, McKinsey & Company Managing Partner for the Philippines. “The next challenge is to support lower-income women to make the most of their economic potential, pursue careers that will earn them higher wages, and give them the support and flexibility they need.”

The study also recommends that the Philippine government and companies consider measures to advance women’s equality in six priority areas:

“For all women in the Philippines, there is work to do on closing wage gaps with men, enhancing access to the finance that will enable them to find and run successful businesses, and providing the flexibility and support that women need to better balance their home and working lives,” said Romano.

The full report can be downloaded here. – Rappler.com