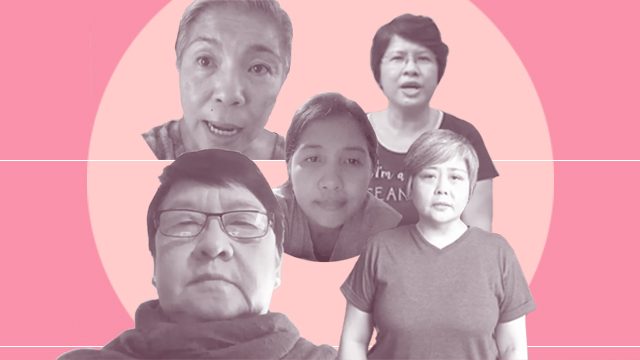 MANILA, Philippines – Why is President Rodrigo Duterte so threatened by women?

With a sitting president who has continuously thrown a string of sexist insults and demeaning statements against women, it almost comes as no surprise how this question has been asked around repeatedly in the past two years. (READ: Duterte, the ‘benevolent sexist’?)

President Rodrigo Duterte’s most recent misogynistic tirade was about the qualities the next Ombudsman should have.

“I want someone whose integrity people believe in. Of course, it coud not be a politicians, especially not a woman,” he said. (READ: Duterte’s word war with women)

Aside from these, the Philippine president also directed the Armed Forces of the Philippines (AFP) to shoot rebels in the vagina to render them useless and whistled and catcalled a female reporter during a press conference.

A loose network of women’s grounds and individual activists are no longer taking these misogynistic statements sitting down. They launched a social media campaign on Sunday night, May 20, to fight back against the Philippine president whom they describe as a misogynist leader.

Using the hashtag #BabaeAko (I am a woman), Filipino women are taking to social media to fight the president’s sexist and misogynistic behavior.

The #BabaeAko videos begin with a quick introduction of the Filipina authoring the post, followed by a short description of herself and a message to President Duterte. All videos ended with a brave declaration: “Lalaban ako.” (I will fight back)

One of the women who joined the campaign is Judy Taguiwalo, a former cabinet member of the Duterte administration.

Below are some of the #BabaeAko videos posted on Facebook:

As a Filipina, what would you like to tell the President Duterte about his treatment of women? – Rappler.com