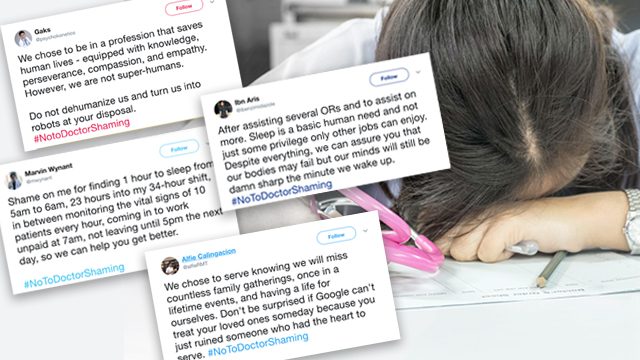 Facebook Twitter Copy URL
Copied
Netizens argue that the viral photos of nurses sleeping while on duty is a symptom of a deeper problem: the overwhelming gaps in the Philippine healthcare system

MANILA, Philippines – On Saturday, May 26, photos and videos of sleeping nurses from a public hospital in Metro Manila went viral on social media.

The same content was picked up by several Facebook pages, triggering an online conversation on the responsibilities of nurses and doctors and the overwhelming gaps in the Philippine healthcare system.

Why people are angry

When the photos went viral, some netizens quickly argued that as medical professionals who took an oath to help save lives, they should not be “sleeping on the job” regardless of the circumstance.

Many of those who echoed this sentiment are relatives of patients who have undergone horrible experiences in Philippine hospitals.  Aside from their observation on doctors and nurses sleeping, netizens also raised how some medical professionals tended to be rude to their patients.

Other netizens, however, have risen to the defense of doctors with the #NoToDoctorShaming posts. “Doctor shaming” was once the term used to describe the blame hurled at doctors by family members who have lost members in the operating room. In recent years, this term has evolved, referring to criticisms against medical professionals.  (READ: Why our nurses our leaving)

The recent brickbats thrown at doctors for taking breaks in between shifts has provoked demoralization and pity from members of the medical community. They have a common plea: Do not generalize all doctors and nurses.

Many of those who posted using the hashtag pointed to the bigger problem that needs to be addressed: poor healthcare system in the Philippines. According to them, many Filipino nurses actually live a life characterized by long shifts and low pay.

We chose to be in a profession that saves human lives – equipped with knowledge, perseverance, compassion, and empathy.
However, we are not super-humans.

Do not dehumanize us and turn us into robots at your disposal.#NotoDoctorShaming pic.twitter.com/FIhCcOnzHw

We chose to serve knowing we will miss countless family gatherings, once in a lifetime events, and having a life for ourselves. Don't be surprised if Google can't treat your loved ones someday because you just ruined someone who had the heart to serve. #NoToDoctorShaming

Shame on me for finding 1 hour to sleep from 5am to 6am, 23 hours into my 34-hour shift, in between monitoring the vital signs of 10 patients every hour, coming in to work unpaid at 7am, not leaving until 5pm the next day, so we can help you get better.#NoToDoctorShaming pic.twitter.com/S9KNXYH1Zi

After assisting several ORs and to assist on more. Sleep is a basic human need and not just some privilege only other jobs can enjoy. Despite everything, we can assure you that our bodies may fail but our minds will still be damn sharp the minute we wake up. #NoToDoctorShaming pic.twitter.com/ApGvdfBOlz

The average Filipino doctor will take on several 36-hour duties to compensate for being understaffed and more importantly, having under-qualified staff. In 2016, a news report said that the ratio of doctors to patients in the Philippines was 1 to 33,000.

Many of the doctors who have taken part in the #NoToDoctorShaming movement, are not from private healthcare facilities. The health care system in the Philippines, has been described as “fragmented” as the divide in access to medical resources between the rich and poor has only widened further the equality.

The desire to work as a doctor has diminished over the years, as the poor healthcare system, and lack of benefits have tarnished its title as a stable career.

Because of the decrease in number of medial professionals, doctors tend to be overworked and even underpaid. With this, netizens argued, that those who remained in this career are those motivated by a genuine drive to save lives.

One day all the physicians in the PH will just say: "Screw it, I'm done, I'm tired, and I'm not appreciated for all the sacrifices. Let's all go on strike. Better yet, let us all just stop being physicians because everyone else seems to know better than us."#NoToDoctorShaming

No, I’m not a doctor. But my mom is and I’ve seen her sacrifices. One of which is she doesn’t sleep till she knows all her patients are ok. And I believe she’s a hero for that. People are throwing rocks at Doctors for sleeping? Damn. What a world.#NoToDoctorShaming

What is your take on this issue? How do you think should the problems in the Philippine healthcare system be addressed? Share your thoughts on X!  – with reports from Simona Gemayel/Rappler.com