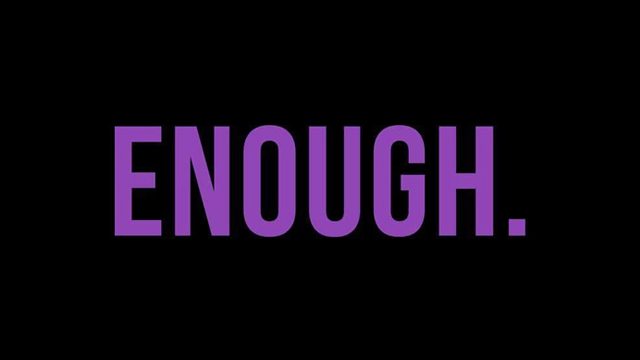 Facebook Twitter Copy URL
Copied
'What matters is that here and now, we take a stand against presidential misogyny, act consistently against a government that condones abuse, and unite on the truth that we will not, cannot stand for violence – not just against women, but against all Filipinos,' says Enough, a movement launched on Facebook

Women made the declaration on Thursday, June 7, as they launched and supported a movement that seeks to bring together all voices of dissent against “state violence” under the administration of President Rodrigo Duterte.

The Enough movement was launched on Facebook a day after Duterte justified his controversial kiss with a South Korea-based married Filipina during the President’s meeting with the Filipino community in Seoul on June 3.

“What matters is that here and now, we take a stand against Presidential misogyny, act consistently against a government that condones abuse, and unite on the truth that we will not, cannot stand for violence – not just against women, but against all Filipinos,” Enough said in a statement.

Upon his arrival from his South Korea trip on June 6, Duterte said critics of the act were just “jealous” of Bea Kim, the woman he kissed.

“If there are enough women to – Well I think if all women here would sign a petition for me to resign, I will resign,” the President said then.

In its Facebook page, Enough invited women to join its fight. “Enough hopes to become a space for a diverse group of Filipino women to come together and take a stand against State violence in the time of Duterte.”

In its statement, Enough described the power imbalance between Kim and the President.

“It is Duterte’s power as President that made this encounter possible. It is Duterte’s power as President that dictated this woman’s reaction, which the President should have known to handle with dignity and distance: this reaction is borne of the fact of his position. But Duterte decided this moment was about him, and that he would use his power over this woman to ask for anything. The mere fact that he asked for a kiss already reeks of malice,” it said.

Malacañang had downplayed the kissing incident in South Korea as a “light moment.” Chief Presidential Counsel Salvador Panelo said he shared his wife’s view that the kiss was something one would give to a “grandchild, daughter, baby, son.”

Enough also said that as President of the Philippines, Duterte should respect and promote respect for women. It cited Duterte’s acts and statements that  objectified women which may normalize a culture of gender abuse and sexual violence in the country.

“So when the President abuses his power over women, demanding a kiss, negotiating for it; when we witness his constant objectification of women: speaking of women based on their body parts; condoning soldiers raping women in a time of war; offering female artistas as gifts to soldiers; justifying polygamy and infidelity as normal for all men; advising against condoms because ‘hindi masarap (not pleasurable)’ and saying women take sole responsibility for birth control.

“When we hear the President defending himself by saying this is what’s ‘normal’ for him: what kind of culture are we creating for our women?” Enough asked. (READ: From ‘fragrant’ Filipinas to shooting vagines: Duterte’s top 6 sexist remarks)

“The repercussions of Duterte’s actions, left unchecked and unchanged, will resonate for generations,” it added.

Enough also reminded Filipinos that it was not the first time for the Philippines to have a “macho president,” referring to former president now Manila Mayor Joseph Estrada who had his share of criticism from women’s groups over his sexist remarks.