How the fight vs plastic pollution can begin in the classroom Facebook Twitter Copy URL
Copied
'We like to start with the children so it'll be embedded in their minds already,' says World Wide Fund environment officer Kimberly Anne Marcelo

MANILA, Philippines — Can you use a math problem to teach children about saving the environment?Conservation group World Wide Fund (WWF) believes this is possible, as the fight against plastic pollution can begin in the classroom.

(It’s not just science that should be used to teach children about caring for the environment. We train teachers from different subject areas to integrate this, even in small ways. For example, if you’re a math teacher, the word problems you give can include renewable energy.)The WWF, according to Marcelo, believes the youth is important in preserving nature. That’s why part of their goals is to train teachers about waste segregation.

“We like to start with the children so it’ll be embedded in their minds already, why we have to conserve the environment,” said Marcelo.Marcelo spoke alongside other environmental advocates in an event on June 16, titled “Climate Action Forum: Filipino Youth and Solutions to Plastic Pollution.”Marcelo discussed how the WWF’s environmental education team partners with the Department of Education and different schools to train teachers to uphold Republic Act 9512, or the National Environmental Awareness and Education Act of 2008.

The team encourages teachers to integrate environmental education in all subjects, through modules on different facets of environmental conservation. Components include the waste management module, which highlights the 3Rs (reduce, reuse, recycle) and composting, as well as the water conservation module that focuses on the importance of watersheds.

Modules are designed to be integrated with other subjects to make lessons more cohesive.

Ysa Nazal, former co-chairperson of the WWF National Youth Council, discussed her reflections on filling a 1.75-liter plastic bottle with plastic waste despite being a zero-waste advocate.

“Despite me being a zero-waste advocate, I still make the same mistakes. I’m part of the National Youth Council, I talk during symposiums, but I still have a 1.75-liter bottle filled with plastic from home,” Nazal said.

“Every day we have to make the same decisions over and over again. It’s a learning process,” she added.

During Saturday’s forum, various Filipino environmental experts also presented their individual efforts to promote a zero-waste Philippines. This was in the light of the universal agenda for a more sustainable world in 2030.

The forum was a partnership between the Philippine Information Agency and the 2030 Youth Force in the Philippines (YFPH). It featured leaders and experts from different sectors to talk about ways to solve plastic pollution, as the Philippines is the 3rd largest contributor to plastic waste in the ocean worldwide.

The event is anchored on the United Nations’ Sustainable Development Goals (SDGs), particularly SDGs 12 to 15, which focus on responsible consumption and production, climate action, life below water, and life on land.

To highlight how the use of plastic is a personal choice, Ludwig Federigan, executive director of the Young Environment Forum, presented Greenpeace’s video “The Story of a Spoon“.

He critiqued common solutions to plastic waste, such as banning certain types of plastic or recycling them, as he believed one should go about changing their mindset first, instead of changing their behavior straightaway.

Federigan also cited former WWF President Yolanda Kakabadse who said, “The future is not a place we go to. It is a place we actively shape.”

“Plastic is light enough to be brought in massive quantities, but a lot of these are left behind,” Gonzalez said. “How do we turn our trash into something useful and valuable?”

Gonzalez detailed a number of methods that can fortify the local waste management scheme, such as residual treatment seen in Green Antz eco-bricks, where sachets are collected from schools and are built into construction materials.

Daniel Alejandre, an eco-waste campaigner from Eco Waste Coalition, also dispelled misconceptions on what it means to be zero-waste.

“It doesn’t mean that there’s no trash at all. The definition of zero-waste is that nothing is wasted. What we want is a circular economy where everything is circulated and used,” Alejandre said in a mix of English and Filipino.

Alejandre emphasized that changes must also be made by industries and the government.

Alejandre then pushed for a ban on plastics. “Dapat may mauna, at definitely manufacturers ‘yon (Someone should go first, and that’s the manufacturers),” he said. “What we need is nationwide [action]. Hindi lang regulation, pero ban talaga.” 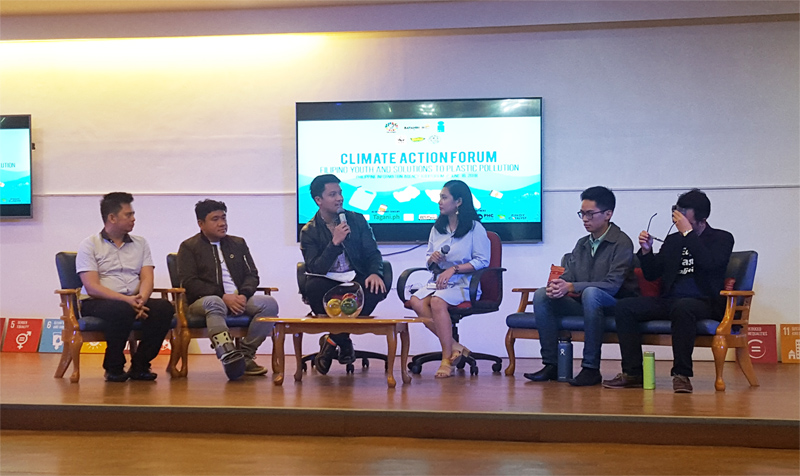 The plastic problem in the Philippines

The Philippines has been regarded the “center of global marine biodiversity”. More than half of the country’s cities and municipalities are along coastal areas, where communities rely heavily on water resources for income and sustenance.

In the year 2014, the Philippines produced about 4.7 million metric tons of seafood, landing 8th among the top fish producing countries worldwide.

As of 2016, it was estimated that around 40,000 tons of municipal solid waste is generated by the Philippines daily, with Metro Manila contributing around 9,200 tons.

Efforts have been made to address these problems, such as the Ecological Solid Waste Management Act of 2000, which provides a systematic waste management program that protects public health and the environment.

However, the law’s objectives have yet to be accomplished. For instance, only 4 out of Davao City’s 182 barangays maintained a materials recovery facility in 2016, resulting in local government spending P151.73 million for sanitary expenses.

Eastword Manlises, YFPH’s Goal 14 ambassador, hopes that the participants will reevaluate their lifestyle, and how they buy their products.

“When they put together their experiences from these opportunities, they can push forward sustainable development for their communities,” said Manlises. — Rappler.com

Luisa Jocson and Gaby N. Baizas are AB Communication students at the Ateneo de Manila University. They are Community interns at Rappler.