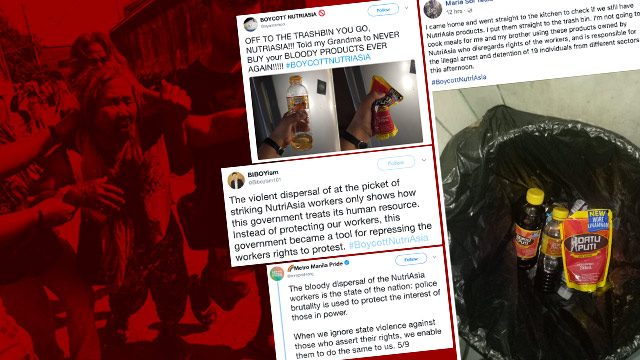 Facebook Twitter Copy URL
Copied
(UPDATED) Netizens have been sharing photos of trashed condiments in response to the violent dispersal outside NutriAsia's plant in Marilao, Bulacan

MANILA, Philippines (UPDATED) – A number of netizens have been throwing their condiments into trash cans and posting it on social media with the hashtag #BoycottNutriasia.

The move is a symbolic response to the violent dispersal that took place outside NutriAsia’s plant in Marilao, Bulacan, on Monday, July 30.

While the hashtag is not new, it was revived online after the photo of an injured elderly woman, her face bloodied, went viral on social media on Monday. She was one of the protesters who joined the picket organized by the Nagkakaisang Manggagawa ng NutriAsia Incorporated. (LOOK: Why NutriAsia workers are on strike)

Militant group Anakbayan said at least 19 were arrested after the dispersal – 8  NutriAsia workers, 6 supporters, and 5 journalists.  Two of those arrested are UP students, according to the Congress of Teachers/Educators for Nationalism and Democracy (CONTEND UP).

Police claimed they recovered guns and drugs from all of the 19 individuals.

“As teachers and workers at the University of the Philippines, we stand firmly with our students, Jon Bonifacio and Psalty Caluza, as they supported the just demands of the NutriAsia workers,” CONTEND UP said in a statement.

(The violent dispersal of the NutriAsia workers and their supporters was unprovoked and careless, resultubf in many wounded, including one grandmother.  Many have gone missing.)

A concerned citizen, 34 year-old Jong Juguilon, has posted these stickers at Robinson’s, E-Mall, SM, and Puregold in Naga City.

Juguilon, a  real state coordinator in Bicol, said it was his way of calling for an end to contractualization and support NutriaAsia workers, coming on the heels of the violent protest dispersal on Monday.

He believes others will eventually notice the stickers and be made more aware of the issue.

(That’s the least I can do to support NutriAsia workers. I saw stickers that I could copy, so I printed them out and posting them at grocery stores. I thought more people would notice them if I posted them there.) 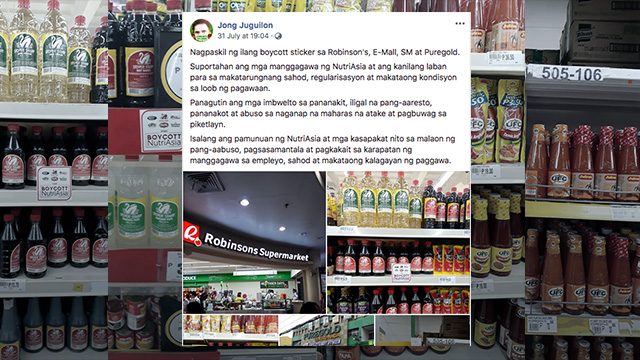 When asked about how the management reacted to what he did, he said they didn’t know about it.

(I didn’t ask for permission. I took the risk. That’s nothing compared to the risk that workers and demonstrators take. If anything happens, I am prepared. I went back to Puregold and SM, the stickers are still there.)

Juguilon said he would continue to produce and paste stickers to raise awareness about the issue.

(We don’t need to experience the same tragedy just to be able to show support. Just like how we seek justice for the victims of EJK, we must be more eager in fighting for them because they can’t defend theirselves anymore)

The violent dispersal also pushed a number of non-governmental organizations and groups to boycott Nutriasia products, in solidarity with its workers.

The bloody dispersal of the NutriAsia workers is the state of the nation: police brutality is used to protect the interest of those in power.

When we ignore state violence against those who assert their rights, we enable them to do the same to us. 5/9https://t.co/QzbyWYWJBs

Below are some tweets by netizens on the social media call to #BoycottNutriasia:

In a statement on Monday, NutriAsia claimed the violence erupted when the picketers “fired a shot in the air and started to hurl rocks at police and guards tasked to maintain peace and order in the area.”

The company lamented the supposed violation of the labor group of the writ of preliminary injuction released by the regional trial court in Bulacan, ordering the workers’ union and the company to “desist and restrain from obstructing the ingress and egress from the company plant.”

“It is even more disturbing that the strikers had used young children and elderlies as frontliners and human shields as they pushed their way to barricade the plant entryways. These children and elderlies clearly have nothing to do with the labor issue at hand,” Nutriasia added in its statement. – Rappler.com