Father who walked daughter down the aisle in viral photo, passes away 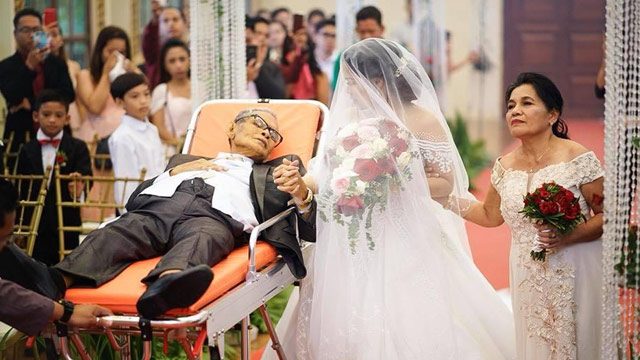 All the 65-year-old, cancer-stricken Pedro Villarin wanted was to be able to walk his daughter, Charlotte Villarin, down the aisle on her wedding day last August 9.

Despite being diagnosed with advanced liver cancer, Pedro got his wish. Then Pedro passed away on August 12.

Charlotte told Rappler it was only on June 16 that they learned about her father’s condition. He was rushed to the emergency room and admitted to the hospital that day.

According to Charlotte, the original plan was to have the wedding in December this year. But when her father was in the hospital, he convinced them to move  the wedding date to August.

“Sabi niya sa akin magpakasal na kami. Magpakasal na daw kami kasi gusto niya malakad ako sa altar. At first, hindi namin alam kung kaya kasi one month preparation lang,” shared Charlotte. (He told me to push through with the wedding immediately because he wanted to walk me down the aisle. At first, we were not sure if we could push through since we only had one month of preparation.)

A wedding photo posted by Law Tapalla Photography captioned “A Father’s Love ❤️” quickly went viral moving netizens to tears. As of this writing, it has 15,000 shares and 22,000 reactions.

Frank Franco shared that the father’s endless love was all he could give to his daughter on her wedding day. The same sentiment was shared by Aying Jomuad Babas, saying that a parent’s love is priceless.

If given a chance to talk again to her father, Charlotte said she would thank her Papu for the love and sacrifices. She would also tell him that he is the best father any daughter could have.

(Your love has been felt by a lot of people. You’ve become an inspiration. Thank you, for all your sacrifices. Thank you, because at the last moments of your life, you thought of me. I love you, Papu and I will miss you forever!) – Rappler.com