UP Fair: More than just a concert 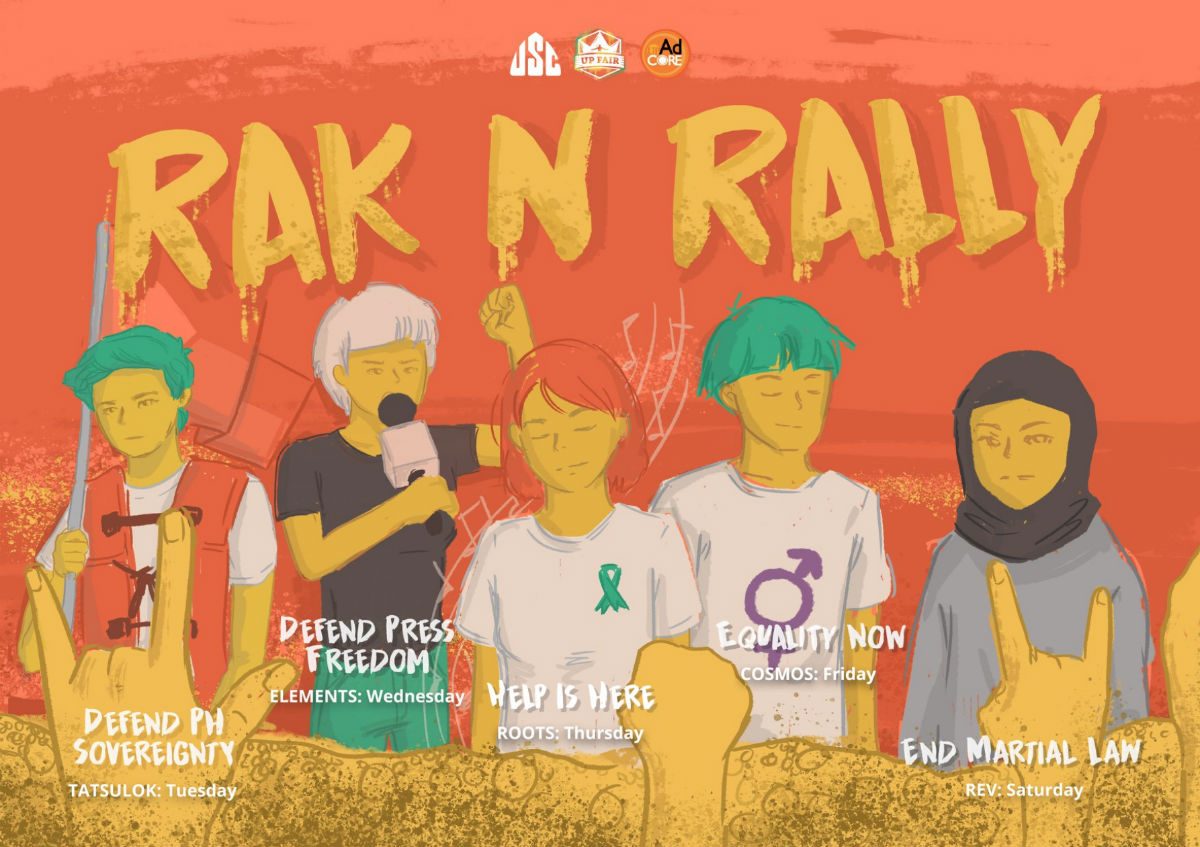 Facebook Twitter Copy URL
Copied
This year, UP Fair aims to be the voice of the masses

MANILA, Philippines – In these times, when concerts are everywhere, what makes one particular music festival stand out?

For many, the annual University of the Philippines Fair (UP Fair) is more than just a 5-day celebration of the country’s biggest and freshest talent. For the UP Fair concertgoers, it is also a platform for change. (READ: Why UP Fair is ingrained in the university culture)

“We have this event yearly to make our advocacies and social issues known such as press freedom, free education, state fascism, mental health, and more to a larger community. We want the masses to listen and to fight the good fight together,” said Gem Agudo, a 2nd year BS Business Economics student and fairgoer.

During the martial law era in the 1970s, UP Fair served as a platform for protest organized by UP students at the Los Baños campus. The students who gathered every year for the annual music festival then saw the fair as an avenue where protest and music can collide.

From a university affair, the music festival has then evolved into a gathering of music lovers and advocates alike. As attendance to the fair ballooned over the years, the UP Diliman campus eventually hosted its own UP Fair in a bid to reach a wider audience.

This 2019, UP Fair’s campaign revolves around the message “Rak N’ Rally.” According to Kenneth Eser Jose, UP Fair 2019 overall project co-head, they thought of Rak N’ Rally to inform the present fairgoers of the true essence of the fair and to remove the stigma surrounding what the word rally means.

“Rak N Rally because the current situation of our country demands for unity among a wide range of people committed towards a positive cause,” said Jose.

Rallies are usually associated with violence, needless noise, and chaotic environments. (READ: LOOK BACK: Philippine protests that turned bloody) But with Rak N’ Rally, organizers hope to show that it can be a peaceful gathering where people can discuss issues and enjoy at the same time.

In the spirit of redefining rally to fairgoers, the nights are bannering advocacies that are close to their organizations.

Each night, organizers are expected to raise awareness about issues related to gender, social inequality, and democracy, emphasizing the integral role of the platform in ingraining the movement towards societal betterment.

Check out the advocacies that headline each night of UP Fair 2019 below:

Tuesday, February 12 – To start off the week’s call, fraternities Alpha Phi Omega, Sigma Rho, and Tau Alpha chose this advocacy given their unified commitment to fight for a truly sovereign Philippines.

For the organizers, this advocacy remains relevant amid the continuous island-building and militarization activities at the West Philippine Sea even after an arbitral tribunal has ruled in favor of the Philippines in its case against China over the sea in July 2016. (READ: 2 years after winning, Duterte refuses to enforce Hague ruling)

Experts said sovereignty should be fought because without it, the rights and democracy of its citizens are not fully protected. Tatsulok takes this stand through various means and practices in the academe, law, and engineering among others.

Wednesday, February 13 – For the past years, UP Junior Philippines Institute of Accountants has handled the Freedom of Information campaign to push for the advancement of transparency and accountability in the country. In this age of disinformation, they stand with the press in their fight for the people’s right to be informed of the true state of society. (READ: Speak truth to power, keep power in check)

As of May 2018, 4 media groups in the Philippines recorded at least 85 cases of attacks and threats against press freedom during the first 22 months of President Rodrigo Duterte’s administration.

Thursday, February 14 – True to its stand, the UP Economics Society believes that there is a need to raise more awareness addressing mental health issues. For the longest time, this concern has remained to affect countless people.

With this in mind, they aim to bring a night where everyone is free to reach out and have a community who will fight their personal battles alongside them. (WATCH: What can you do to prevent suicide?)

Friday, February 15 – The Junior Marketing Association chose to advocate for gender emancipation because of the organization’s passion and endless capacity in fighting for a loving society with equal opportunity and acceptance, regardless of gender. (READ: WATCH: How did you come out?)

In the Philippines, the lesbian, gay, bisexual, transgender, and queer (LGBTQ) community says there is a lack of protections for them in schools and workplaces. They argue that stereotypes against them still persist. (READ: LGBTQ activists: We are tolerated but not accepted in the Philippines)

This organization promises to organize a night that expresses an indignant and unified support for the LGBTQ community.

Saturday, February 16 – Given their commitment to nationalism and to the Filipino masses, the Sigma Kappa Pi Fraternity has stood within the lines of our battles for the rights of the Filipino people. Through the UP Fair, they aim to send a powerful statement with their End Martial Law-themed night to cap of the weeklong campaign.

On December 12, 2018, the Senate and the House of Representatives approved the extension of Martial Law in Mindanao for a total of over two and a half years, or from May 23, 2017 to December 31, 2019 – nearly half of Duterte’s term.

With these advocacies, UP Fair promises to be eventful week for everyone who wants to take part in it. – Rappler.com

This year, tickets are sold at P80 for UP Diliman Student Discount, P160 for General Admission and P200 for walk-ins. For more details, kindly check UP Fair Facebook page.