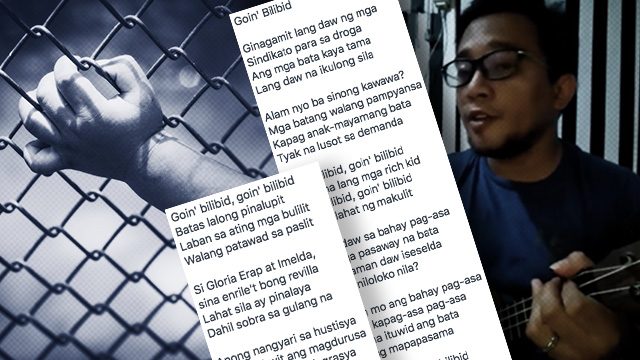 Lolito Go, who performed “Goin’ Bilibid” – a parody of the theme song of a famous children’s gag show – said he decided to use music to show his opposition since it reaches and engages more people.

“A lot of things has been said about the issue, and I figured it’s best to use music as a springboard for a healthy discourse about the subject, since popular music reaches and engages more people and would therefore amplify whatever message I’d like to bring forward,” he said.

In 2017, his original composition “Papatayin Kita” which condemned the government’s war on drugs also went viral.

The House of Representatives already approved its version of the controversial measure on third and final reading last January 28. House Bill No. 8858 lowers the minimum age of criminal responsibility from 15 years old to 12 years old.

“Anong nangyari sa hustisya? Bakit bubwit ang nagdurusa? Sa mga salot at disgrasya na dulot ng mga daga,” his lyrics goes. (What happened to the justice system? Why are children the ones suffering the disgrace caused by the real perpetrators?)

Under House Bill No. 8858, a child who is aged 12 to 18 years old and who commits a serious crime would be sent to the Intensive Juvenile Intervention and Support Center inside the nearest youth care facility, also called Bahay Pag-asa. (READ: Highlights of House bill lowering criminal liability age to 12)

But Go believes that intervention and support centers will only limit the hopes of children and, worse, make them commit more offenses given the inadequate number of intervention centers and personnel. (READ: Lowering criminal liability age to 12 ‘still attacks children’ – Makabayan)

Go said he is still hopeful that those in favor of the measure will have a change of heart. He also appealed to senators to reject the measure.

“Unlike the representatives, your hands are not that tied. We depend on your independence, we rely on your principles and wisdom,” he said. – Rappler.com