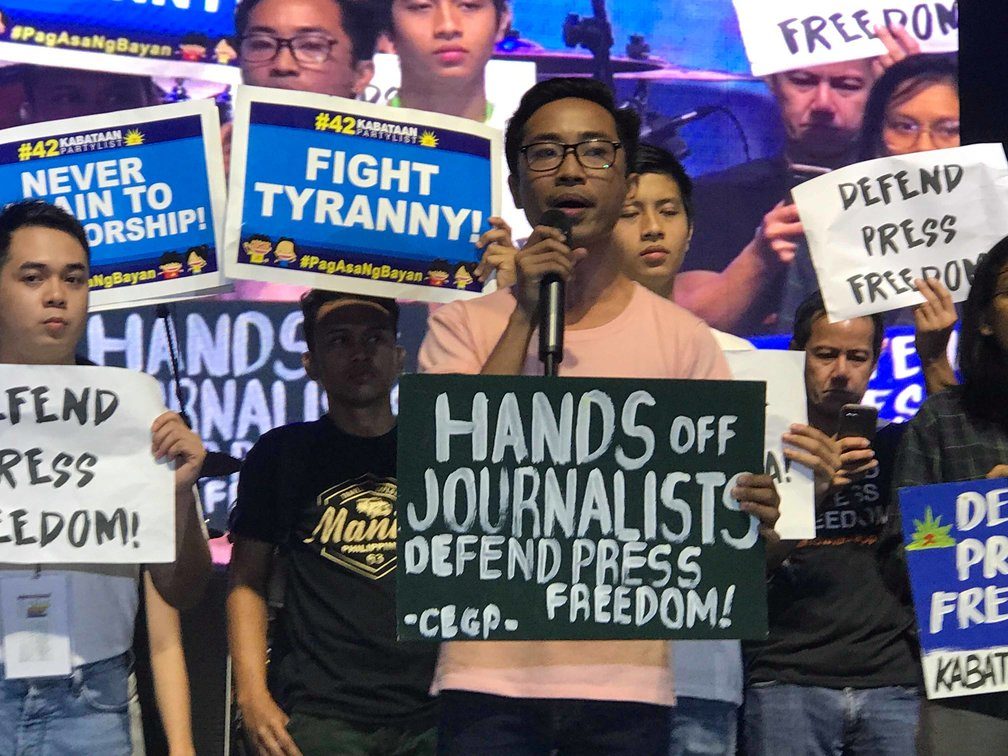 Facebook Twitter Copy URL
Copied
The theme of this year's UP Fair is 'Rak N’ Rally', with Ressa originally scheduled to talk about press freedom

MANILA, Philippines – Thousands who attended the University of the Philippines (UP) Diliman’s UP Fair expressed their solidarity with Rappler CEO and executive editor Maria Ressa who was arrested over cyber libel charges on Wednesday night, February 13. (READ: Despite NBI flip-flop, DOJ to indict Rappler for cyber libel)

Ressa was scheduled to talk about press freedom Wednesday as part of the UP Fair “Rak N Rally.”

Her arrest at the Rappler office by agents of the National Bureau of Investigation prevented her from going to the event. Instead it was Rappler reporter Patricia Evangelista who read Ressa’s statement.

Event organizers alloted time during the event for people to condemn the latest attack on media. Representatives from various organizations called for vigilance in defending press freedom.

Callueng, who heads the oldest alliance of college editors in the country, said that people must take part in fighting for the independence of the press – “a battle which involves everyone.”

“If this is another of several attempts to intimidate us, it will not succeed…. We will continue to tell the truth and report what we see and hear. We are first and foremost journalists, we are tuthtellers,” said Evangelista reading Ressa’s statement.

Evangelista, who wrote a number of investigative pieces on the government’s war on drugs, concluded by thanking everyone who support Rappler.

Meanwhile, UP student regent Ivy Taroma led the participants in offering a minute of silent protest for press freedom, while asking the people to light up their phones as an expression of support for Rappler and its executive. Aside from the groups present at the Fair’s protest, various organizations and institutions also issued statements which expressed their solidarity for press freedom and condemnation of the government’s attacks on media. (READ: ‘Persecution by a bully government’: Journalists, advocates slam arrest of Maria Ressa)

Here are their statements:

Arresting Maria Ressa is an admission of this administration's move to silence the press who aims to deliver the true state of our nation.

UP Solidaridad, together with its member publications and writers’ organizations, believes that any attempt to muzzle the press is never acceptable and that we should unite in defending the press from any form of attacks.

Let’s give our all out support as Lasallians to Rappler. Let’s defend press freedom. Let’s make our voices heard. Let’s vote with our feet and stand with Maria Ressa! — Br. Armin Luistro FSC