‘Don’t be a headline reader’: Cagayano journalists speak up against disinformation 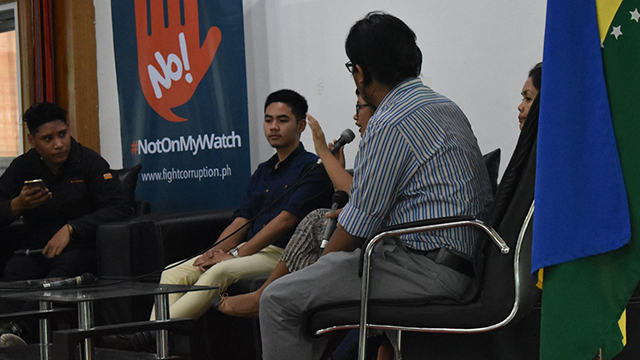 Some 400 students from various colleges and universties in Cagayan and Isabela attended the #MoveCagayan: Social Good in the Digital Age Forum at at the Cagayan State University-Carig.

Joshua Kahulugan, editor-in-chief of The Northern Forum, reminded the crowd of recent reports of bomb threats in SM Cagayan and the provincial capitol, which were shared fast on Facebook and messenger apps. It was only after the rumors had spread that he found out it was an old news piece from 2013.

Student leader and The CSU Communicator‘s Julius Catulin chimed in with another recent rumor that spread across the Cagayan State University system.

“May news na ‘kinakalat na free ang ating diploma, toga, at TOR (News was being spread that our diplomas, togas, and transcripts of records were for free),” he shared. “We were shocked because we didn’t know this. So we verified this news and found out that all these free things were for Catanduanes State University, not Cagayan State University.”

Forum moderator and Rappler correspondent Raymon Dullana also shared the confusion that occurred during Typhoon Ompong. Locals weren’t sure whether Ompong was classified as a typhoon or a supertyphoon because the Philippine Atmospheric, Geophysical and Astronomical Services Administration (Pagasa) and foreign meteorological services had conflicting reports at one point.

Rappler managing editor Glenda Gloria acknowledged that “to share what you haven’t read is human nature.”

So how can the Cagayano community, and the world at large, avoid confusion and potentially dangerous errors?

“First, you have to verify the source of the post,” Gloria continued. “Second, you have to look at the dates. Sometimes the event is true, but it’s old and has a different context. Third, be aware that you’re being manipulated.”

“Don’t be a headline reader,” Kahulugan stressed, recalling how he would be tagged as biased for one side of an issue by people who clearly didn’t read the article itself, and just based their opinions on the title.

“As much as possible, use first-hand information,” Catulin added.

“Disinformation, propaganda, and lies are the new weapons of choice of the corrupt, bad leaders, bad governments all over the world,” said Gloria in conclusion. “For you to embrace that is very significant. You have to be aware that this is war. Information is power, and it only serves the good only if you allow it to be used for good.”