Laguna newspaper out to prove print is not dying 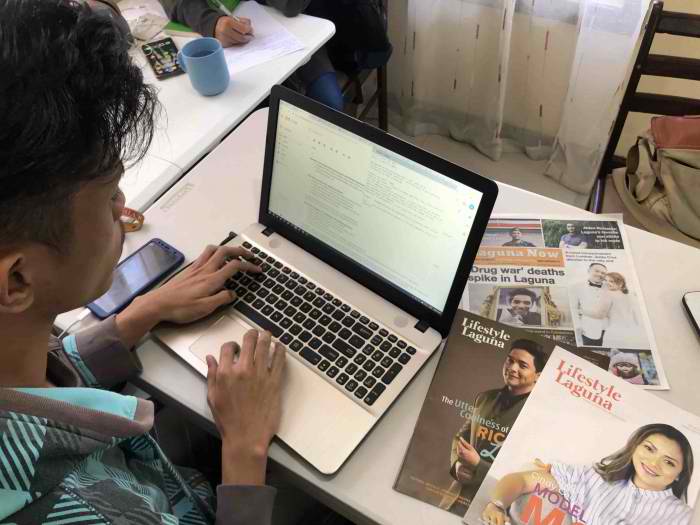 LAGUNA, Philippines – While most news organizations are turning digital, a media start-up in Santa Rosa, Laguna, has ventured into the print business with the goal of telling stories of the community.

Laguna NOW, a newspaper founded by former journalist Ayishah Conde, addresses the lack of a newsweekly in the northern part of the province.

“We saw a void here in Laguna. There’s no daily. Daily information comes from the broadsheets like Inquirer, mainly because Laguna is located near Manila,” Conde said.

Banking on her experience and network of journalists, and with the support of her family, Conde put up a media company named Conde Media Publishing Services. It was a dream come true for her, her husband, and 4 children.

“It was our brainchild. When we moved here [Laguna], we thought of going back to what we love to do,” shared Conde.

Aside from publishing a newsweekly, the media start-up also releases a monthly magazine, Lifestyle Laguna, which features tourist spots, restaurants, and celebrities who live in the province.

People are consuming more information today than before. With the rise of digital media, people’s access to information is just a click away. (READ: Over 3.4 billion people actively use social media – report)

So why take a risk and get into the print business when newspapers are moving online? (READ: How are newspapers surviving in the digital age?)

For Conde, print won’t die anytime soon. As a former journalist and media observer, she believes that it will still take decades for the newspaper to vanish.

“In other countries perhaps, but in the Philippines, I don’t think so. We may have the most number of internet users in the world but some people, especially in the provinces, still don’t have access or don’t know how to use it, especially the old ones,” shared Conde.

She added that their target market are the retirees in their locality who don’t access the internet on a regular basis. She and her team conducted a demographic research before their operations went in full swing.

“We surveyed the northern part of Laguna and we found that people living here are retirees who still enjoy reading the paper,” said Conde.

A recent report showed that the time spent online by Filipinos daily soared from 9 hours and 29 minutes last year to 10 hours and 2 minutes this year, the highest in the world. (READ: Filipinos spend most time online, on social media worldwide – report)

Conde said that it’s their love of community journalism that inspires them to do what they do. “The people here have interesting stories to share. Their stories are rich and need to be told,” Conde said.

Laguna NOW covers a wide range of issues – from local politics, entertainment, and lifestyle. But their coverage is not limited to the happenings in the province.

According to Conde, their paper also covers issues of national interest, but they make sure that these are still relevant and interesting to their local readers.

Explaining how they do it, Conde said, they are “localizing” national issues to catch the attention of every Lagunense.

“We tackle national issues and make sure to add local flavor so these stories would be more interesting to the community,” added Conde. 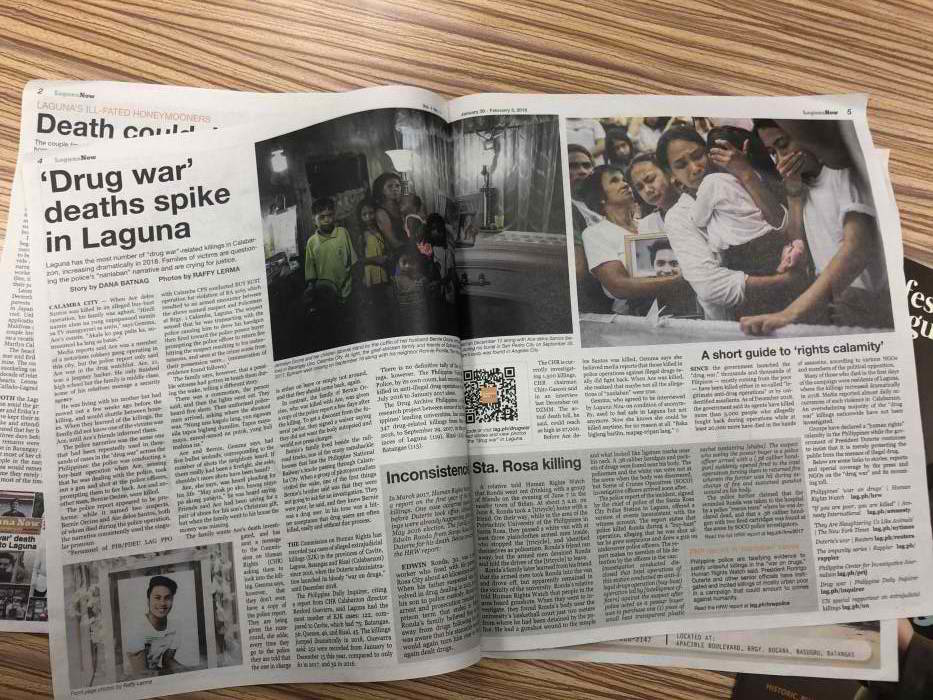 In their first issue, the newspaper ran a story on the administration’s bloody drug war and cited the fact that Laguna had the most number of drug war-related deaths. Their team did a series of interviews and got in touch with the families of the victims who expressed their disapproval of the police’s “nanlaban” (resist) style in running after drug suspects. (READ: Duterte gov’t allows ‘drug war’ deaths to go unsolved)

While getting advertisers remains as the biggest hurdle for the media start-up, retrieving documents from government offices also poses a major challenge.

Interviewing people on the ground is a problem too, shared Lalusin. “Takot sila sa interview. Parang iniisip agad nila na may ginawa ba silang masama,” he said. (They fear interviews. They think that they did something wrong.)

But for Conde, these hurdles are just half the battle.

Asked how are they going to tap millennial readers, Conde said they will strengthen their social media presence once their print operations become stable.