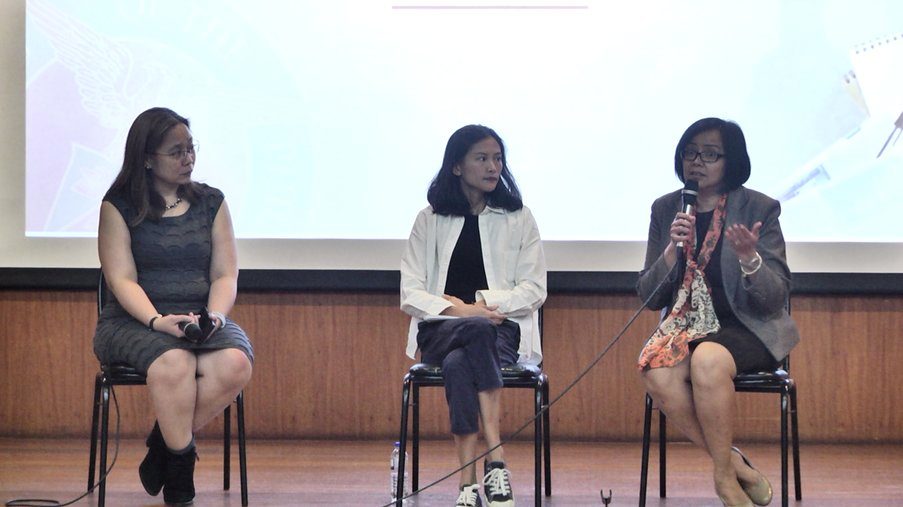 MANILA, Philippines – How do Philippine laws fare in the battle against disinformation?

University of the Philippines (UP) law professor Gwen de Vera zeroed in on the need to understand social media platforms to consider sound policy interventions in a forum on Tuesday, March 12.

“The starting point is learning about the platform, learning about what goes on in terms of content, other activities, and the business model, so that any policy intervention…will be able to address problems,” she said.

MovePH, in partnership with the Harvard Law School Alumni Association of the Philippines, held #MoveDiliman: Social Good in the Digital Age at the Malcolm Theater, University of the Philippines (UP) College of Law.

The fourth leg of MovePH’s series of forums, #MoveDiliman tackled the roles of legislation in combating disinformation.

De Vera highlighted how platform algorithms sift and show content generated for and by users. She explained that such impact suggests the need for policies on responsible social media use and regulation.

She said the Philippines still has a long way to go in terms of laws on social media use, compared to other countries. “This is where we could be. This is why we have to examine the adequacy of law, or how we can make law and regulation adequate,” De Vera said.

She cited the recommendations of the Digital, Culture, Media and Sport (DCMS) Committee of the United Kingdom, and the Australian Competition and Consumer Commission (ACCC)  on data breach, disinformation and fake news on Facebook; and pm the impact of social media on quality of journalism and news, respectively.

One DCMS Committee recommendation is te designation of an independent regulator to oversee a compulsory code of ethics for technology companies.

De Vera related this to the Commission on Elections’ regulation policy requiring candidates in the May elections to register their social media pages, but added that the policy still needs improvement.

“What’s their primary way of regulating? Aalamin ba nila lahat ‘yung ibang mga pages (Will they try to find out all other pages) that are under their name but which are not official pages? Are they supposed to register influencers who are actually paid to do certain posts?” De Vera asked.

She also discussed Philippine laws that protect online users’ rights, such as the Data Privacy Act and the Anti-Cybercrime Law which has provisions on cyber libel.

She also explained users’ responsibility to use tools to protect their privacy. She cited a Supreme Court  ruling that favored St Theresa’s College in Cebu City which banned students from attending their graduation ceremony as they violated the school policy by posting “bikini photos” their social media pages in 2012.

The parents of the students filed a petition before the Court, and argued that the photos were illegally obtained, as the privacy settings of the post were customized to be visible only to the 5 students themselves. The Cout had ruled that there was not enough corroborative evidence to prove this.  (LOOK: SC: STC did not violate students’ right to privacy)

De Vera said jurisprudence in the Philippines and policy instruments “haven’t gone far in terms of false information that’s been generated and shared,” and are still currently limited to data privacy, and defamatory and libelous content.

In the panel discussion, law students raised the issue of weaponizing libel and other laws against the press.

“It becomes oppressive if there isn’t any sufficient basis to move forward with a criminal complaint. More often it’s journalists who become the victim while having to sit through, and for some to be detained in the course of trials,” De Vera said.

She also mentioned efforts to decriminalize libel, as many public figures resort to filing criminal suits or huge civil cases for damages that cost huge amounts against journalists.

One of the forum speakers, Rappler’s Head of Research and Strategy Gemma Bagayaua-Mendoza, said that legislation has been used to go after legitimate press, with claims that they’re “fake news.”

“We are wary of legislation right now because it’s the government that’s after us,” Mendoza said.

De Vera said legislation is not the only way to go for social media regulation.

Challenge the lies, engage in dialogue

Mendoza also talked about challenging lies as a way to educate one’s own audience and combat disinformation.

Rappler Malacañang reporter Pia Ranada stressed that the recent developments related to  Philippine democracy should be “galvanizing” enough to urge people to act, but many still choose to be apathetic.

She added that it is not just the journalists’ responsibility to combat disinformation, but the duty should fall on “on everybody’s shoulders.” – Rappler.com

Sofia Virtudes is a Rappler intern. She is a BS Development Communication graduate from the University of the Philippines Los Baños.