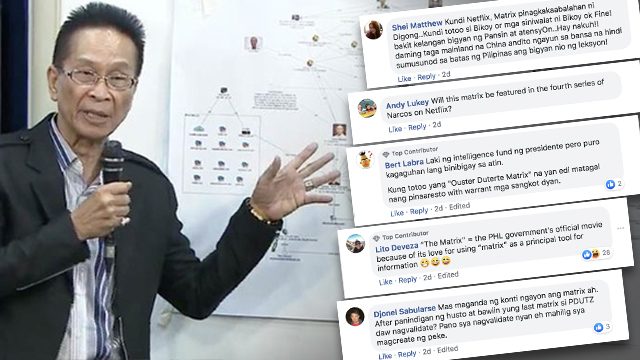 MANILA, Philippines – Step aside, Neo. Someone else is in charge of The Matrix now.

On Wednesday, May 8, netizens poked fun at the new “matrix” released by Malacañang, tagging critics said to have been conspiring to oust President Rodrigo Duterte.

In the new diagram, the Liberal Party, Magdalo party, journalists, and media organizations were tagged as part of a ‘conspiracy’ to boost the Senate bids of Otso Diretso candidates.

But netizens did not buy the idea of the revamped “matrix.”

For Emanski Elsinki, releasing a diagram that lacked evidence was a waste of taxpayer’s money. The same sentiment was shared by Beth Romana.

Meanwhile, some said the President was not actually watching Netflix at his home in Davao, as shown in a recent viral photo, and instead was busy creating the “matrix.”

Battle of the matrices

Some netizens created their own versions of the diagram. Darren Javoer Gonzales’ version of the matrix included Marvel superheroes, where Avengers were part of the ploy to destabilize the government and oust the President.

Meanwhile, Twitter user Vino Orajay took a photo of a diagram they were studying in class and captioned it with: “The new ‘Oust Duterte plan’ matrix.”

Froilan Gallardo’s version involved cockroaches as destabilizers of the government.

During Duterte’s speech in Bohol on May 8, a cockroach crawled on the president as he was extolling the virtues of the candidates was endorsing for next week’s midterm polls.

Last month, a so-called “Oust Duterte Matrix” was released to the public by Malacañang that implicated independent news groups such as Rappler, Vera Files, and the Philippine Center for Investigative Journalism to an alleged plot to oust President Duterte.