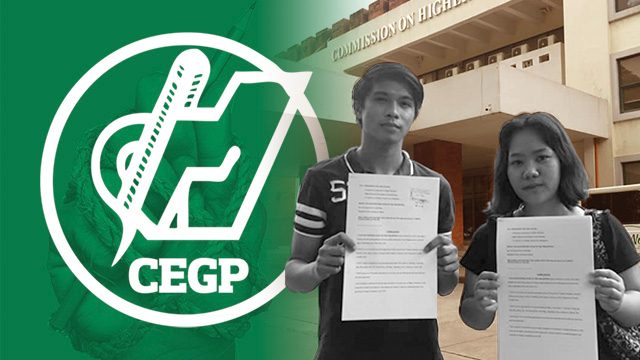 Facebook Twitter Copy URL
Copied
'The vanguards of light and truth in various campuses are being the next targets of control by the government and school administrations,' says College Editors Guild of the Philippines national president Daryl Angelo Baybado

MANILA, Philippines – The College Editors Guild of the Philippines (CEGP) on Wednesday, July 24, filed a complaint before the Commission on Higher Education (CHED), seeking an investigation into violations of Republic No. Act 7079 or the Campus Journalism Act of 1991.

CEGP said in a press statement that the complaint seeks a thorough CHED investigation that would lead to resolutions and sanctions against those the committed the campus press freedom violations as provided under RA 7079.

“The vanguards of light and truth in various campuses are being the next targets of control by the government and school administrations. Sadly, the incidents of intimidations among student journalists are happening amid the presence of RA 7079 or the Campus Journalism Act of 1991,”  Baybado said.

“Signed into law on July 5, 1991, to uphold and protect press freedom even at the campus level, the legislation proved that in the 27 years of its existence, it served otherwise. For the long run, the seriously flawed law has done nothing but to put campus press freedom in jeopardy,” he added.

Baybado also likened the prevailing press freedom situation in the country to that under the regime of the late strongman Ferdinand Marcos.

“Once dubbed as the freest press in Asia, the Philippine press is experiencing deja vu of its former suppressed state under the late dictator Marcos regime: silencing critics, censorship, and killings, which defines the media situation today,” he said.

CEGP is the oldest, broadest, and only-existing alliance of tertiary student publications in the Philippines and in Southeast Asia, with over 750 member publications from more than 500 schools in 68 provinces and cities nationwide.

In the complaint, the CEGP stressed that the intimidation of the press did not only apply to mainstream and alternative media, but has extended to campus journalists as well.

Baybado said “student publications are becoming a subject of repression and suppression, especially in the form of school administration’s manipulation that was intensified by no less than the Duterte regime through the Universal Access to Quality Tertiary Education Act or the Free Higher Education Law.”

“Aspiring to fully silence the press, Duterte takes extra efforts to have control on school publications – which in history – held essential roles in keeping Filipinos informed and in pushing them to fight for rights and freedom,” he added.

Since 2010, CEGP has documented almost 1,000 campus press freedom violations categorized but not limited to: