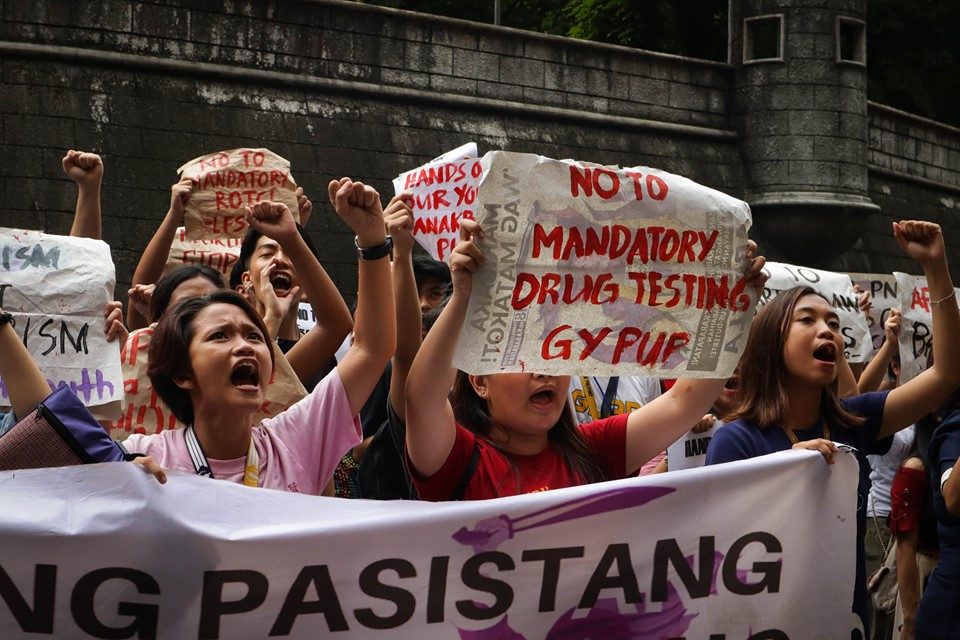 MANILA, Philippines – In simultaneous protests on Thursday, August 15, students of the Polytechnic University of the Philippines (PUP), youth, and activist groups criticized the mandatory random drug testing of students from the 15 colleges of the university.

On the same day the drug tests were held, students from different groups such as the League of Filipino Student (LFS)-PUP, the College of Communication Student Council, and PUP SPEAK marched from the PUP main building in Manila to streets surrounding the university.

The council added that since the student handbook revision 2019 is yet to be finalized by the Board of Regents, the highest policy-making body of the university, the mandatory random drug testing should not have been implemented.

“CAFASC believes that the mechanisms and guidelines of the mandatory random drug testing are still vague to the majority of the students, therefore consultation and orientation shall be provided to the students of the College for them to fully understand the exact parameters of the said matter,” the statement read.

University officials however said that they conducted a seminar among students and that the activity was mandated by the Commission on Higher Education (CHED). One of them added that what happened on Thursday was merely a dry run.

In a report by The Catalyst, PUP President Emanuel de Guzman was quoted as saying that they held a drug awareness seminar before the drug testing.

CAFASC urged the administration to discuss the various issues related to these drug tests to its students.

The PUP College of Political Science and Public Administration (CSPA), on the other hand, said it’s not clear where the directive came from.

(And most of all, there is no clear standard of the said Mandatory Random Drug Testing, which may put the students at risk.)

The CSPA Student Council pointed out that the students were only given a limited period of time to get their parents’ consent as posted on the Student Information System (SIS). The university also didn’t mention the consequences if parents refuse to give their consent.

(The CHED memorandum no. 18 suppresses the right of the Iskolar ng Bayan, and it’s a big mistake for for the PUP administration to implement this in the absence of clear standards and in the face of strong protests by the students.)

PUP clarified that the drug testing was in accordance with the CHED’s Memorandum Order 18  to ensure that universities are drug-free communities.

As of writing, a total of 120 of the 800 students from the 15 colleges of the main campus were randomly selected for drug testing, the school said. This will continue in the next few days.

In an interview done by The Engineering Spectrum, PUP Vice President for Student Affairs and Services Zenaida Sarmiento said that list of those tested is confidential. She also stressed that only a sample population of students will be tested while the university officials, Executive Committee, security guards, and other staffs are required.

Sarmiento added that the testing that happened on Thursday was only a dry run, and even the university officials are not informed about the exact date of the next drug testing.

Rappler has yet to receive a response from PUP on the status of proposed student handbook revision that includes changing the dress code, raising the maintaining general weighted average, and pushing for mandatory drug testing.

PUP said students who test positive would not be dismissed but would undergo appropriate intervention or rehabilitation, based on to the PUP Student Handbook. It also guaranteed confidentiality of results.

“Confirmed positive results shall not be a basis for disciplinary action unless the student concerned is held liable for violations of other University rules and regulations.”

Youth and progressive groups also protested the presence of policemen inside the PUP main campus on Thursday.

In a report by The Catalyst, university officials said the policemen are students of the Open University.

Senator Ronald dela Rosa, at a recent hearing of the Senate committee on public order and dangerous drugs which he chairs, said he wanted increased police patrols at the PUP to deter communist recruitment in the state school. – Rappler.com