MANILA, Philippines – In an effort to assert academic freedom, University of the Philippines (UP) students and faculty members united in a systemwide walkout to protest against police and military intervention in schools on Tuesday, August 20.

UP Student Regent Isaac Punzalan released a memorandum last August 14 declaring August 20 as a systemwide “Day of Walkout and Action” to assert the state university’s right to academic freedom.

The call for a systemwide walkout came after Senator Ronald “Bato” dela Rosa, who chairs the Senate’s public order and dangerous drugs committee, proposed increasing the military presence in state universities to curb recruitment and alleged kidnapping of students by leftist groups. (READ: ‘Crumbling democracy’: Groups call for end to attacks against the youth)

In a statement, UP School of Economics stressed that the state university will remain firm despite the attacks to activism and academic freedom.

“UP shall never be silenced— for in times when our very institutions and freedom are under siege, we must spark collective action and assert our rights for our university and for our country,” the group said.

The UP Office of the Student Regent warned that military presence in schools will hamper the rights of students and teachers to express, study and practice their own principles and beliefs to serve the people.

“We shall fight for our university to remain a zone of peace and a sanctuary for the oppressed and marginalized, where academic freedom thrives in the pursuit for genuine social change for the welfare of the Filipino people,” it said in a statement.

Students reiterated the 1989 agreement between the UP administration and the Department of National Defense (DND) which prohibits the entry of state forces in the university except in cases of hot pursuit or other emergencies.

UP Business Administration Council emphasized that the proposal to allow military presence in state universities threatens academic freedom as student movements, especially in a bastion of student activism like UP, might be silenced.

“We believe that student activities and activism should be empowered and strengthened – they should not be silenced by those in power in the struggle to create positive change in our society,” UP BAC stressed.

The University of the Philippines Speech Communication Association (UP SPECA) said the government only continues to use the situation “to revive the 1950s Anti-Subversion Law, which claims that any form of dissent against the government can result to the arrest of an individual.”

“This intensifies the attack on the students’ right to speak up and analyze the current situation of our nation. This is the how the rhetoric of the administration works: it continues to consolidate power by pacifying the ever-growing student movement to forward their own interests,” the group stressed.

Lumad students from Bakwit School also joined in the protest at the UP Diliman Palma Hall as they called for their right to education and condemned militarization in their communities.

Aside from UP Diliman, other UP campuses – Baguio, Cebu, Los Baños, Manila, Mindanao, Visayas, Tacloban, and Pampanga – staged their own protests in their respective campuses to take part in the systemwide walkout.

Here are some photos from the protests led by various UP campuses nationwide: 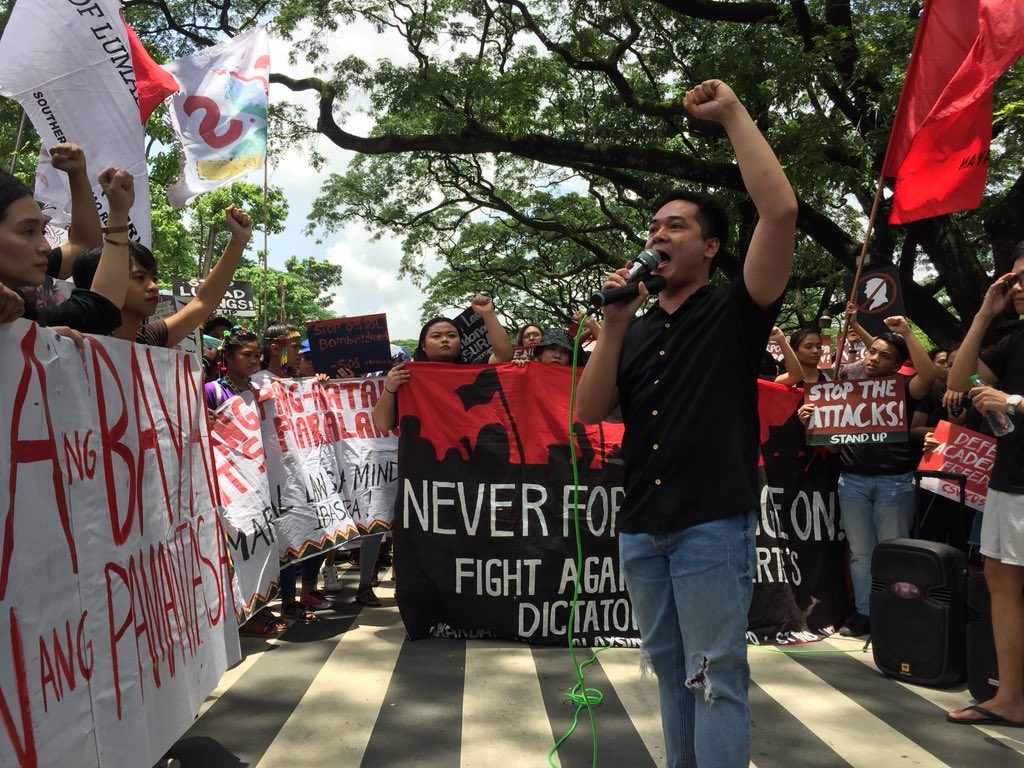 In UP Visayas, students join the protest against the threats to academic freedom through police and military intervention and declaration. | via @RhysLaika pic.twitter.com/GRekyjeofc