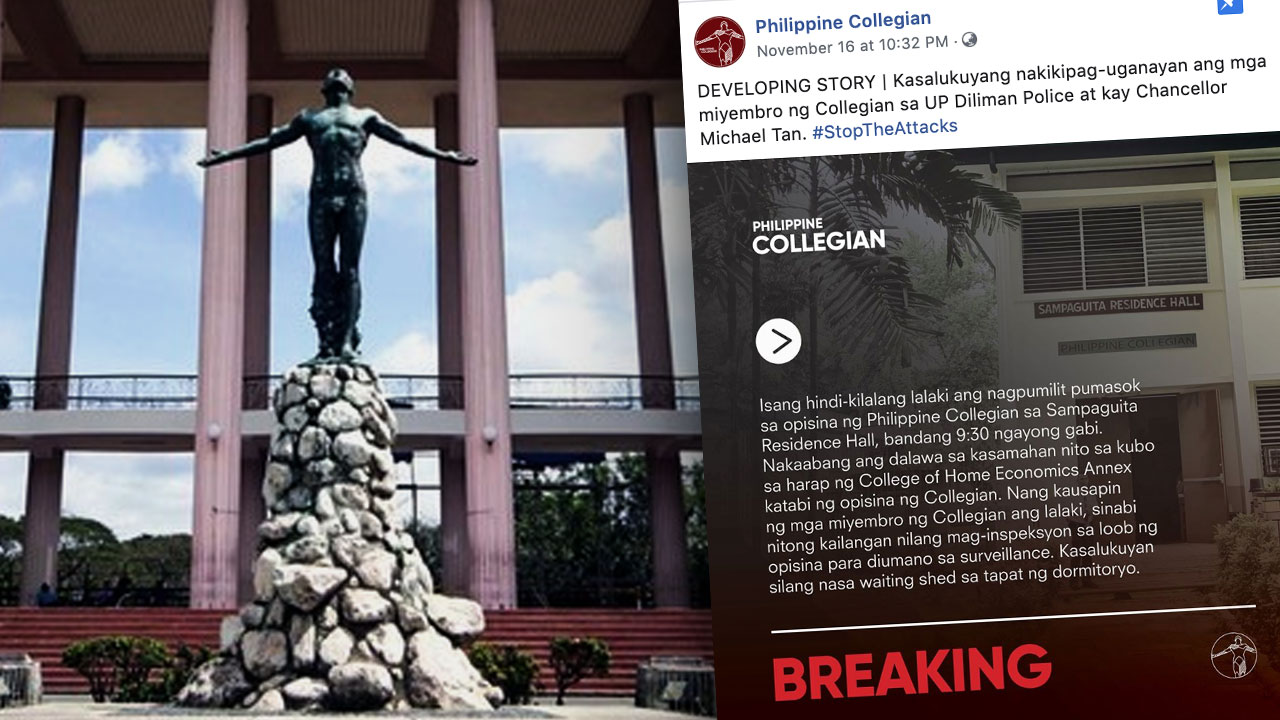 MANILA, Philippines– Student groups from University of the Philippines (UP) Diliman slammed attacks of intimidation against the Philippine Collegian, the official student publication of UP Diliman, after it reported that a man attempted to enter its office on Saturday night, November 16.

In a Facebook post, Philippine Collegian said an unidentified man attempted to enter its office at the Sampaguita Residence Hall at around 9:30 pm on Saturday, November 16, saying he needed to conduct an inspection for alleged surveillance.

Two other men believed to be the stranger’s accomplices were seen waiting near a hut in front of the College of Home Economics Annex, which is located beside the Philippine Collegian’s office.

The man who attempted to enter the office was later taken into custody by the UP Diliman Police and was identified to be 28-year-old Wilfredo Manapat.

Manapat explained to the UP Diliman Police that he was only looking for his colleagues at the time– in stark contrast to his earlier claim that he needed to inspect the office for surveillance.

While the UP Diliman Police gathers additional information regarding Manapat’s identity, it has freed his two other accomplices since only Manapat attempted to enter the Philippine Collegian Office.

“This is a clear attempt of state oppressors to unnerve media entities that maintain a line of reportage reflective of the real social-political situation of the public,” it said.

Student Alliance for the Advancement of Democratic Rights in UP pointed out the recent attempt to enter the Philippine Collegian’s office can be likened to the recent police raids of several offices and residences of progressive groups in Manila and Bacolod that led to the arrest of 58 activists.

(What happened to Philippine Collegian is a clear attack on the democratic right of students to reveal and amplify the voices of the oppressed through independent reporting.)

It recounted how just a few months ago there were concerns regarding proposed entry and intervention of the police and military in state universities including UP after Senator “Bato” dela Rosa said he wanted increased police patrols at the Polytechnic University of the Philippines (PUP) to deter communist recruitment in the state university.

Meanwhile, the UP Engineering Student Council said that the recent incident poses a threat to students, especially groups and publications that show the state of the nation through its reports.

(Although the Philippine Collegian became the target of an alleged inspection, it won’t stop the publication of the students of UP Diliman. Defenders of free press will continue to fight for the freedom to report within and outside the school.) – Rappler.com