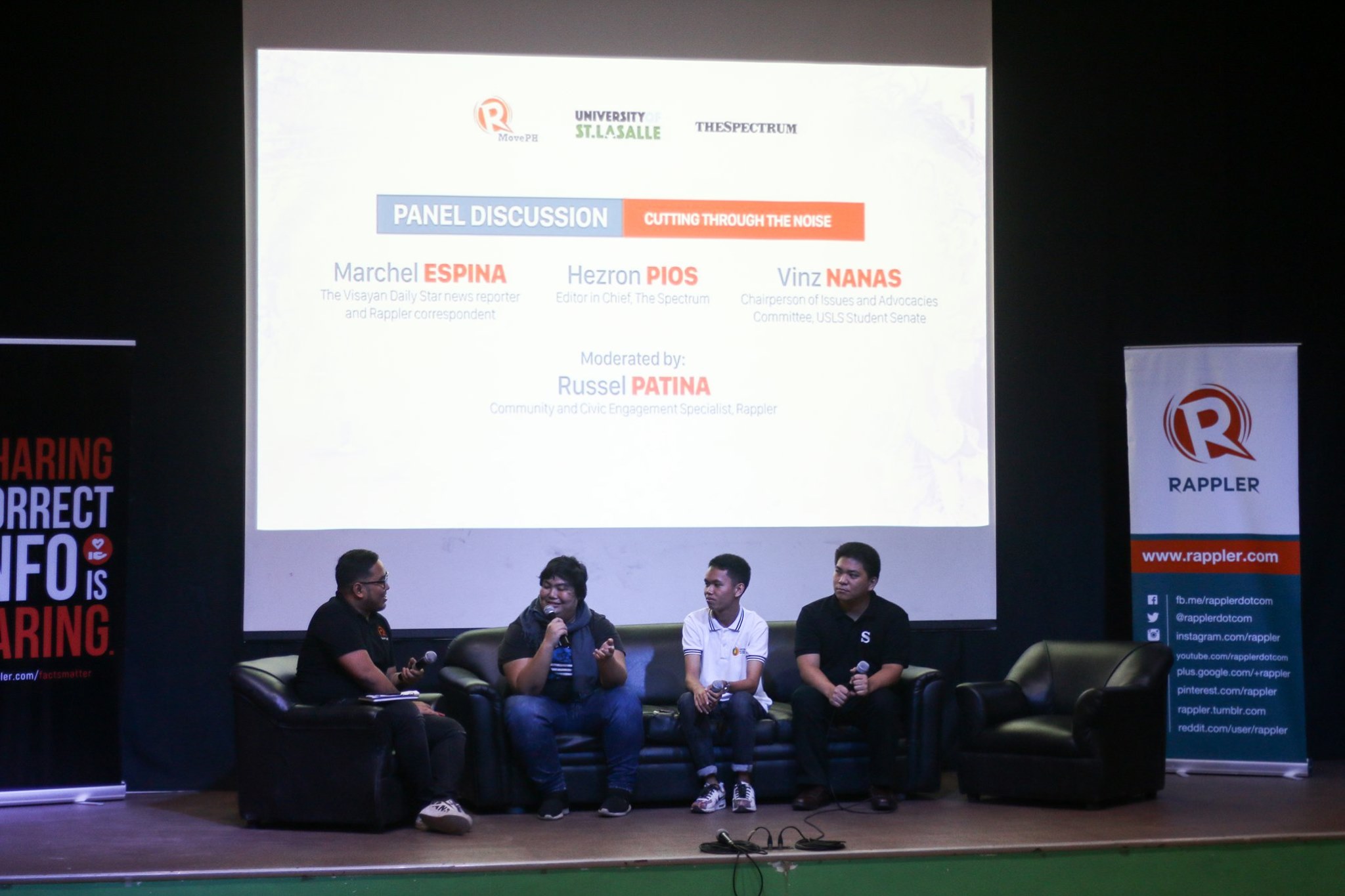 MANILA, Philippines– At a time when propaganda and disinformation are rampant on social media, are journalists solely responsible for upholding the truth?

During #MoveBacolod: Social Good in the Digital Age forum, journalists and student leaders in Bacolod City underscored how everyone plays a role in countering disinformation and keeping digital spaces safe.

Led by Rappler’s civic engagement arm MovePH in partnership with The Spectrum, more than 200 students and citizens attended the forum at Mutien Marie Auditorium A in University of St La Salle (USLS), Bacolod City, to learn about the importance of fact-checking.

In her welcome remarks during #MoveBacolod, USLS Dean for Student Affairs Dr Rowela Chiu emphasized the youth’s vital role in nation-building in a fast-paced generation.

“It is a responsibility of everyone to uphold the truth…. All citizens should be involved in nation-building,” she said.

During the panel discussion, Marchel Espina, Rappler correspondent and The Visayan Daily Star news reporter, highlighted that journalists especially must take great care in verifying and cross checking the information they receive both online and offline, and avoid blindly accepting the word of officials and people in authority.

Negros Island has recently been thrust into the spotlight after simultaneous raids of government authorities in Negros Occidental led to the arrest of 57 individuals. A string of shooting incidents in the two Negros provinces grabbed headlines this year.

“We always have to exert extra effort to go the extra mile, to really see what’s going on because if we just print what they said happened, we won’t really know that it’s true,” Espina said.

When committing mistakes, Espina said that just like officials, journalists and citizens  have to be accountable for what they post, say, and do. She shared that while journalists can listen to criticism to improve their reporting, trolls that only muddle conversations online should be documented or monitored to keep social media feeds clean.

“We don’t want to be peddlers of disinformation and misinformation because the community relies on us,” Espina said.

“We take criticism very seriously. If there’s a need to improve, we will improve because we want to be better in our reporting. If there are trolls, if there are threats, we document it. We don’t mind the social media trolling; it comes with the job,” she added.

Meanwhile, The Spectrum editor in chief Hezron Pios pointed out that even campus publications aren’t spared from the swarm of online trolls or negative comments when it comes to the stories that they publish.

“It has happened a lot of times already that when we post something controversial, some comments were founded on hate, sarcasm, mockery, so we don’t stoop down to their level. We don’t respond to them because when we do, we become keyboard warriors…. You’re dealing fire with fire,” he shared.

Pios added that while campus publications might be intimidated to pursue certain issues and topics due to the possible backlash and the online atmosphere created by trolls, this shouldn’t stop them from writing stories that matter to them.

“It’s always a challenge to defend our function, our purpose as a campus publication because some critics might find our stories too controversial, too out-of-topic. Some of them even published or commented in our Facebook posts to just stay in our lane…. As journalists, you have to hold your line; you have to pursue the story,” he said.

Pios stressed that even publishing an erratum both in print and online when committing mistakes is one way that campus publications can be accountable for the content they produce, and do their part in avoiding misinformation.

Aside from journalists, average citizens and student leaders can also find ways to cut through the online noise and use social media for social good.

USLS Student Senate Chairperson of Issues and Advocacies Committee Vinz Nanas shared that the student government used social media as a platform to create awareness and to speak out.

After  Governor Eugenio Jose Lacson assured Negrosanon youth that Negros Occidental remains to be a coal-free province, the USLS student senate penned an open letter urging provincial leaders to remain steadfast to their commitment to protect the environment and allow the development of environment-friendly programs in the province.

Nanas shared how people can use social media to amplify issues and advocacies, especially when most Filipinos use these platforms.

“You can advocate or we can actually voice out in different aspects not only through rally but also in social media. You can make a big difference aside from digital activism. Actually, it could impact people because we are into social media,” Nanas said. – Rappler.com