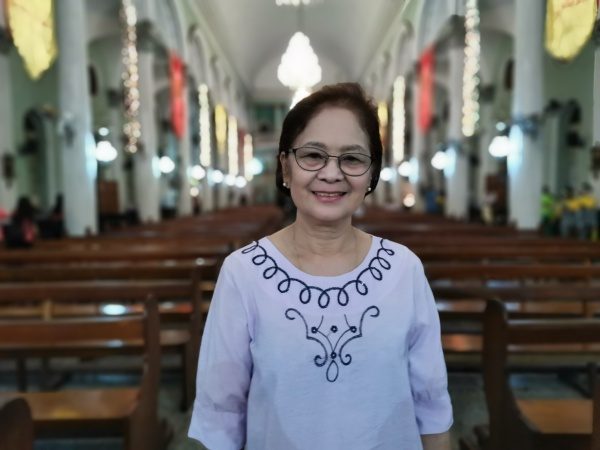 Facebook Twitter Copy URL
Copied
'The divine Santo Niño has brought a lot of blessings into my life over the years. That’s why I have to give back tenfold, as thanksgiving for all the graces I’ve received,' says Emma Galindez-Zapanta

ILOILO CITY, Philippines – For 67-year-old devotee Emma Galindez-Zapanta, being the hermana mayor for this year’s Dinagyang Festival celebration was her way of giving back.

They serve as stewards of sorts of the image of the Señor Santo Niño for the duration of the Dinagyang Festival, leading the 9 nights of novena mass at the parish of San Jose de Placer and taking care of other affairs and occasions related to the Santo Niño.

Zapanta and husband Noel succeeded the couple Sarah and Rito Carlo Peña, prominent Ilonggos who served as the hermana y hermano mayor of the Dinagyang from 2018 to 2019.

Coming from a humble background, the installation of the Zapantas marked a poignant turn in the history of Iloilo’s annual revelry in honor of the Santo Niño, as the trappings of the hermana and hermano are usually bestowed on well-off patriarchs and matriarchs of moneyed Ilonggo clans.

Most notably, the first-ever Dinagyang hermano y hermana mayor were Dr Antonio and Rosa Ocondriz Caram, from a well-respected political family in Iloilo, who held the title and responsibility until 1975.

A retired employee of the University of San Agustin in Iloilo, Zapanta admitted that she was shocked and hesitant at first to accept the role, given their family’s modest resources, but with the reassurance and support of her close circle in the Parish of San Jose de Placer, she relented and wholeheartedly took on the duty. She recounted that when Reverend Father Raymundo Edsel Alcayaga approached her for the role, she was shocked because she didn’t expect it at all.

“I’m a long-time member of the Cofradia del Santo Niño de Cebu, but it never crossed my mind that I may be appointed the hermana mayor one day,” Zapanta said.

Zapanta said she wasn’t prepared for the role but felt the call to do it.

“But when you’re called on for such a responsibility, especially in the service of the Sto. Niño, refusing the honor is not an option. Thankfully, by God’s grace we’ve been able to fulfill our duty,” Zapanta said. (READ: IN PHOTOS: 2019 Dinagyang Festival)

But instead of being caught completely off-guard by the honorable appointment, Zapanta took the once-in-a-lifetime responsibility that she considered a part of God’s serendipitous plans for her.

Zapanta has been a loyal devotee of the Child Jesus for nearly 40 years. From 2012 to 2018, she also served as president of the Cofradia del Santo Niño de Cebu – Iloilo Chapter to share in the group’s primary mission in spreading the devotion to the Holy Child in the image of Señor Santo Niño.

Zapanta also worked in various local religious organizations such as the Catholic Women’s League and the Cofradia del Santo Rosario.

Zapanta is the niece of the late Reverend Father Ambrosio Galindez, dubbed as the unimpeachable “Father of the Dinagyang.”

Father Galindez, a highly respected clergyman, first received a replica of the image of the Señor Santo Niño de Cebu in 1968 – a gift from Father Sulpicio Enderes and a delegation of the Cofradia de Cebu.

This image, now enshrined at the San Jose Parish Church across Plaza Libertad, inspired the church and the local government to adopt an “Ati-Atihan” festival in Iloilo City in honor of the Santo Niño.

In 1977, after a decade of commemorating the festivity, the Iloilo City government and San Jose de Placer Parish decided to change the name of the festival in order to distinguish it from Kalibo’s Ati-Atihan.They called it “Dinagyang” as suggested by then broadcaster Pacifico Sudario, paving the way for the modern celebration observed every third Sunday of January today.

To pay tribute to Galindez for his invaluable contributions to the Ilonggo faith and culture, a monument dedicated to the late father was erected in front of the Plaza Libertad, a stone’s throw away from his former parish church. Saved by the Santo Niño

Zapanta said that her journey as a disciple of the Infant Jesus began in the early 1980s, when she regularly attended church services back when her uncle, Father Galindez, was still parish priest of the Parish of San Jose de Placer.

However, in 1986, an unfortunate incident changed her devotion to the Santo Niño.

Zapanta’s then 5-year-old child was rushed to the hospital for experiencing difficulty in breathing. After a series of procedures and tests, her child was diagnosed with advance meningococcemia, a life-threatening rare blood infection.

She recounted that because her child was one of the first reported cases of meningococcemia in Iloilo during the mid-1980s, the doctors warned her that her child may only have 12 hours left to live even under intensive care.

Vigilant and undaunted by the harrowing news, Zapanta decided to reach out to her brothers and sisters at the the Cofradia del Santo Niño for prayers for the health of her child, believing in the power of devotion to deliver her child from harm.

“I believe the Santo Niño has a soft spot for children and the sick,” Zapanta said in Ilonggo.

Miraculously, her child survived the dreadful illness, showing signs of recovery after the first 12 hours in the hospital.

Zapanta also shared that all her 3 children, in their early to late 30s, were also devotees of the Santo Niño and had families of their own.

Since the traumatic incident, she dedicated a large portion of her time serving out of  gratitude for granting her child a new lease on life.

“The divine Santo Niño has brought a lot of blessings into my life over the years. That’s why I have to give back tenfold, as thanksgiving for all the graces I’ve received,” she said.

The couple, represented by their son Bryan Noel during the rite, were officially installed as the hermana y hermano mayor of the Dinagyang during a turnover ceremony at the San Jose de Placer Parish Church on January 15.

As “elders” of the devotees of the Santo Niño, they will help in the activities of the parish  in line with the religious aspect of the 2020 edition of the festival. (READ: Over 130 homegrown films find home in Iloilo’s regional film festival)

Dubbed with the theme, “Perfect Vision: Celebrating the Ilonggo Spirit in Honor of Señor Sto. Niño,” this year’s Iloilo City Dinagyang Festival kicked off on Saturday, January 25, with revelry, festivities, and performances in honor of the image of the Child Jesus.

This year signals a return to old form of sorts for the much anticipated Dinagyang, as its organizers aim to rein back the focus of the celebration to the faith and devotion of the Ilonggos.

The highlight of the Dinagyang Festival is the ati tribes competition on Sunday, January 26, to be joined by 8 school-based tribes set to put on spectacular performances dedicated to the image of the Señor Santo Niño. – Rappler.com