Adamson University under fire for ‘racist’ safety measures vs 2019-nCoV 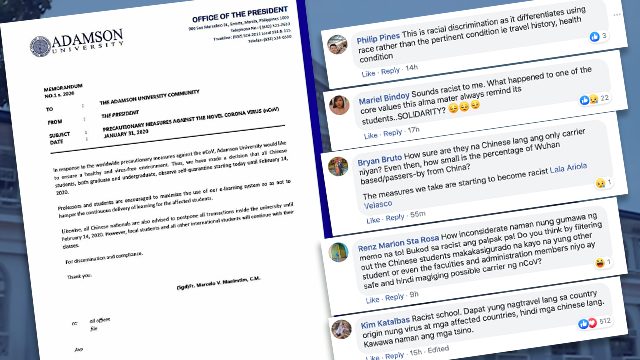 Facebook Twitter Copy URL
Copied
Soon after the memorandum drew flak online, Adamson University apologizes to the public for the 'misimpression it may have created'

This memorandum was released a day after the Department of Health (DOH) confirmed the first case of nCoV in the country – a 38-year-old woman who came from virus epicenter Wuhan and traveled to Cebu and Dumaguete before she was admitted to a government hospital in Manila.

Issued from the Office of the President of Adamson University and posted online by the AdU Student Government, the memorandum stated that this decision was made “to ensure a healthy and virus-free environment.”

“Thus, we have made a decision that all Chinese students, both graduate and undergraduate, observe self-quarantine starting today until February 14, 2020,” the statement reads.

It added that Chinese nationals are advised to postpone all transactions inside the university for the stated period of 2 weeks.

It also urged professors and students to maximize use of the e-learning system so as not to hamper the continuous delivery of learning for the affected students.

Meanwhile, local students and all other students will continue with their classes.

But Filipinos on social media aren’t pleased with the safety precaution ordered by Adamson University to its Chinese students.

Some of them pointed out how this decision from the University stirred racist attacks on Chinese nationals.

Why not include travel history?

Some netizens also questioned the memorandum for singling out Chinese students and not the others with a travel history to the affected countries.

Others defended the university saying that the memorandum was intended for good. Some said that the use of words in the memo should be phrased better.

Soon after the memorandum posted online went on fire, the university apologized to the public. It also made clarifications to its earlier memorandum.

“The Memorandum modifies the previous one released, and we apologize for the misimpression it may have created,” the statement reads.

It clarified that those “who travelled to and from countries with confirmed cases of 2019-nCoV, including China and/or Hongkong, within the last month, or who may have in close contact or had exposure to a potential source of infection during their travel abroad” were ordered to observe self-quarantine and seek medical attention for at least 2 weeks.

It further noted that Chinese students and guests who were not limited by the conditions earlier stated, were not included in those directed to undergo the self-quarantine advisory and would be allowed to enter the campus, as opposed to their earlier statement.

The university also assured its community that it was working its best to ensure the health and safety of everyone.

The 2019-nCoV that originated from Wuhan, China, has so far killed 213 and sickened nearly 10,000 people across the country and worldwide. The World Health Organization already declared an international emergency over the virus.

As of Friday, January 31, the DOH is monitoring 31 patients for the novel coronavirus. – Rappler.com