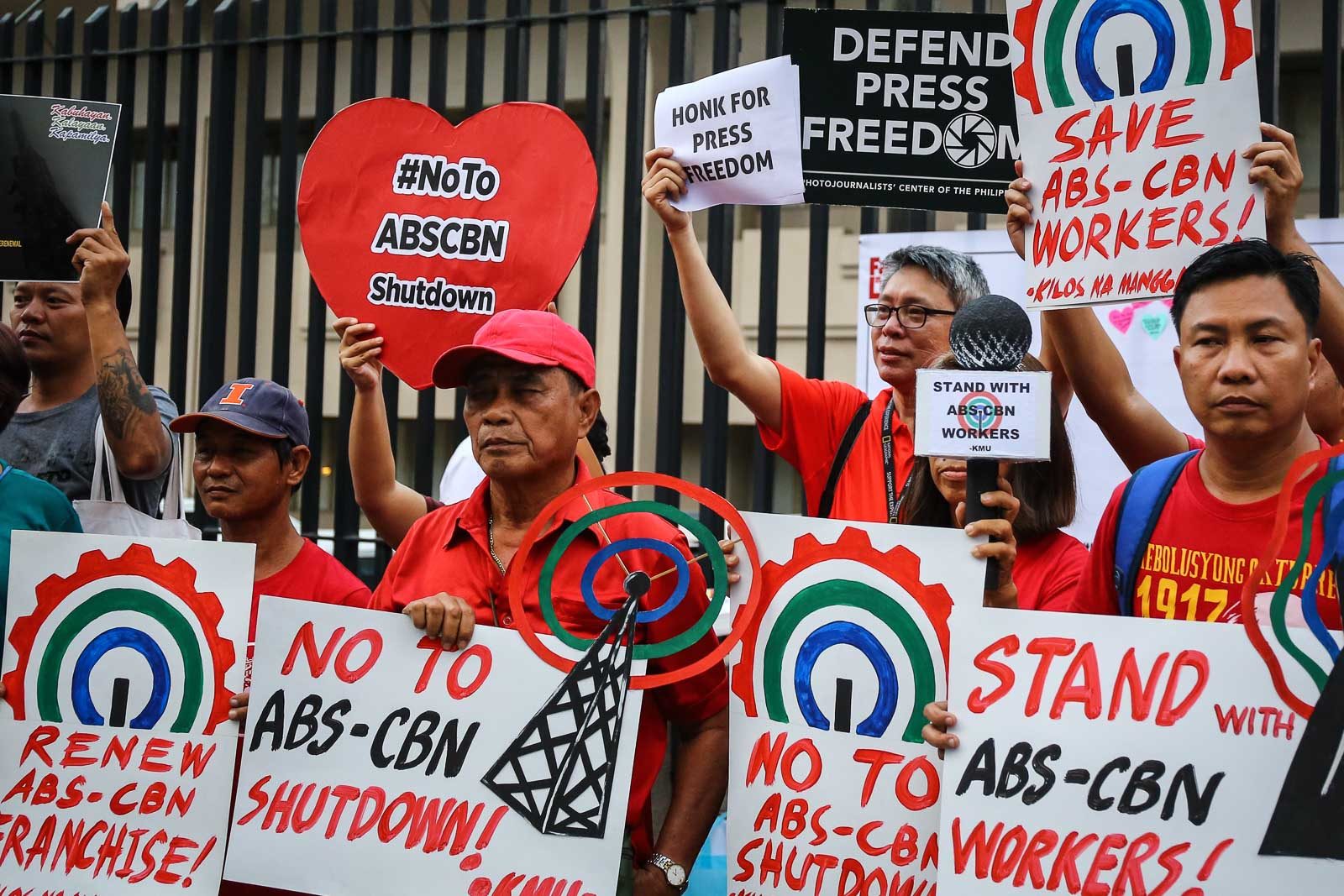 MANILA, Philippines –  It was a different kind of Valentine’s Day for hundreds of journalists, artists, and civic leaders this year, as they wore red and took to the streets to protest government efforts to shut down media giant ABS-CBN.

“We thought that since it’s Valentine’s Day, we’ll make it red instead of black…. We showed love not just for ABS-CBN but our love for freedom of speech, our love for democracy,” Photojournalists’ Center of the Philippines (PCP) Chairman Fernando Sepe Jr said in an interview.

While a large crowd joined the protest, organizers said more people should come out to show their support for press freedom, one of the pillars of democracy.

(There should be more show of support not just for ABS-CBN but for our desire to uphold democracy. Let’s show that we want our right to choose, right to information; that we want to preserve the pillar of democracy and that is the freedom of expression.)

Sepe also said that ABS-CBN’s predicament not only affects its employees and their families but also the general public as the possible closure of one of the biggest network in the Philippines would limit the public’s sources of information.

“It’s very important that we have a choice and if we lose that right to choose, we lose part of our democracy,” he said. Campus journalists from the College Editors’ Guild of the Philippines (CEGP) and Philippine Collegian joined the protest in solidarity with ABS-CBN.

(ABS-CBN’s battle is relevant as one of the national mainstream media [in the country]. If ABS-CBN is shut down, it would have a huge effect; a chilling effect…even on those in the vulnerable sectors such as the community press, alternative press, and especially the campus press.)

ABS-CBN has been on the receiving end of President Rodrigo Duterte’s attacks. Duterte has repeatedly warned the company that its franchise would not be renewed after it expires on March 30. (WATCH: ‘We’re on the side of truth,’ says ABS-CBN exec on franchise renewal)

Congress has the mandate to issue, renew, or cancel broadcasting franchises, but Calida on Monday, February 10, filed a quo warranto petition against the media network before the Supreme Court. The House of Representatives led by Speaker Alan Peter Cayetano, a staunch Duterte ally, has also dragged its feet on the franchise renewal, saying it was not an urgent measure.

Labor group Kilusang Mayo Uno (KMU) joined the rally to show support for the 11,000 ABS-CBN workers who could lose their jobs if the media giant’s franchise is not renewed.

KMU Secretary General Jerome Adonis noted that ABS-CBN has been reporting on the labor sector’s grievances and has amplified its calls to protect workers’ rights.

“Maraming manggagawa ang mawawalan ng trabaho. Ito ay hindi lamang isyu ng labor. Ito rin ay tungkol sa pagkitil sa malayang pamamahayag (There will be a lot of workers who will lose their jobs. This is not just an issue of labor, this is also an issue of curtailing the freedom of expression),” Adonis added.

Members of the Concerned Artists of the Philippines (CAP) showed their support by selling shirts and pins calling for the protection of press freedom.

“We stand for artists’ rights and welfare and anything that threatens the economic livelihood and security of our fellow artists and cultural workers in the industry and media workers. We will give our voices and solidarity for that,” CAP Secretary General Lisa Ito said in an interview.

“We hope to convey the message that the state of repression that happened under the Marcos dictatorship can very well happen now but the people have always chosen to fight and we have won against repression,” she added. NUJP and other groups have called on Congress to grant the franchise renewal of ABS-CBN, saying the attacks against the broadcast giant threatened the people’s right to information.

NUJP Director Sanny Fernandez said in Filipino that the Red Friday protest sent a “good message to the citizenry that the people are not ignoring the issue and are continuing the fight to safeguard the gains we won after Martial Law.”

ABS-CBN employees and their supporters held up signages to passing motorists, urging them to honk in support to press freedom.

The organizers also out up a freedom wall where participants can write their message of solidarity with the network.

“Mas na-e-enganyo kami na lumaban dahil sa suporta ng mga tao (We are encouraged to fight because of the people’s support),” one of the workers said.

A TV production director who had worked for the network for over two decades said public support for ABS-CBN gave him hope amid fears of a shutdown.

In Bacolod City, over 70 members of the media, progressive groups, and representatives from the academe and Catholic church stood up for broadcast giant ABS-CBN at the public plaza on Friday, in solidarity with their colleagues in Quezon City.

The rally, held at the Marker of the Fallen Journalists, was led by officers of the JUNJP and its local chapter.

NUJP President Jose Jaime Espina urged the public to join the call in protecting press freedom because if the government can shut down ABS-CBN, it can shutter other media entities until only the government-run media is left to give information to the people.

“When that happens, the public will have no access to information…. The duty of the media is to serve the people’s right to know,” Espina said.

Marchel Espina, NUJP-Bacolod chapter president, called on the government to stop the coordinated attacks against the media. “Since the start of the administration of Mr Rodrigo Duterte in 2016, the media are the constant subject of his vindictiveness,” she said.

This has created a chilling effect on the media. We don’t want journalists to constantly look behind their backs because of their reportage…. We can’t have a government dictating what we have to report,” she added.

Felix Pasquin, parish priest of Our Lady of Candles Parish, said,  “Press freedom is an important element of democracy and what the government is doing is not reasonable. We are here to show that the Church values press freedom.”

Teacher John Pagunsan and Grade 12 student Joshua Villalobos underscored the role of the media in democracy and their responsibility as watchdogs of the government.

Also joining the rally were Bagong Alyansang Makabayan-Negros and the Baciwa Employees Union, which showed solidarity to the more than 11,000 workers of ABS-CBN, called on the government to renew the franchise of the broadcast network. – With reports from Marchel Espina/Rappler.com