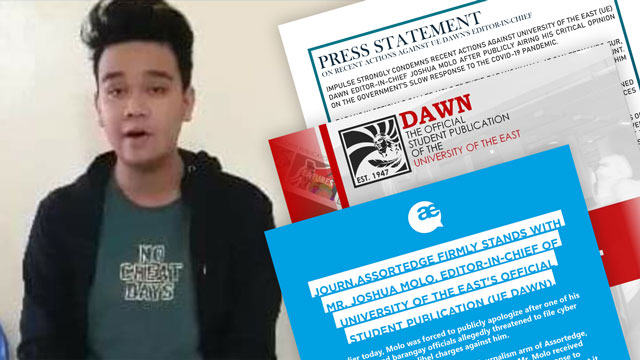 MANILA, Philippines – Several student publications and councils were up in arms after University of the East’s (UE) The Dawn editor-in-chief Joshua Molo was threatened with a cyber libel case and  “forced” to apologize publicly for “misusing” his social media accounts.

Molo had earlier written a Facebook post criticizing the government’s efforts in handling the coronavirus pandemic in the country. This drew the ire of 3 of his former teachers from Cabiao National High School in Cabiao, Nueva Ecjija.

By Sunday, April 5, the teachers filed a complaint against Molo at the barangay level for allegedly posting libelous remarks online. They supposedly demanded that Molo release a public apology and sign a waiver that he won’t talk ill of the government again, or face arrest and detention.

Molo agreed to the terms and posted an apology video, but this was later taken down following a request from one of his former teachers.

Several student publications deplored the incident, reiterating Filipinos’ freedom of speech and expression as enshrined in the 1987 Constitution.

The Dawn sided with their editor in chief, condemning the actions against Molo “in the strongest possible terms.” They added that Filipinos like Molo should not be threatened and intimidated for holding government officials accountable.

“Preventing someone from expressing his or her opinion on matters such as grievances against the government is an act of oppression. We, the members of the UE Dawn, strongly believe that to criticize the government is a right of every Filipino,” they said.

Other student publications and councils across the country also denounced the threat against Molo.

Journ.assortedge, the campus journalism arm of Assortedge, highlighted the need to protect Filipinos’ right to free expression, pointing out how Molo is just one of many citizens who are subjected to intimidation for voicing out their opinion against the government.

“At this time of test, we need to protect Filipino citizens’ right to free expression as well as their participation in the check and balance of the government. As one community, we will never condone criminalizing dissent and freedom of speech,” Journ.assortedge said.

Impulse, the student publication of University of the Philippines Engineering Student Council, echoed Journ.assortedge, saying Molo’s case only reinforces perception that the Duterte administration is out to shut down critics.

“The Duterte administration has continued to tamp down any and all critics of the government throughout the course of the President’s regime. However, Impulse strongly stands with the notion that it is a fundamental right to keenly observe and be critical of the government that serves us as we see fit,” they said.

Abuse of power and the law

Kamalayan said that what happened to Molo should not be tolerated as it “lowers the standard of how we, as a country, respect the rights given to us by our Constitution.”

Polytechnic University of the Philippines (PUP) Campus Journalists, the writing arm of the university’s official publication, described the forced apology as a “blatant attack [on] and proof [of] the continuous gagging of free speech.”

“We condemn this act on lulling out dissent. An authority has no right to intimidate the masses but rather, they must listen to them,” they said.

They also reminded teachers to go beyond the 4 corners of the classroom and allow themselves to learn and be open to new concepts.

Prestoline Suyat, former editor-in-chief of The Dawn and current PUP professor, also urged the teachers affiliated with Molo’s case to be more understanding when students air their opinions online.

“I have watched his public apology and it is my belief that he was forced to do so after he was threatened with cyber libel and was ‘invited’ in their barangay hall…I believe that the teachers involved should have been more understanding and displayed their patience and maturity in dealing with views opposite to their beliefs and stand with issues,” Suyat added.

(Now that we have a health crisis, Filipinos should be more observant and vigilant regarding current issues, especially since Congress granted the President the highly controversial ‘emergency powers.’) – Rappler.com