‘We will not be silenced’: Campus press denounce signing of anti-terror law

Jul 4, 2020 9:54 AM PHT
Rappler.com
Facebook Twitter Copy URL
Copied
Despite the threats that the new law poses to free speech, campus publications pledged they will not cower in fear but continue to stand firm in upholding their rights 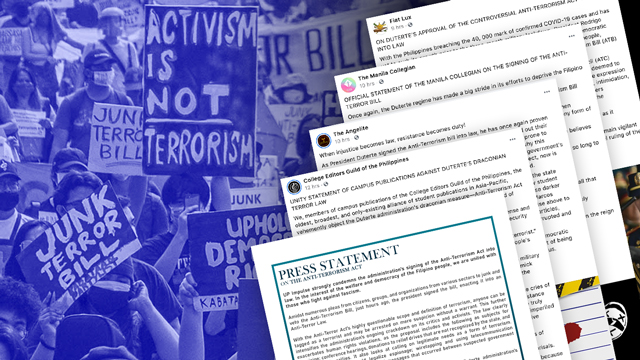 MANILA, Philippines – Campus publications on Friday, July 3, denounced the signing into law of the anti-terrorism bill despite widespread opposition from the public.

In a unity statement of campus publications, the College Editors Guild of the Philippines (CEGP) referred to the law as the administration’s “draconian measure” posing a threat to press freedom and freedom of expression.

“Instead of addressing the people’s demands, Duterte resorted to a 3-month military lockdown where attacks on human rights have been intensified. This fascist gimmick exposed its administration’s eager intention to trample the democratic rights of the Filipino people,” the CEGP said.

It added that the decision of President Rodrigo Duterte proves that the “government prioritized the excessive enabling of stable forces” while the country is imperiled by the coronavirus pandemic.

Duterte signed the bill into law on the same day that the number of confirmed coronavirus cases in the Philippines breached the 40,000-mark.

“The administration has turned a blind eye to what we truly need because of its conceitedness and hunger for validation,” the CEGP said.

Impulse, the student publication of the University of the Philipines (UP) College of Engineering, also condemend the signing of the law, citing how this could prevent Filipinos from calling out the anomalies and corruption in the government.

“The signing of the anti-terrorism bill into law further proves to us that the priorities of this administration are misplaced,” Impulse added in a statement.

It said that the law is a threat to democracy as it further intensifies the administration’s ongoing crackdown on is critics and activists in the midst of the ever-increasing cases of COVID-19 in the country, the loss of livelihood, and the unemployment of millions of Filipinos, among other problems.

“In this time of crisis, we call for concrete, comprehensive, and humane solutions for more important problems, not a draconian measure to stifle dissenters,” the group added.

Not for the people

For the Manila Collegian, this move proved that Duterte is “not a president, but a dictator.”

“With the signing of this bill comes the grave dangers that it contains which, when coupled with a fascist government, becomes a draconic weapon to suppress any form of dissent. Now, in the midst of a global pandemic, his actions make clear the fact that he believes that the use of force is a cure-all for every kind of malady there is,” it added.

The Angelite echoed this, stressing how the law was pushed despite public clamor against the anti-terror bill.

“As President Duterte signed the anti-terrorism bill into law, he has once again proven that he is not for the people and democracy. The Filipino masses have aired out their opposition against its implementation, as it is deemed unconstitutional and prone to abuse,” The Angelite added.

Despite the threats that the new law poses to free speech, campus publications pledged they will not cower in fear but continue to stand firm in upholding their rights.

“The alliance of campus press will never be an instrument of this regime’s attempt to intimidate and curtail the freedom of the press or even ordinary citizens,” CEGP said.

Days before the law takes effect, The Angelite urged campus publications and ordinary citizens to use the time to strengthen alliances, unite, and stand their ground.

“This is only the start of an unwavering vigor to fight for our freedom and democratic rights that were taken away from us on this very day. We are all [under] threat of being labeled as terrorists, but we know very well who is the true terrorist among us,” it said.

Flat Lux, the official student Publication of the National Teachers College, reiterated that  the public should remain vigilant.

“Despite intensified crackdown, we will not cow down. Collectively, we will remain vigilant and continue our resistance to put an end to the state fascism and tyrannical ruling of the Duterte regime,” Flat Lux said.

Meanwhile, Heraldo Filipino, the official student publication of the De La Salle University-Dasmariñas, urged the public, “Keep your eyes open now that they have turned the lights out.”

“We fight for the day our rights are fully guaranteed and not embattled. We will not be silenced,” it said. – Rappler.com