MANILA, Philippines – The numbers are in and they glow in the dark. Online, interest in the global movement went viral, catapulting “Happy Earth Hour” to the top of trending topics on Twitter worldwide as the 60-minute switch-off reached Southeast Asia.

Offline, participation was phenomenal, reaching more than 1 billion people in 6,525 cities and towns across 150 countries and territories. Observing it in the country, Andy Ridley, the co-founder of the biggest environmental gathering in human history, declared that “Earth Hour is more fun in the Philippines.”

But some were not as happy, raising issues that cast a shadow on the impact of turning off lights to turn people on to action. Rappler took note of 3 questions that surfaced in the course of its coverage of Earth Hour 2012: 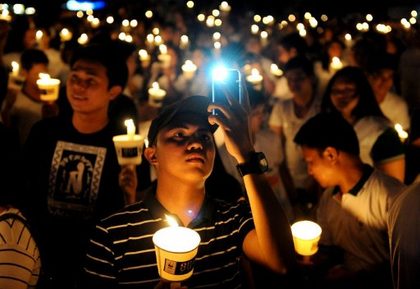 The immediate impact in terms of energy saved seemed to pale in comparison with previous records.

During the 60-minute switch-off on March 31, energy consumption across grids showed a drop of at least 362 MW, lower than last year’s 418 MW, organizers admitted.

The highest registered local energy savings linked to Earth Hour was pegged at 611 MW in 2009, a year after the World Wide Fund for Nature (WWF) Philippines introduced the movement in the country. The conservation group likened it to temporarily shutting down a dozen coal-fired power plants.

WWF-Philippines vice-chair and CEO Jose Ma. Lorenzo Tan explained that the smaller drop was due to power shortages across the Visayas and Mindanao.

“Our focus should not be how much power was saved or who topped Earth Hour or what. What matters is that we try to go beyond the hour,” Tan added.

A record 1,671 cities and municipalities in the Philippines joined the largest global climate action yet, making the country an Earth Hour champion for 4 consecutive years.

But the Department of Energy, a consistent public sector partner of Earth Hour Philippines, is optimistic about the prospects of saving energy using the 60-minute lights-off model.

“Imagine if you do it daily, you significantly shave off power demand,” said Mylene Capongcol, Director of the Electric Power Industry Management Bureau.

Illustrating the impact of the Earth Hour-related drop in energy consumption, Capongcol suggested that it is equivalent to the aggregate electricity demand of nearly 1,800 villages. The power demand of a rural village ranges between 200-400 kilowatts, Capongcol said.

At the international level, questions about the sustainability of the hour-long action in terms of curbing carbon emissions persist.

According to a report in The Telegraph, Earth Hour will not cut carbon emissions but will worsen it, “rendering all good intentions useless at a flick of a switch.”

“Even if power stations are turned off, the upsurge in turning the lights back on one hour later will require power stations that can fire up quickly like oil and coal,” the report says.

Climate change mitigation entails reduction and containment of its main cause, greenhouse gases, also known as carbon footprint. This is based on the Kyoto Protocol, an instrument of an international environmental treaty.

In a Rappler-initiated discussion on the popular microblogging site Twitter, some netizens criticized companies, which they feel are using Earth Hour only for corporate greed and “greenwash.”

“It is ironic that SM is an Earth Hour sponsor when it destroys a forest for profit,” Alipio said.

The SM Baguio branch is being criticized for cutting down trees to build a parking building.

“WWF believes in working from the inside (corporations) rather than demonstrating or lobbying against groups. The organization concentrates its effort on changing perceptions of the people and groups that it works with,” Yan explained.

Lawyer Gia Ibay hailed the annual observance “as a brilliant example of public and private sector collaboration and a true celebration of climate solutions.”

The international environmental organization also listed ways of spotting corporate greenwash such as “ad bluster” which uses targeted advertising to “exaggerate an environmental achievement and divert attention away from environmental problems.”

In the environmental community, it is also used to get groups interested to spend more resources and time on promoting so-called environmentally friendly campaigns than on concrete environmental efforts.

“I tell you now, whatever you choose to do, there is no action too small or insignificant if it comes from a sincere desire to preserve our environment and combat climate change,” Aquino said.

But this is a view that some environmental pundits frown upon. “The solutions to our energy problems don’t start with individuals shutting the lights off at home. They start with public policy,” a science journalist argued.

Instead of singling out the global observance, other local environmental activists chose to challenge the Aquino administration’s environmental agenda.

“Earth hour-like activities help in raising awareness about climate change. Yet to effectively address global warming, there should be a radical shift in policy, particularly on energy production and consumption,” said Clemente Bautista, national coordinator of Kalikasan, an environmental network of people’s organizations.

The Aquino administration is aggressively pursuing additional sources of energy amid the looming energy crisis.

In a radio interview on Wednesday, April 4, Department of Energy Secretary Jose Rene Almendras revealed that it is pushing for the development of an additional 600-MW coal-fired power plant in Luzon, among other sources, to secure energy supply for 2013-2014.

“The Aquino government should drastically reduce its dependence on expensive imported dirty fuels like coal. People should oppose coal powerplant projects and call for a moratorium on new coal power. That is beyond earth hour,” Clemente asserted.

According to Yan, going beyond the hour is precisely the next phase of the campaign which focuses on climate change mitigation and adaptation which involves “energy efficiency and switching to renewable and clean source of energy.”

The co-founder of Earth Hour, in an interview with Rappler, said that the popular 60-minute switch-off is “a reminder to world leaders that there is a consensus, a desire to go toward a sustainable future.” So are the challenges and criticisms posed, which form part of the global debate on what kind of future the international community desires.

They will surely be raised again as the clock ticks closer to Earth Day come April.

But discussions will be even more intense in the run-up to Rio de Janeiro, where the world will converge in June for the United Nations Conference on Sustainable Development “to shape how we can reduce poverty, advance social equity and ensure environmental protection on an ever more crowded planet to get to the future we want.” – Rappler.com