Dec 14, 2011 8:00 AM PHT
Pia Ranada
Facebook Twitter Copy URL
Copied
“In graffiti, there are no restrictions. You can do what you want.”

MANILA, Philippines – He walks into the tiny Persian grill with a searching stare and a skateboard in his hands. Nobody knows what his real name is, not even me at that instant. But his other name is spray-painted, rolled and inked all over Metro Manila and beyond. He goes by the name Dan, but we know him as Nuno.

Nuno on the rooftops in Kamias. Nuno underneath the highway going to Libis. Nuno on an overpass in Katipunan. Nuno everywhere. But for one night, snatched from other nights of dark alleys and neon spray paint, I have him in front of me, like a captured street cat. 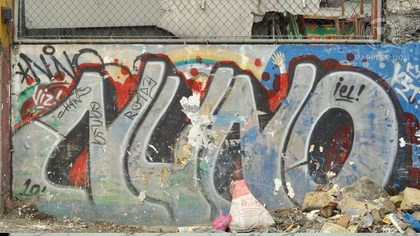 He detests being called a graffiti artist. “It’s gay. I’m a vandal.” As true to himself as the dirty slippers and board shorts he has come in, the guy hates attempts to prettify what it is he does. The fact that it’s illegal is not to be denied. According to him, it’s one of the things that make graffiti worth doing.

Challenging authority seems to come naturally to Dan. Even his hair manages to go in all directions despite being tied into a long, low braid reaching down to his lower back. “I just don’t like being told what to do.”

“In graffiti,” he proclaims, “there are no restrictions. You can do what you want.”

Dan started to “get up,” or create works of graffiti in 2006 after seeing the work of Graver, another graffiti writer, in the tunnel between Katipunan and Libis. Soon after that, he hung out with a friend who was using spray paint for a painting to be exhibited. After learning how to use the medium, Dan began experimenting with the city as his canvas. His first-ever graffiti was done under the bridge in front of the Riverbanks Mall in Marikina.

From then on, he developed and worked on his style, which according to him, focuses mainly on letters and typography instead of characters or cartoons. “Not a lot of people understand letters. They don’t see how much style and artistry goes into them.” With a passion not easily disguised, he goes on to enlighten me on the versatility and beauty of straight letter typography, where focus is put on the bars of letters which can be stretched, squished, bent, curled, zigzagged or splattered into an infinite number of variations.

Nuno’s works, like his fantastical field-dwelling namesake, can be found virtually everywhere. He’s done pieces along Katipunan, everywhere along EDSA, Makati, Tondo and Baguio. He’s even invaded foreign walls in China, Malaysia, Singapore and Macau. But the best spots for him, regardless of city or state, are beautifully finished walls, smooth as a baby’s cheek.

The visibility of a spot also makes it to his criteria. He’s done high-profile surfaces like highways and billboards. Painting the piece is the easy part. The tough part is getting to the spot. He once had to scale a wall to the second level of a building, climb a sign to get to the roof to paint a piece and then scramble back down with the help of his belt for balance.

But he sets limits for where he can paint. Churches and private property are never his targets. He creates his pieces at any time of the day, sometimes alone, sometimes with fellow graffiti writers with names like Darko, Ekis, Bulb, Kid Dragon, Kookoo and RVSH (pronounced as “Arvish”).

The ideal time to do graffiti is at 2 am when most people are asleep. Graffiti art can take as fast as a second to make to as long as three hours. It all depends on the intricacy. A tag, the simplest form of graffiti, which is just the name or signature of the writer, can be a sticker slapped on a wall. Throw-ups, which are bigger and are done in more colors, take a bit longer. The piece, short for “masterpiece,” is far more intricate and entails some sketching beforehand.

A ton of emotions run through you as you paint, Dan enthuses. “You’re scared, nervous, excited and exhilarated. At first, it’s hard. But once you get your groove, you get more confident.” Stealth is something you pick up along the way.

Dan has an escape plan for many of his spots. Otherwise, he just stays alert and anticipates where people can come from, given his location. Thankfully, he’s never been caught. Despite painting at night, he has also never been mugged or accosted. Asked about how he stays safe, he says with a shrug, “Just keep your chin up.”

Graffiti has given him more than praise or, in graffiti-speak, props. It’s defined him. Through street art, he’s gained a world of experience and stories that no one would ever know. He’s met an entire spectrum of people: crazy, lame, wack, you name it. The street art with the borderless canvas has allowed him to paint the city in his colors and get his message and style across as fast as the next LRT station. But with his characteristic love for simplicity, he defines himself in different terms, “I’m just a guy who likes to write his name a lot.”

Dan says his works bear no political message except that of challenging authority. “I’m not much of a political guy. I don’t give a fuck about the government. I just do it to express myself, my style.” He gets a kick out of seeing his work and hearing comments from passers-by. While some appreciate his art, others call it vandalism. But for him, he’s just happy he gets reactions.

At half past 10 in the evening, we part ways. There is always something magical about shaking hands with an artist. You never know what beauty those hands wrought and what more they will create. After a slightly bashful but very polite goodbye, Nuno drops his skateboard and slinks off into the night, as at home in the dark as an alley street cat.

*Nuno requested that his real name be changed in this story.