How Pinoys have become gurus in India 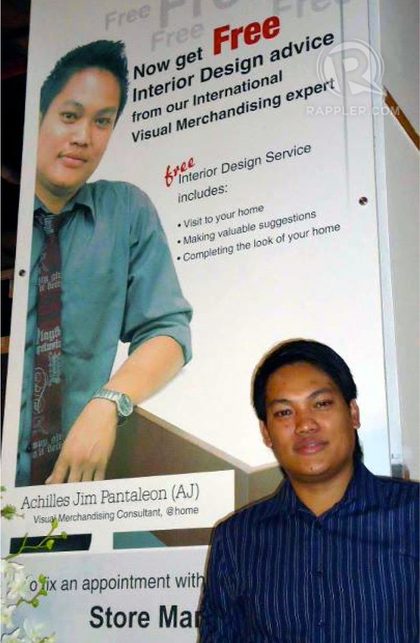 He compares his situation as a foreign worker in Mumbai, to that of a celebrity. He was recruited from Dubai to introduce visual merchandising to a growing local company that sells home furniture and decor.

When he came to India in 2008 their company had only five stores, but after three years with the company, they have opened 10 more stores all over India.

AJ also won awards for the company in competitions abroad. He does not only create and implement the standards for visual merchandising in their stores but is likewise presented by the company to its customers as its resident interior designer. His face is on banners promoting the store’s “free consultation with AJ, our resident designer” and on the annual catalogue that is distributed all over. He has also given interviews to leading Indian newspapers. A celebrity in his own right!

AJ is one among hundreds of Filipino skilled workers who find themselves doing challenging but rewarding jobs in local and foreign companies in Indian cities.

Like the Philippines, India sends workers overseas. However the growing markets for consumer products and services here have created the need for foreign talent to introduce new knowledge, skills and attitudes in the Indian workplace.

India, like the Philippines, has a huge work force but has a shortage of skills in retailing, engineering, manufacturing and services. The Indian government sees both reality and need, and thus grants working visas only to foreign talents with special skills.

Foreign talents are labelled expatriate workers here and can only be allowed to work if the sponsoring company is able to demonstrate a need for foreigners and pay a minimum annual salary of US$20,000.

In a twist of fate, Filipino workers in India, whose labor is valued less in the homeland, now find themselves getting more pay and prestige for the same job. They are mostly consultants, quality checkers, managers and cooks with expatriate benefits like free housing, transportation and paid vacations.

Indian and foreign companies hire them to start businesses, introduce and implement standards at work. Unlike other educated Filipinos who need to change their trade or skill overseas, those in India are able to use their educational qualifications and work experiences from the Philippines or elsewhere.

Although they work in different industries, the stories of these Filipino workers share a common thread: the challenge of working in a different culture and environment. As I listen to them, I sense a mix of frustration and fulfilment. They deal with the unpredictability of everyday life in India and achieve what they have set out to do by understanding the local attitudes and leading by example.

Paz de Vera, one of the pioneering employees of 7/11 in the Philippines, decided to work for an Indian conglomerate, Godfrey Philips India Ltd and introduce the 7/11 concept in New Delhi. She achieved what she set out to do by opening Twenty Four Seven, India’s first modern chain of convenience stores, in 2006.

Paz is happy with her achievement but acknowledges her frustrations in implementing standards among the local workforce. She laments the lack of discipline, order and sense of responsibility. For example, she set up a display system for products, but employees are still unable to follow.

Sometimes she ends up arranging the goods herself. Her patience has not run out yet because another challenge is yet to come: their company has partnered with fuel retailer Indian Oil Company to set up 100 stores all over India.

Noel Arellano also came to India in 2006, and along with a colleague from Brazil, they set up a factory that makes shoe cushions and soles. Noel is a licensed chemical engineer in the Philippines and was directly recruited from Manila by a Spanish company, Zahonero.

As the operations manager and chief technology officer he exercises more control over the local workforce. He introduced self-reliance in the company starting with the practice of tea breaks. Office assistants usually serve tea to Indian workers but according to Noel, “in my company employees go to the pantry and make tea themselves.”

He always comes to work on time and chooses to occupy a desk with the rest of the staff. He enforces a lot of discipline at work but understands the personal circumstances of his employees. His company provides a loan (paid through salary deductions) regardless of the employee’s reason: from a child’s school expenses to wedding or dowry assistance. The company’s security guard calls Noel “a god” because he gave him job security by hiring him from an employment agency. Some Filipino workers are lucky to have local work colleagues who are cooperative and open to learning. Marthy Bermejo, like AJ Pantaleon, works as the head of visual merchandising for Home Center, a rival company, based in Bangalore.

I visited him at their new store in Delhi where he was working round-the-clock for the store’s opening in October 2010. We had lunch and he brought along two colleagues. He wasted no time. While chatting with me and taking portions of buttered chicken and rice, he was sharing tips with the store’s visual merchandiser and a new employee.

Current and former colleagues of Marthy describe him as very generous with his knowledge of the trade. They tell me that Marthy, unlike his senior local colleagues, is down-to-earth and treats them like a sibling. They consider him their mentor and are grateful for training them to do visual merchandising. Marthy boasted to me that two of his employees have become designers in other companies and now get paid more. Indian garments manufacturers have also seen their fortunes change because of a Filipina worker. Alma Fernandez used to head the quality control division of a garments factory in Vietnam before working as a buyer for a US-based fashion house. Her job is to approve the quality of goods before they are shipped overseas.

Her first year in India was tough as she had to stop shipments of defective lots, which meant losses for the local company. The Indian agent who represents the manufacturers complained to Alma’s US employer about her demands, but she stood her ground.

In the face of adversity, Alma made a decision beyond her call of duty to help in the production processes of some factories. She recounted sitting with workers to demonstrate how to sew clothes that meet international standards. The companies that listened to her and implemented her standards have received more orders and made profits. Alma once joked, “My Indian agent now has a new car!”

India is a tough workplace because disciplined and skilled workers are scarce. Filipino workers endure such conditions because of the money they are able to save and send to their kin in the homeland. However, as individuals, they are getting recognized for their labor that is not only helping local companies make a profit, but also showing the locals how to do it in a globalizing market.

Here in India these Filipino workers are gurus with Bollywood star status. —Move.PH