PUERTO PRINCESA CITY, Philippines – Have you heard about the running priest joining the monks? Yes, no more driving the Blessed Mother in a cartwheel outside the Manila Cathedral and stealing the show from the grand wedding of the rich and powerful, or officiating Mass for a bunch of military rebels prior to their mutiny.

Rappler spotted Fr Robert Reyes here while he was gearing up for one last run before slipping out of the limelight: a fund-raiser for slain journalist Dr Gerry Ortega to help in the capture of the suspected mastermind in his killing, fugitive former Gov Joel Reyes.

Early this May, Fr Robert will be joining an undisclosed religious congregation to live an otherwise sedate life away from the evening news.

“Are you quitting on your social advocacies? In other words, have you gone nuts, Father?” we asked. Laughing, he said, “No, I’m pursuing my faith. I’m joining a novitiate. I will be out of action for a considerable length of time but I’ll be back.”

Chatting with Fr Robert in a coffee shop bustling with backpackers in this city, Rappler got a peek into what was going on with arguably the Roman Catholic Church’s most maverick cleric.

“Part of my decision to join a religious order is my frustration with the institutional Church,” the 57-year-old activist priest admitted. He asked that Rappler not disclose the name of the congregation he is joining, as he vowed to embrace the discipline of a secluded spiritual lifestyle that will be demanded of him.

Since running into trouble with his superiors for his unconventional approach to social justice advocacies, Fr Robert has been feeling shackled by the norms and rules of the Roman Catholic institution.

“Cardinal Sin tolerated me at best and even supported me at times. He found it excessive but he did not find anything wrong with it. When he got sick and became weaker, the superiors I had were less sympathetic. Their idea of priesthood was that of the typical parish priest who was expected primarily to do housekeeping, to make sure the church roof was not leaking, and most of all that the collection was coming in,” he said.

After getting dragged into the failed 2003 Oakwood mutiny mounted by then Navy Lt Sg now Senator Antonio Trillanes IV and the Magdalo faction of the military, which got himself detained in Camp Crame for about a week, Fr Robert found himself struggling for a place under the Church hierarchy.

“My bishop in early 2006 gave me an ultimatum that I will be given a parish if I did not talk to media. I said I can keep quite for most of the time, but not forever. Besides, I was already writing a column for a tabloid at that time,” he said.

That year, he went to China and ran the Great Wall. Then he was moved to a diocese in Hong Kong, where he worked as a researcher/lecturer. “I got fired and it was nasty. They just sent me a letter asking me to vacate my room,” he recalled.

Still, he kept coming back to the fray, running in his shorts and sneakers and calling attention to his causes.

He found an ally in Palawan bishop Pedro Arigo and was entertaining thoughts of settling in the province for good when a new-found friend, broadcaster and fellow environmental activist Gerry Ortega, was shot and killed in early 2011.

After Ortega was murdered in January 2011, Fr Robert, along with Bishop Arigo, counseled the victim’s family to help Gerry’s wife Patty and her children cope spiritually with the death of their loved one.

He ran on several occasions to drum up the family’s demand for the case against the former governor to be brought to court. This was after the Department of Justice initially dismissed the Ortega family complaint against Joel Reyes and his alleged cohorts.

On the occasion of Gerry Ortega’s 49th birthday this year and before he packs up for the convent, Fr Robert  said he will do a solo run into the homes and offices of 49 individuals around Puerto Princesa City to collect donations and pledges that will go to a legal fund for the Ortega murder case or as part of the increasing bounty for the arrest of ex-Gov Reyes.

“I will be away for at least a year. I know that Bishop Arigo is amused and concerned about whether I can live that life. But I know I can,” he said in a sermon last Saturday, April 21, in a mass he celebrated with Arigo at the Ortega residence on the occasion of Patty’s birthday.

Fr Robert earned his tag from the mainstream media which dubbed him “the running priest” when he led protest rallies during the 1995 Asia-Pacific Economic Conference meetings in Subic, Olongapo.

At the height of the Estrada presidency, he stole the show from the wedding of the President’s daughter Jackie to Beaver Lopez, showing up with his “Kariton ni Maria” outside the Manila Cathedral where the grand ceremony was taking place.

“I didn’t intend to disrupt the wedding. I was just trying to make a statement that Erap’s ‘jeep’ was all a lie to create an appeal to the masses,” he said. The media went to town with the story.

The Church could not figure out a way to shut him off from political controversies.

An interlude of living in Palawan got him to seriously consider becoming a novice.

“Palawan was my first real immersion in an environment that was truly still pristine, and it reinforced my belief that a priest cannot separate his commitment to God’s kingdom [from his] active involvement in environmental issues,” he said.

He added that the religious congregation he is joining is not conservative. “The founder of this order was deeply immersed in the preservation of nature. I’m sure my novitiate will teach me what I have discovered first as a child, which is the love for nature,” he said. – Rappler.com 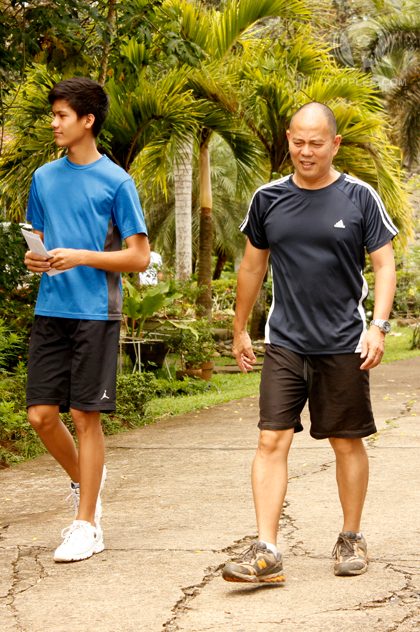