Through our Facebook page, Move.PH joined various organizations in updating Filipino netizens by reporting the typhoon track, actual onslaught, rising deaths and damages, and the subsequent rescue and relief operations.

Abu Al-Rasheed Talpis Tanggol, or Boggs to his friends, was one of those who responded to Move.PH’s call to suggest ways for people to help victims of Sendong.

He posted on Move.PH’s Facebook wall a comprehensive list: where money can be sent, what items are urgently needed, and where doctors can volunteer among others. He posted the same list in other networks, too.

Boggs, 23, is a sophomore law student at the University of the Philippines (UP). His parents grew up in Iligan City. He was in Manila when Sendong hit, but he flew home to help. He is an active youth organizer in Manila, but said it’s his first time doing it for Mindanao.

“It was effective. In just a short time, I was able to gather volunteers; get psychologists from Manila to come here for psycho-social support and training; gather some donations from here and abroad; and get the commitment of doctors, nurses, and med students from Cebu to help at ECs,” Tanggol said.

“When it  comes to disasters like this, there are a lot of people who are very much willing to help. They just don’t know how and where. We need to consolidate information,” he added.

Boggs originally tagged his contacts from Mindanao, but he said it was when he posted the list on media platforms like Move.PH that he got overwhelming responses.

“That’s where most of the shares came from. When I started posting on Move.PH and other groups. When I woke up, there were so many responses,” he said.

Among the volunteers are his high school classmates, many of whom he has lost contact with. “Sa Facebook na lang talaga,” he said. (It’s really via Facebook.) 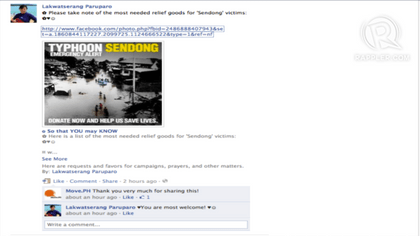 “Lakwatserang Paruparo” shared on the Move wall a list of what she identified as “the most needed relief goods” for victims of Sendong. This was likewise shared with her by Bing Bernardo-Gaw.

Facebook, during times of disaster, can be a platform for soliciting very specific and targeted help. – Rappler.com

(Note: Move.PH is the citizen journalism arm of Rappler.com)