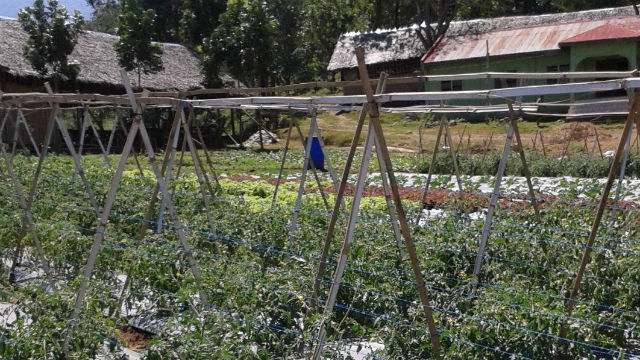 MANILA, Philippines – A farmer and carpenter, Mang Oscar (not his real name) left his home in Toboso to join the New People’s Army (NPA) after suffering abuse at the hands of a soldier. For the next 4 years, he was involved in gun fights with the armed forces, educating the masses and collecting revolutionary taxes from private businesses in the province (primarily sugarcane companies).

He lived on the run with his family and rebel comrades, as they sought to avoid military detection. They survived on monthly rations of rice and coffee. Seeing his children without proper education and realizing that there was no future for them within the movement, they resolved to come down and surrender.

For most people who have gone down this path, the shift to mainstream society is not easy. They face constant discomfort that rebels they once fought with are now out to kill them for turning against the cause. In particular, those who have held important positions in their unit face a graver threat because of their knowledge of operations and unit structure of the movement. Furthermore, there’s a strong stigma attached. Thus it’s crucial to have assistance coming from different sectors of society to support their reintegration.

(READ: ‘We need the government to protect the poor, not the rich’)

It is in this context that the Negros First-Army Wellness Farm was established in 2012. It is designed to ensure food security, generate basic income and sustainability for identified beneficiaries, especially former rebels, threatened witnesses, Citizen Armed Force Geographic Unit (CAFGU) members, army personnel, and displaced civilians in the hinterlands.

The 2.5-hectare farm, nestled within the army camp of the 303rd Infantry Brigade (IB) in Murcia, produces organic vegetables in addition to raising poultry and livestock. Seeing the potential of organic farming, the 303rd IB, under the command of Colonel Jon Aying, has adopted it as a tool for socio-economic enhancement of individuals and communities highly involved, affected, and vulnerable to armed conflict. It is one of various non-traditional roles of the military that combines development with security to build a more sustainable peace.

Aying is one of the principal proponents of Negros Occidental’s Five-Year Peace and Development Plan, which was embraced by the provincial government and eventually formed the basis for the creation of the Provincial Peace Integration and Development Unit (Pro-PIDU) by virtue of Governor Alfredo Marañon Jr’s Executive Order 12-016 signed on July 17, 2012.

The Pro-PIDU undertakes plans, programs and activities to help address issues facing the marginalized communities in the province. One of these projects is the organic wellness farm, for which the provincial government has allotted P1.5 million for the preparation of land and development of facilities. So far, the farm has generated an income of P300,000 in gross sales and has catered to the socio-economic needs of around 34 family members of former rebels . Additional plans for satellite organic farms are being drawn up to establish sites in other parts of the province, particularly the first, fifth and sixth districts. It is the goal of the Pro-PIDU advocates to see the institutionalization of the program within the province.

In response to IPSP

These efforts are in response to the Internal Peace Security Plan (IPSP) Bayanihan launched in January 2011. The IPSP highlights two strategic approaches: The Whole-of-Nation Approach and a People-Centered or Human Security Approach. This new framework mandates the Armed Forces of the Philippines (AFP) to take part in a multi-sectoral engagement in “winning the peace.”

According to the military, Negros Occidental remains one of the hotbeds of the communist insurgency in the country. Based on the latest National Economic and Development Authority (Neda) survey, the province has one of the lowest average family incomes in the rural areas despite enjoying high economic shares.

“Some students in the rural areas are pulled out from school to work in sugar plantations which results in low levels of literacy among children. This setback has brought about inter-generational poverty and illiteracy, where some families joining the armed struggle,” Aying explained.

Moreover, in February 2014, Governor Marañon was conferred the Bayanihan Award by the AFP during a forum on peace, integration and development for his role in the implementation of the IPSP.

“We are trying to create the mechanism to be effective in providing the link from the decision-makers to the grassroots who really need these services,” Aying shared.

Other project components of the Pro-PIDU include the humanitarian caravan, emergency relief and assistance, and the Guns for Peace program. Since 2012, at least 80 rebel returnees have received cash in exchange for firearms and livelihood assistance from the government.

A provincial government employee said that those who want to surrender and integrate themselves back into the civilian community must first agree to dispose of their firearms. She explained that “aside from the fiscal assistance, they will now have more family time with their children. How could they fight for an ideology of building a strong nation when they cannot even build their own family?”

Mang Oscar and his family are now under the protection of the army. Following his transfer to the custody of the 303rd IB from an adjacent unit, the wellness farm was just being established.

While his kids attend the nearby high school, he helps out in the farm and earns P200/day. He explained that it is challenging to make ends meet with that allowance, but he is happy to see his family intact and his children pursuing their education.

Intending to start his own organic farm when they go back to their old home, Mang Oscar strives to learn as much as he can about livestock and organic farming as he is keen to apply that knowledge and new skills on his own soil. – Rappler.com

Ava Patricia C. Avila is a doctoral student in defense management at Cranfield University. She did part of her fieldwork in Negros Occidental.