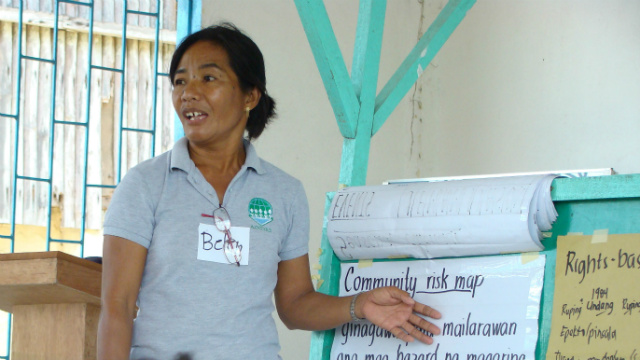 MANILA, Philippines – If asked if she thought of herself as a humanitarian hero, the shy and unassuming woman would probably tell you, “Di naman!” (Not really!)

But Nay Belen is really a humanitarian worker. She is a product of CARE Nederland’s Assistance and Cooperation for Community Resilience and Development (ACCORD) program which helps build the capacity of the most vulnerable so that they themselves can work towards strengthening their resilience.

From beneficiary to community volunteer to full-time staff, Nay Belen is an archetype of someone empowered to serve others.

Nay Belen is a native of Calabanga, Camarines Sur. She has been married to her husband Edwin since 1982 and they have 8 children. She helps her husband, a fisherman, by making pawid (nipa shingle). The couple make up to P150.00 (US$3.50) per day.

It was a happy but difficult life. They worked themselves to the bone just to make ends meet. In 2006, Typhoon Reming (international name: Durian), one of the strongest typhoons the Philippines, totally damaged their house.

She was chosen as a beneficiary of three successive projects ACCORD implemented in the aftermath of Typhoon Reming. She considers herself fortunate for being chosen.

But it was ACCORD’s fortune that Nay Belen was willing to be more.

She always had a thirst for knowledge. Luckily, the capacity building activities conducted by ACCORD in their barangay seemed to have quenched that.

Not satisfied with merely attending trainings, Nay Belen volunteered as a community facilitator. She helped the staff not only in preparing visual aids and other workshop materials but more importantly in encouraging her neighbors and friends to attend. 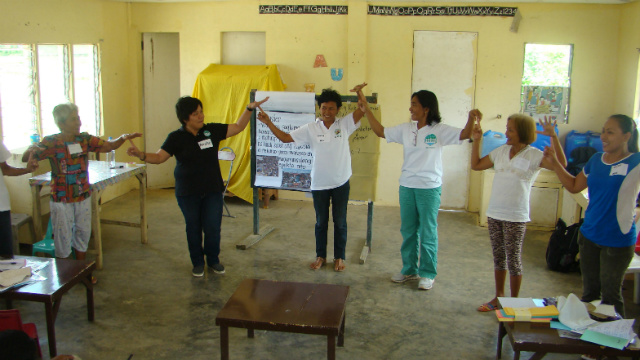 Seeing that Nay Belen had potential, the staff asked her to undergo further training as a community facilitator – and that training was in front of teachers.

“I prepared well for my session on evacuation center management, but I still buckled down in front of them,” she recalled.

It took an ACCORD staff pulling her into a room and telling her that she already knew these things which the teachers still have to learn to steel her nerves. She came back, continued, and aced her first workshop session.

In 2011, the ACCORD projects in the area ended after 5 years.

As one of the trained community facilitators, Nay Belen was absorbed into the structure of the municipality. The new mayor of Calabanga had committed to continue the disaster risk reduction initiatives started by ACCORD. Nay Belen served as a community organizer in the municipal solid waste management program.

A year later, the organization contacted her and offered her a job as full-time staff.

They told her that they wanted her because she had lots of initiative and familiarity with the organization’s model. With the blessing of her family, she accepted and left the province of Camarines Sur for the first time in her life.

She was first assigned to Isabela province for the Scale Up Build Up Project (SUBU), which was then followed by an emergency response project in Malinao, Aklan for those affected by Typhoon Yolanda.

“I was happy because not everyone is given the chance to serve in other areas, but it was also hard to be away from your family,” she explained.

Nay Belen soldiered on though, and she found capacities she never thought she had. She experienced coordination work.

“At first, I was intimidated at having to talk to the mayor and the municipal disaster risk reduction and management officer,” she recalled. “But they were very kind and accommodating, so those fears went away.”

She was also assigned to do validation of beneficiaries’ selection and monitoring of shelter repairs.

“I enjoyed it, because I was able to go house to house and meet people like me. To be able to help them was a blessing,” she said.

Nay Belen did a lot of walking under the heat of the sun, riding the habal-habal (motorcycle with an extended seat for an extra passenger) into mountainous areas, and crossing rivers. Volunteers in the area who went with her would exclaim, “Ang bilis mo Nay!” (You’re too fast!)

Nay Belen gives a lot of credit for what she has achieved to the rights-based approach taught by ACCORD in its trainings. She experienced it first-hand in how the staff treated her despite not being able to graduate college.

“They did not treat me differently and gave me lots of encouragement and always answered my questions when I was not sure of what I was doing,” she shared. “That motivated me to always give my best.”

At 52 years old, Nay Belen is an example that age doesn’t matter. She did not finish high school but she managed to pass the Alternative Learning System (ALS) test last year, which earns her the equivalent of a high school diploma. She has also been trying to learn working with computers, though she admits that her speed in typing leaves much to be desired.

Due to family-related concerns, Nay Belen had to leave the organization. But she says that she is willing to return once asked.

“ACCORD helped mold me,” she said. “I want to show them that despite my age, my learnings can still be put to good use in the service of others.” -Rappler.com

Darwin is the Project Assistant for Media and Communications at ACCORD. A graduate of BA Political Science from UP Diliman, he loves to watch TV shows and play history-based war games on his laptop in his spare time.

ACCORD is an implementing partner of CARE. Its interventions in Malinao, Aklan have been made possible through the support of the United Kingdom’s Disasters Emergency Committee (DEC).

The SUBU Project ended just last November 2013. Implemented by six non-governmental organizations, including CARE Nederland through ACCORD, the project was funded through the generosity of the European Commission – Humanitarian Aid and Civil Protection department (ECHO).

Visit their website for more information on how you can help make a difference by building resilient communities.