To shoot or not to shoot

Jan 4, 2012 7:23 AM PHT
John Javellana
Facebook Twitter Copy URL
Copied
Photographers often take from every subject and their limits are their own

I took up a lot of film in college, watched a lot of movies, and saw the same shot again and again. I saw it again, in the Orchids set. The man, standing, looking around him with a dazed sort of disbelief, behind him and before him the carnage of what used to be his life. Only there was no actor. There were no retakes. There was nobody directing the scene. No camera crew, no props, no lighting, no script, just a frame to be composed, metered, focused and shot.

This is Orchids Subdivision, and the villain is a storm named Sendong that turned Cagayan de Oro and Iligan into a de facto movie set for a film with an end-of-days theme.

The establishing shot: leveled houses, swathes of sand, broken posts. Then the details: grimy toys and washed-up picture albums in the wet mud. Even the very footprints in the mud that buried the community were cinematic, a photographer could be blindfolded and still produce perfect frames.

House tiles, toilets standing in houses without walls, the remnants of hovel and mosque and mansion. Nothing was spared. And logs, everywhere, stacked in churches and spearing into homes. 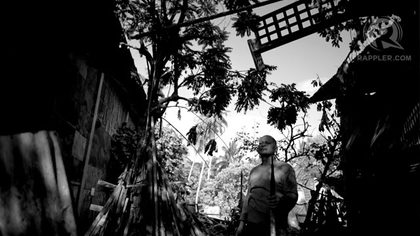 It was a photographer’s field day, and I was on a high. Since 2006, I had been covering typhoons, Milenyo, Ondoy, Pepeng, Falcon, now Sendong. I can’t remember when they happened or where, for me it was jump in and jump out, and make sure to stay alive.

Sendong was the same. The rubbish and the dead smelled the same, pungent, seeping through the mask I still had on. In Orchids I walked past the houses to the sandbars, where the tangle of debris was being washed out to sea. In the tangle was a face, or what used to be a face. The photographer in me was thrilled. This was the shot, the necessary shot for every photographer covering a disaster.

The rescue volunteers began digging out the body, and then there were three. Two children, one inside each of the dead man’s arms. It was an important photo. I knew that instantly. It was a morbid shot, but there were ways to shoot it and get away with it. And then I froze.

Photographers are trained to see and to shoot. I saw, but I didn’t shoot. I never even bothered to put up my cameras. I’m not the most religious of people, but I I found myself saying a prayer for what was in front of me instead.

It was the perfect day for any photographer, but a bad one for his soul. I know other photographers would have taken that shot, and well, would have changed the world by the taking, but I’m not that photographer. Maybe that makes me a bad one, or worse, a mediocre one, but I like to think I just did what I had to do and walked away with myself intact.

I’ve never denied photojournalism exploits, no matter how honorable or ethical we try to be or claim we try to be. We take from every subject and our limits are our own. The 11 days I covered Sendong was the first time I saw and acknowledged mine. – Rappler.com