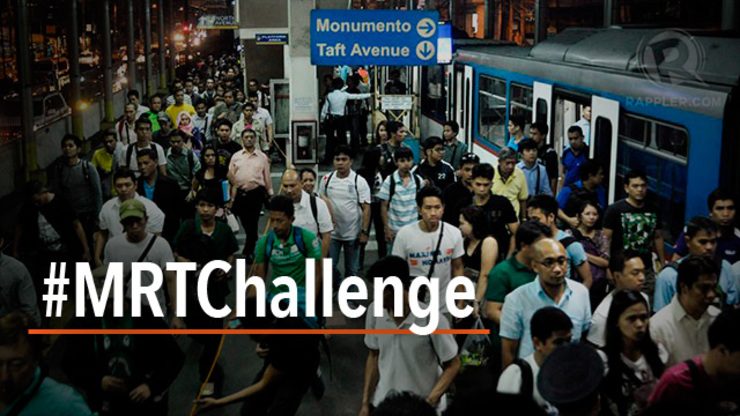 Facebook Twitter Copy URL
Copied
Which government official do you want to see take the #MRTChallenge?
MANILA, Philippines – Imagine senators and other high-ranking government officials going through the complete MRT3 experience – from falling in line for hours, to traveling on congested coaches, and taking trips prone to interruptions and technical glitches.
This is the netizens’ #MRTChallenge to government officials.
#MRTChallenge
Coming in the heels of a series of mishaps involving the MRT3, Transportation Secretary Joseph Emilio “Jun” Abaya and Senator Grace Poe took the mass transit – one day after the other – to get a first-hand experience of what ordinary commuters go through on a daily basis.
The MRT trips of Abaya and Poe prompted netizens to probe the idea of challenging other government officials to follow suit.  This gave birth to the #MRTChallenge.
Netizens named their nominees. And they don’t want the officials to simply take the train.
They require the officials to join the MRT3 morning rush hour crowd, without any media or security entourage.
Favorite nominees of netizens include President Benigno Aquino III, Vice President Jejomar Binay, Senate Majority Leader Alan Peter Cayetano, and Senator Miriam Santiago.
Who do you nominate for the #MRTChallenge?
[View the story “#MRTChallenge” on Storify]
Which politicians do you want to see take the MRT? What concrete action would you like them to do after taking the train? Share your thoughts in the comments section below! – Rappler.com