Preserving the tradition of heirloom rice in the Cordilleras MANILA, Philippines – The beautiful rice terraces in the Cordillera Administrative Region (CAR) aren’t only aesthetically pleasing; the famous tourist spot is home to one of the region’s most treasured products.

A UNESCO World Heritage Site since 1995, the terraces were intricately carved by the early settlers of the region. The more than 2,000-year-old site also boasts of a comprehensive irrigation system that relies on water from mountain forests.

The heirloom rice varieties, the product of the terraces, are considered to be an important fixture in the lives of farmers in several areas in CAR.

Staying true to the name, these varieties of rice are passed from generation to generation and are grown by families in their small ancestral lands.

More often than not, the process of farming is stripped of the modern mechanisms huge farms employ nowadays – making it truly traditional.

Heirloom rice varieties go beyond the usual type of rice we see on our dinner tables. They represent the culture of the Cordilleras and have become the lifeblood of their farming tradition.

According to the International Rice Research Institute (IRRI), heirloom rice varieties are more flavorful, aromatic, and have exceptional nutritional value when cooked.

Even without hints of food coloring or any additional flavoring, the cooked rice leaves a fine aftertaste. One can even eat the rice without any viand.

In addition, they also have characteristics that help farmers make better income from their crops. These rice varieties are also resilient as they show high tolerance to stresses in the environment and also boast of resistance to diseases, making them perfect for a country suffering from climate change. (READ: Empowering farmers against climate change)

There is an existing high demand for heirloom rice in the local and international markets. In 2012, the total shipment to the United States (US) was valued at P1.3 million (almost $29,000)*. (READ: Cordillera rice for sale in California soon) Since 2005, the Rice Terraces Farmers’ Cooperative (RTFC) has exported more than 90 metric tons of heirloom varieties.

One of the most famous terraces alone, the Banaue Rice Terraces, shipped 15 metric tons of organic heirloom rice in September 2013. Among these were the Mina-angan, Hungduan, and Ulikan varieties.

Something so laden with opportunities is not without any hindrances. Just like any other industry, the ones bearing the problem are the producers.

One of the problems seen in the production of heirloom rice is the unequal distribution of profit. Farmers get the raw part of the deal despite them having the biggest contribution to the process.

The IRRI notes that a kilo of heirloom rice, depending on the variety, is sold by farmers for almost P60 ($1.34) a kilo.

Heirloom rice, especially those planted in small farms, do not yield as much as the common rice varieties found in Central Luzon. 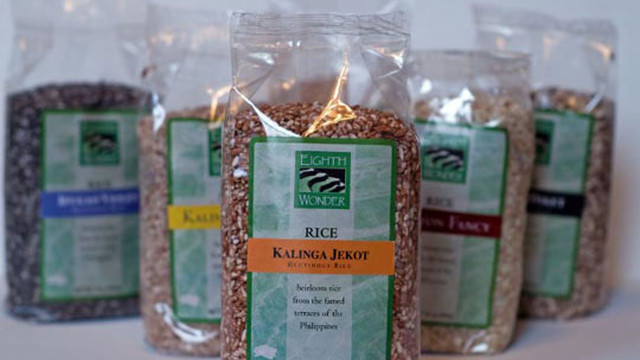 This is one of the reasons why younger members of farming families resort to other livelihoods. Agriculture has become one of the poorest sectors in the Philippines despite products increasing in market value. Poverty incidence among farmers have remained at 38% since 2008. (READ: Save the Ifugao rice terraces? Scholarships are key)

The lack of manpower and resources results in the gradual disappearance of certain varieties and the risking of its huge potential.

The Heirloom Rice Project seeks to further improve and enrich the traditional rice by making sure that those in underprivileged communities are given enough access to information that can empower their farming.

Heirloom rice farmer and RTFC member Jimmy Lingayo is grateful for the experience and knowledge he acquired from the efforts to ensure their livelihood.

“Sana mas matuunan ang heirloom rice kasi malaking bagay ito sa amin,” he said. (I hope that they will give more attention to heirloom rice since it will mean a lot to us, upland farmers.)

His upland farm in the mountainous region of the Cordilleras has been receiving assistance from the institute since the project started in March 2014.

Organized by the IRRI in partnership with the Food Staples Sufficiency Program (FSSP) of the Department of Agriculture (DA), the collaboration aims to preserve the art of heirloom rice farming especially in areas where the process is close to extinction. Samples of heirloom rice varieties from all over the country are transported to the international institute’s main campus in Laguna where they are stored, studied, and eventually planted to produce more of its kind.

Farmers then can request for free enough samples to jumpstart their farming, provided that the heirloom rice variety is native to their area.

In addition, IRRI encourages them to keep even a small part of their harvest that they can use for the next farming season or even share with other farmers. This ensures that the heirloom rice variety will spread to the entire region.

Hitting two birds with one stone

According to National Scientist and Professor Emeritus of the University of the Philippines Los Baños Gelia T. Castillo, introducing the concept of planting heirloom rice for consumption and for keeping guarantees they will survive extinction. This will also make sure the rice will be enjoyed not just by Filipinos, but the world as well.

“Even the Cordilleras can continue to be proud to keep eating and savoring their own heirloom rice and, most of all, about helping their own cultural heritage survive,” she wrote.

Passing on the heirloom rice tradition to the far communities in the Philippines not only preserves their culture, but also contributes to their own livelihoods. – Rappler.com