What is your ‘It’s more fun in the Philippines’ meme?

Jan 6, 2012 12:54 PM PHT
Facebook Twitter Copy URL
Copied
Take the new tourism campaign logo out for a ride and give it your own spin 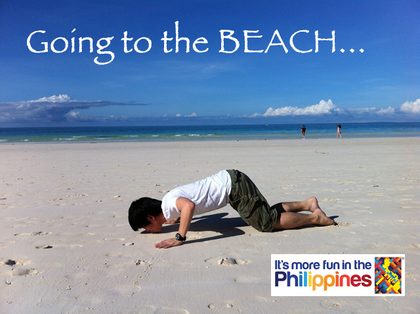 MANILA, Philippines – I’ve been to many beaches around the world. Bali in Indonesia, Guam, Penang in Malaysia, San Diego’s La Jolla beach, and the famed California Coast up north near Monterey and Carmel to name a few. All were awesome.

But for some reason it wasn’t till last October, shortly after my 31st birthday that I visited the island paradise of Boracay. And can I just say… going to the beach, it’s more fun in the Philippines!

I spent only two nights on the island, and in between enjoying the sun, sand and water, sampling the food, and indulging in a luxurious spa treatment, I didn’t have plenty of time to enjoy what else the rest of the island had to offer. I went home thinking to myself, “why did it take me so long to get here.”

That’s the problem right there. It’s embarrassing but I’m just going to come out and say it, I as a Filipino wasn’t sold on the concept of Boracay being one of the best beaches in the world. And boy was I in for a surprise during my first and long overdue visit. Boracay as a beach destination has plenty to offer, and so does the rest of the Philippines. And as equally important is giving foreigners a reason to come and visit – I think we need to work on convincing ourselves first that the Philippines is worth trumpeting to the world.

So what’s next? My proposition is that we start a meme, or an idea that is propagated through the web.

Take the new tourism campaign logo out for a ride and give it your own spin. The Department of Tourism has some ideas on its newly launched website, itsmorefuninthephilippines.com and we’ve also done a few to give you an idea and get you started. Your turn. Show us what you’ve got. Send your submissions to move.ph@rappler.com and we’ll post our favorites in a separate article. – Rappler.com