The invisible kids of the streets MANILA, Philippines — Their parents threw them out, just like trash.

Some were abandoned as teens; others from the very beginning, still toothless and small.

They have no one to rely on but themselves; sometimes fellow children. It’s kids raising kids, with the streets as their witness.

On most days, they are invisible; sometimes they are reported to the authorities. They end up in facilities managed by local governments or by non-governmental organizations (NGO). Their fate, however, remains uncertain depending on how facilities are run. Sometimes life inside such facilities can be just as tough.

Some children can protect themselves, others cannot.  Street children with disabilities. Ever thought of them?

In the Philippines, for every 5 persons with disability (PWD), one is a child under 15 years old. (FAST FACTS: Rights of PWDs)

In 1992, the Philippines enacted the Magna Carta for Disabled Persons, a landmark legislation. It supports persons with “physical or mental impairments.” Advocates, however, observed that existing programs mostly address the needs of persons with physical disabilities, forgetting those with mental disabilities.

“Our laws cover all types of disabilities, the problem is poor services and implementation,” said Carmen Reyes-Zubiaga, director of the National Council for Disability Affairs (NCDA), a government agency monitoring the implementation of laws on PWDs.

Cellona works at Virlanie’s Aime Home, a shelter for abandoned children with autism, Down syndrome, hearing loss, speech impairments, and developmental disabilities. Aime is the French word for love. 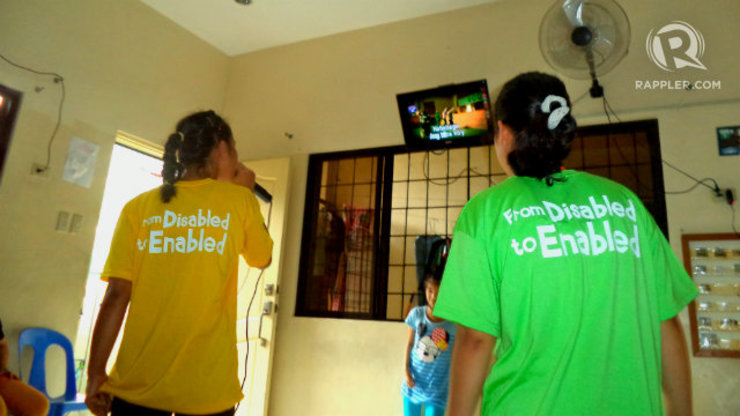 Unlike other shelters, Virlanie provides a permanent home.

“We only discharge them if they’re ready for independent living or if unified with capable families,” said Cellona. Only 8 children have been reunified since 2006; these kids were not abandoned but were only lost.

As of present, no one has been discharged for independent living. “They lack job opportunities” argued Cellona. “Because of stigma.”

Although many can become functional workers, they have a hard time getting hired. “They can do routine work like office or restaurant assistance, cleaning, domestic tasks. I hope there’ll be a big corporation that will hire these children when they grow up.”

The private sector is encouraged by law to support PWDs by providing job opportunities. In fact, the Magna Carta offers incentives to employers hiring PWDs. It also requires the government to provide financial assistance to “economically marginalized but deserving disabled students” pursuing college or vocational courses.

Zubiaga advised companies to develop programs where persons with mental disabilities can work according to their own capacities.

Virlanie also coordinates with the Department of Social Welfare and Development (DSWD) to facilitate the children’s adoption. “But nobody wants to adopt them,” Cellona said. “Who else will take care of them?”

Street children may be reported to barangay officials or the police who will then refer the case to DSWD. Abuse can begin at home.

“Parents who abandon their children are not in their right minds,” Zubiaga said.

UNICEF found that children with disabilities are at a higher risk of abuse because of “stigma, negative traditional beliefs and ignorance.” Children’s limited opportunities for education, employment, and community participation lead to more hardships.

“Disabled children are also often targeted by abusers, who see them as easy victims,” UNICEF added.

From 1987 to 2006, 64% of complaints filed by PWDs involved sexual abuse, the Commission on Human Rights reported. Majority had mental disabilities, and most of them were female.

But out in the streets, a lot of things can go unreported. (READ: Remembering the rape of Rosario Baluyot)

In 2007, a 16-year-old street child with mental disability was gang raped in Tondo. The perpetrators were never caught. A month later, the girl was referred to Virlanie. Years later, she is still staying at Aime where she is being trained to become a caregiver.

In another case, a boy left for Manila at 14 to find work, but ended up in RAC at 16, and in Aime at 17. He was diagnosed with schizophrenia. The boy was reunited with his family at 18 when his parents read a newspaper ad Cellona wrote.

The family was in disbelief when they learned of the boy’s condition, “He was ‘normal’ before,” they said. Cellona then counselled the family on mental health, enabling them to support their son.

Not all street children, however, are able to stay in shelters like Aime. Many of them remain in the streets, begging. UNICEF reported that globally, the most common form of employment among disabled children is begging. They are usually forced by their own families or by syndicates.

Meanwhile, some children with disabilities are pushed into prostitution. UNICEF found that these children are more “sought out” under the assumption that they are more “compliant.”

The government is mandated by law to ensure the “rehabilitation, self-development and self-reliance” of PWDs. Since services are devolved in the Philippines, such efforts depend on local government units (LGU).

“Each LGU should have a program for street families. DSWD regional offices then provide technical assistance and funding,” said Zubiaga.

She admitted that not all LGUs are able to respond to the needs of children with disabilities, saying, “Their social welfare and municipal health offices should work together.”

The DSWD has no specific programs for street kids with mental disabilities, according to Camia Ferrer of the DSWD Protective Services Bureau. The Department, however, implements other services such as the “Tuloy Aral Walang Sagabal” program which trains daycare centers in handling children with disabilities; detection and education programs for families; and job search assistance.

The Philippines has impressive laws on PWDs, advocates say. The challenge lies in translating them into action.

Roughly 3% of the country’s youth population consisted of street children as of 2001, the latest data available from the Council for the Welfare of Children showed, or about 246,000 street kids.

How many had mental disabilities? What happened to them over the years? Some of them made it out of the streets, others did not. Perhaps they had children of their own,  only to replace their slots in the streets. – Rappler.com

To sponsor a child, volunteer, or donate to Virlanie Foundation’s Aime Home, you may contact them at +632-896-2289 or info@virlanie.org. You may also donate online. For more information on the rights of persons with disabilities, you may get in touch with NCDA at +632-951-6033 or council@ncda.gov.ph.

You can also send your stories and ideas to move.ph@rappler.com.