[Dash of SAS] WWW: Women on the Web are not Welcome

Jan 29, 2015 2:43 PM PHT
Ana P. Santos
Facebook Twitter Copy URL
Copied
Authorities either underestimate the threat that technology-related violence presents or do not have a full understanding of how the pervasiveness of such violence causes psychological and emotional distress

CEBU CITY, Philippines – Women are not welcome on the Internet.

Amanda Hess, an American journalist made this statement in this article of the same title.

Hess had many reasons for her claim.

According to Hess, as someone who writes about sex and gender issues, hate mail is par for the course. In the beginning, she learned to ignore it. But when Twitter came into the picture, these threats acquired an audience and could no longer be ignored. Hess likened the experience to receiving hate mail and having every single one of her followers read it.

One anonymous Twitter account, in particular, seemed to be set up just to torment her with constant threats to rape and kill her.

The Internet is a hostile environment for women

There are a number of studies that corroborate Hess’s claim.

From the teen years, teenage girls are more likely to be cyberbullied compared to boys. In a research done on on-line behavior, female or feminine usernames received an average of 100 sexually explicit or threatening messages a day. A male or masculine name received about 4.

According to Take back the Tech, a collaborative campaign against on-line forms of violence, about 95% of on-line harassment in the form of text, images and videos are targeted  at women.

The cyber cycle of violence

Intimate partner violence typically occurs in a cycle; how it starts, how it escalates and then starts again follows a circular pattern.

Internet and technology aided violence follows a slightly different pattern. It can start on-line and then escalate to physical assault or the other way around – actual physical violence is aggravated and extended with on-line harassment/blackmail, cyberstalking.

Electronic or cyber violence can be relentlessness and terrifying in its ubiquity and multiplier effect. The anonymity it gives perpetrators leaves victims feeling helpless.

A study on Internet, communications and technology-assisted violence by the Association for Progressive Communications (APC) revealed that current anti-violence laws usually predate the existence of on-line platforms, leaving authorities with questions on how to view violence in this space.

Authorities either underestimate the threat that technology-related violence presents or do not have a full understanding of how the pervasiveness of such violence causes psychological and emotional distress.

Dhyta Caturani, a women’s rights activist in Indonesia, went to authorities when she received threats of rape and intimidation. They told her that since no actual rape had taken place, there was little they could do.

Hess recalls that she was advised by authorities to go off-line – an option that was not realistic for Hess given her occupation. In today’s hyper-connected world, going off-line is more of a luxury than an option.

Anti-violence laws in the Philippines

The Philippine Anti-Violence Against Women and their Children ((RA 9262) defines and includes several forms of abuse. 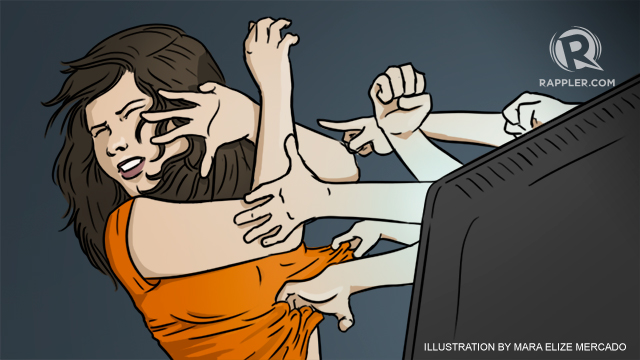 “A liberal interpretation of 9262 can include electronic violence as a form of psychological abuse,” said Claire Padilla, executive director of legal NGO, EngendeRights.

But one limitation of 9262 is that it is predicated on a dating relationship. You must be dating, having sex with or married to the perpetrator.

Gabriela Women’s Party Representative Emmi de Jesus is quoted as saying that existing laws like 9262 are insufficient. Similar laws like the Anti-Photo and Video Voyeurism Act – enacted after the Hayden Kho sex video fiasco – only cover broadcasting images or videos of sexual acts but does not cover other forms of online violence.

Gabriela has filed a bill to amend 9262 to cover all acts of abuse using electronic means.

Other experts are calling for more caution especially given the dual nature of technology. “ICT (internet, communications and technology) can punish women, but it can also empower women,” said Jelen Paclarin, executive director of Women’s Legal Bureau.

“We cannot have the regulation and control of content in the name of protecting women when it will infringe on other rights of expression,” added Paclarin.

Addressing technology-related violence will be a long discussion. It will be a discussion that will need to take place both off-line and on-line and in the spaces between where lines blur.

Protecting women’s rights in an on-line space will be the next civil rights issue. ~ Rappler.com

Segments of this article were taken from the recently concluded Global Voices Summit session entitled, “Sex and Internet: Expression, activism and regulation.”  Ana P. Santos was among one of the panelists.