The lion princes of Divisoria 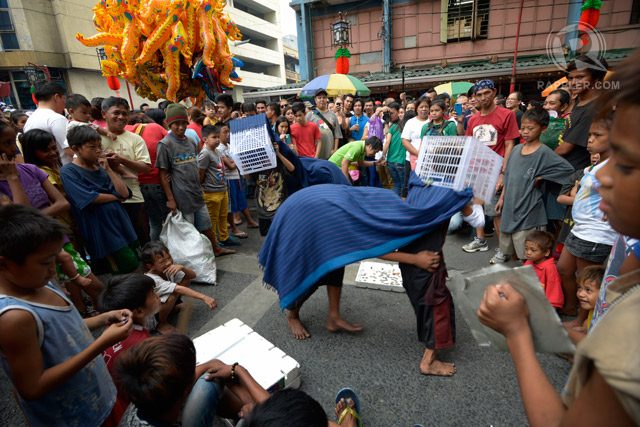 Facebook Twitter Copy URL
Copied
The lion princes aren't after big earnings. For them, it's about a poor teenager's dream

MANILA, Philippines — All they wanted was to beat the drums and perform the lion dance like their peers every Chinese Lunar New Year. And they have the skills for it.

But the boys from Divisoria will not be able to dance with them because they don’t have the requirements – uniforms, IDs, and government clearances.

Angelo Ferreras, Mark Jayson Terbio, Jaycee Ventura, Ian Sese, and Jomar Dizon just entered their teens, and their bodies are more like cubs than lions. They are street children. They have parents but not the kind that have a house or the things normal families have. Angelo, their team leader, only finished first grade.

(All kids can be a lion or dragon, but not all have the money to take pictures or buy unforms, and are able to give the DSWD barangay clearance)

They try to join the dances every year, but always end up watching on the sidelines. In 2014, the group decided they would dance anyway. (We collected styrofoam to turn it into drums; metal lids, fruit trays, to turn these into lion’s heads. Then my grandmother lent us blankets.)

To practice, they used the skills they learned after watching other performers.

(At first the other dragon dancers laughed at us. But when they saw that many were watching us – enjoying, clapping, and giving us money – they would shrug us off.)

(We consider this our work so why would we be ashamed?) Their hard work paid off. Last year, they earned P2,400 from their street performance – matching the earnings of their better-dressed counterparts.

They pointed out, however, that they’re not after the big earnings. For them, it’s about a poor teenager’s dream: fried chicken, computer games, slippers, and money to spare for their families. –Rappler.com