Facebook Twitter Copy URL
Copied
The goal of the group is to bring aquaponics to places that need it most: places where you thought it was impossible to grow anything in

MANILA, Philippines – Imagine a world where your source of fresh fish and vegetables, products of organic farming, is nearer than your neighborhood grocery. What’s even better than that? A world where you can harvest your own produce without even leaving the comfort of your home.

This is what the men of Bahay Kubo Organics have to offer: urban farming for every non-farmer through aquaponics. With aquaponics, you get to grow almost any above-ground plant you want while cultivating freshwater fish at the same time. You also get to do it right under your own roof. It’s an easy, alternative way to start being a responsible eater.

But beyond seeing their work as a way to get city-dwellers in touch with their inner farmers, Bahay Kubo Organics is looking at the bigger picture. To them, aquaponics is a disruptive solution to two things the Philippines faces: food security and lack of livelihoods.

Like many young, idealistic Filipinos living in the US, Bahay Kubo Organics founders Ryan Aguas, Enzo Pinga, and Ilian Pascual found themselves wanting to go home and be of service. Everyday people with everyday observations, the 3 took note of the lack of green spaces in Manila and the abundance of hungry people, and came up with aquaponics.

Inspired by the growing urban farming movement in America, Aguas, Pinga, and Pascual saw the potential for aquaponics to disrupt the usual way Filipinos get food on the table and feed their families. In June of 2012, they set up the social enterprise with the big dream of sustainable communities. 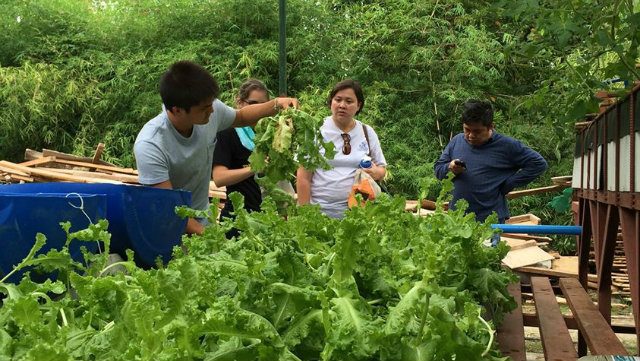 How? The urban farms transform idle space into productive ones where people can grow their own fish and vegetables. Food becomes easier to get, cheaper, healthier, and a possible avenue for business.

In aquaponics, the waste from the fish gives nutrients to the plants, while the plants filter out the waste to get clean water to the growing fish. For the communities, the produce gives them food and livelihood, while their health and income makes for a productive community. Going where no farm has gone before

When asked how they would convince someone to grow their own urban farms, Bahay Kubo Organics said most people have to see it to believe it.

With their own hands Bahay Kubo Organics has built 8 farms, 6 of which are in communities with little arable land to speak of.

Currently, the aquaponics farms in the GK village in Las Piñas, barangay Suay in Negros, barangay Alingarog and Pagnamitan in Guiuan, and in Culion Palawan are all continuing to learn how to grow the food that they can eat.

BKO’s most successful farm to date is its first, the Fairplay For All farm in Payatas.

The little farm in Payatas

In Quezon City, Payatas, a small two-storey house along Bicol road is home to the Fairplay For All charity. Started in 2011 by British natives Roy Moore and Naomi Tomlinson, the center is a place where kids from the community can go to learn, play, and just be children.

For the two, what started out as a free football clinic became a calling that led them to live in the community and open their doors to the children who were out of school, misguided, and neglected.

Running Fairplay For All was a lesson in seeing the problem of poverty through the eyes of people who lived it. Moore says the people didn’t expect much from one-off outreaches or feeding programs with little to no nutritional value. Instead, the parents of the children who frequented the center were hungry for long-term solutions: education and livelihood.

One of the ways they came up to help them is aquaponics. Started in 2013, the urban farm set up by Bahay Kubo Organics and maintained by Fairplay For All grows pechay, cherry tomatoes, arugula, asitava, broccoli, and tilapia. The produce they harvest goes directly to their small carinderia below that feeds the children in the center, teaching them to learn to eat healthier. The people of Fairplay For All are not farmers and they’ve encountered more than a few roadblocks along the way, such as pests, birds coming out of nowhere picking the seeds, and overenthusiastic children. But Moore says the modern agriculture model is self-explanatory and easy enough to maintain. Aside from being a source of food and education for the children, they’re looking at ways to replicate the aquaponics farm in smaller spaces with less materials. With enough experimenting, Fairplay For All hopes to come up with a model they can share with the families in Payatas so they can be urban farmers too. The goal of Bahay Kubo Organics is to bring aquaponics to places that need it most: places where you thought it was impossible to grow anything in, places riddled by overpopulation, places where budgets don’t allow for much nutrition.

It’s a small change for a city that grows bigger by the day. In the little spaces of the city, aquaponics can start making the view ahead of us a little bit greener – with a little help from organic farming. – Rappler.com