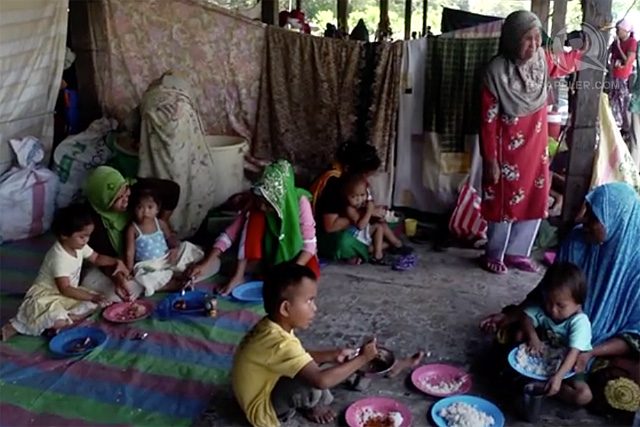 MANILA, Philippines – (UPDATED) Imagine a crowd of 123,537. It would take 7 Araneta Coliseums to house them.

That’s the total number of Filipinos in Muslim Mindanao displaced by military offensives against Moro rebels, according to ARMM Humanitarian Emergency Action and Response Team (HEART).

As of Friday, March 13, the National Disaster Risk Reduction and Management Council said, 11,269 families or 56,345 individuals are in 44 evacuation areas.

More than a month after the fatal Mamasapano operation that resulted in the death of 44 Special Action Force commandos, 18 Moro rebels, and 5 civilians, thousands of civilians continue to live in constant fear and danger.

With no end in sight coupled with the increasing number of IDPs in the region, an aid worker from Oxfam warned in an interview with The New York Times about a “growing humanitarian crisis in Mindanao that is largely being overlooked.”

To date, a total of 48 public schools (elementary and high schools) with 20, 632 students and 301 teachers have also been affected.

How can the rest of the country help?

Responding to the increasing number of internally displaced persons (IDPs) due to conflict, the ARMM launched Tabang Sibilyan on Friday to gather support from people and organizations in providing for the displaced civilians in Maguindanao.

The regional government was spending P12 million per week on food packs as of March 11, when the number of displaced individuals were only at 72,585.

According to Balagot, who is the focal person for Tabang Sibilyan, the project has one drop off point for donations in Cotabato and another in Makati City:

The United Nations High Commissioner for Refugees (UNHFCR) also co-led the Protection Cluster with the Department of Social Welfare and Development (DSWD). The cluster is mandated to safeguard the rights and well being of IDPs whether in situations of armed conflict and/or natural disasters.

UNHCR was among the first responders by providing plastic sheets, solar lamps, and other relief items to the IDPs in Pagalungan.

Interested donors may deposit to the Landbank of the Philippines (Batasan Branch) Peso current no. 3122-10260-28 Under DSWD Donation Account for Armed Conflict in Mamasapano, Maguindanao– Rappler.com

Do you know other humanitarian efforts aimed at providing for the IDPs in Mindanao? Let us know by emailing move.ph@rappler.com.