Mar 29, 2015 1:30 AM PHT
Rappler.com
Facebook Twitter Copy URL
Copied
Sibuyan Island gets its energy from a 900-kilowatt hydro-electric power plant in Cantingas River, proclaimed in 2007 as the cleanest river in the country 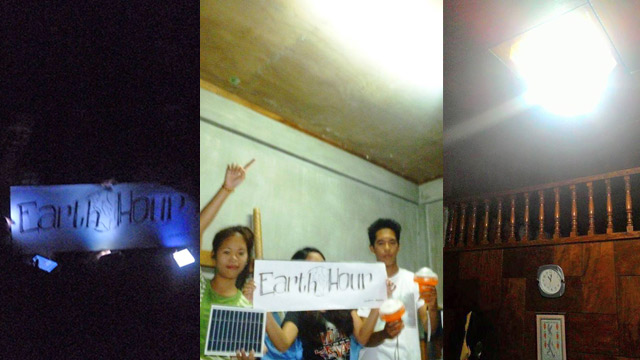 ROMBLON, Philippines – While the rest of the country and the world switched off lights to mark Earth Hour, residents of Sibuyan Island in Romblon province turned on their lights.

The residents heeded the call of environmental volunteer group Bayay Sibuyanon Inc, which made the appeal through its Facebook page.

“Switch on your lights to show the world that in Sibuyan Island, this very hour, our energy is 100% renewable,”  Bayay Sibuyanon said.

The group added, “In Sibuyan Island, we have contributed in reducing carbon emissions significantly in our own little way since 2010 by using renewable source of energy from hydro-power.”

Sibuyan Island is powered by a 900-kilowatt hydro-electric power plant in Cantingas River, proclaimed in 2007 as the country’s cleanest river.

“We have been protecting our forests despite the abuses of some and we are holding our hands together to defend our island from any other possible destruction,” said Bayay Sibuyanon chairperson Rodne Galicha.

Galicha is also the Philippine manager of The Climate Reality Project, a global movement founded by former US Vice President Al Gore.

The power plant operated by Cantingas Mini-Hydro Power Corporation provides 90% to 95% electricity while a diesel powered generator serves as back-up. There are certain hours of the day when it reaches 100% renewable energy.

“Right here in the middle of the Philippines, in Sibuyan Island, we can. Right at this very hour from 11pm to 12am, our source of energy is 100% clean,” said Elizabeth Ibanez, the organization’s climate change and disaster risk reduction and management officer.

“If a small island can do it, why not the world? We are joining the Earth Hour by switching on our lights in Sibuyan Island, The Philippines. Be a light!” said Ibanez.

Commenting on a Facebook thread regarding Sibuyan Island’s switching on of lights, WWF Earth Hour Philippines Director Angelo Consuelo Ibay said the initiative is a “fantastic example and excellent work.”

“Our global vision is to go 100% renewable by 2050. Examples like yours show that it can be attainable,” said Ibay.

Launched by WWF in Australia in 2007, Earth Hour takes place beginning 8:30 pm local time, and encourages citizens, communities, businesses, and organizations to switch the lights off for an hour to highlight the plight of the planet.

Over the past 8 years, the movement has grown from a symbolic switch off event to a fun, modern, and open-sourced environmental campaign mobilizing hundreds of millions of people in over 7,000 cities and 162 countries.

The Philippines has been one of the movement’s staunchest supporters and has been hailed as a “Hero Country” for topping participation levels from 2009 to 2013. (READ: Philippines is Earth Hour ‘Hero Country’ for 4th Year)

This year, Earth Hour comes ahead of a crucial UN meeting in Paris in December which is bringing together the global community in an effort to limit global warming. – Rappler.com