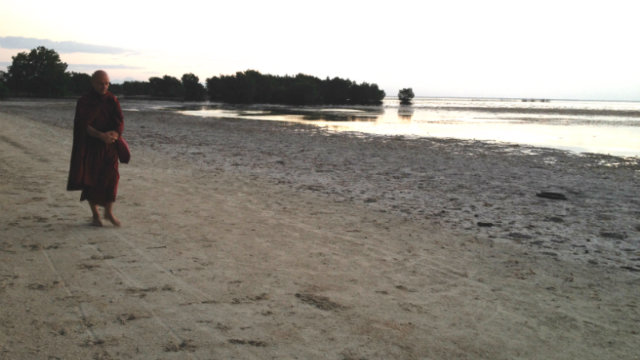 PALAWAN, Philippines – Every morning, just as the sun is rising along Clarkville beach in Puerto Princesa in Palawan, a monk walks down the shore in deep maroon robes with a small black bowl in hand.

He’s on his way to a small village in Barangay San Pedro where he’s to make his rounds among the houses, receiving food and giving blessings.

His name is Bhante Rakkhita. To the Filipinos, he’s Brother Ben.

Finding spirituality in the barangay

When Bhante started on his morning walks in February of 2014, people had no idea what to make of him. Here was a bald, older Caucasian man with a British accent who walked around the whole place with only his robes on and without any shoes.

To bridge the communication gap, the owner of a wellness and detox retreat center near the village called Bahay Kalipay helped explain Bhante’s presence and the age-old Buddhist tradition he was trying to live out – you offer any available food you have in the bowl for the monk, and then you share in a blessing with him.

What started out as a conversation of 3 sentences – “Tao po?” “Let us pray” and “Salamat po,” grew into a relationship where people shared their stories with him, and more and more of them invited him into their homes.

Bhante seeks to offer a daily spiritual exercise where people come together to be quiet and pray while the rest of the world waits. When he speaks his mantra, the people go quiet and, though they may not have understood it before, the silence puts people’s minds and hearts together in unity.

These days when Bhante invites the Filipinos to pray, he plays a translation from a tiny speaker he places in his bowl and as they comprehend the words, people close their eyes. “Para sa isang kagalang-galang na tao na pinaparangalan ang kanyang kalikasan, ang apat na ito ay tataas:  mahabang buhay, kagandahan, kaligayahan at lakas.“ (For one worthy of respect who constantly honors his nature, four qualities increase: long life, beauty, happiness, and strength.” 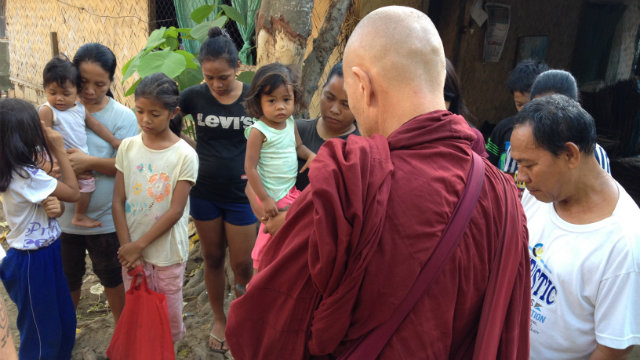 The more homes he shared himself with, the more Bhante grew to love the Filipino people even more. Their warmth and their co-dependency was everywhere and you could see it went beyond just giving what you already had.

During one of his morning rounds Bhante met a woman who adopted a baby after finding out the mother attempted to drown her newborn in desperation. This story of desperation and despair brought Bhante to investigate the incomes of the families he visited. In the process of investigating, Bhante heard the call for help.

People in the area call Bhante “the Facebook monk.” In the age when having an online connection eliminates barriers, Bhante uses social media to share the people’s stories and seek for help.

One of the people he’s helped is Nora. The fourth child of the Montemor couple, Nora was born with cerebral palsy.

Dealing with it was a challenge for Berting, with his chronic mouth ulcers, and Nancy, who had to close her sari-sari store to take care of her. Seizures were a part of their normal life and after trying different medicines, it seemed like it would be something that wouldn’t go away.

In one of his many rounds, Bhante saw 7-year-old Nora sitting in a wheelchair and as he usually does, he asked about their lives. Later on, he found funding for them to look for a new doctor who recommended a stabilizing medicine that has changed their lives.

Rhodora Valencia is an 18-year-old Bhante helped to get school supplies and a school uniform to continue with her tourism course. What she received in the end was much more than clothes and papers.

After seeing Bhante’s work she realized that instead of studying so that she could end up as an overseas Filipino worker, she wanted to stay home and help. When she talks about her interest is in welfare work, it sounds like nothing else seems desirable for her. She sees kids her age getting into drugs, sex, getting married early, not taking care of their children.

She’s started her welfare work by translating Bhante’s books on spirituality and meditation so that people from the community can read them as well. When people listen to the Filipino version of Bhante’s mantra, it’s Rhodora’s voice they hear. 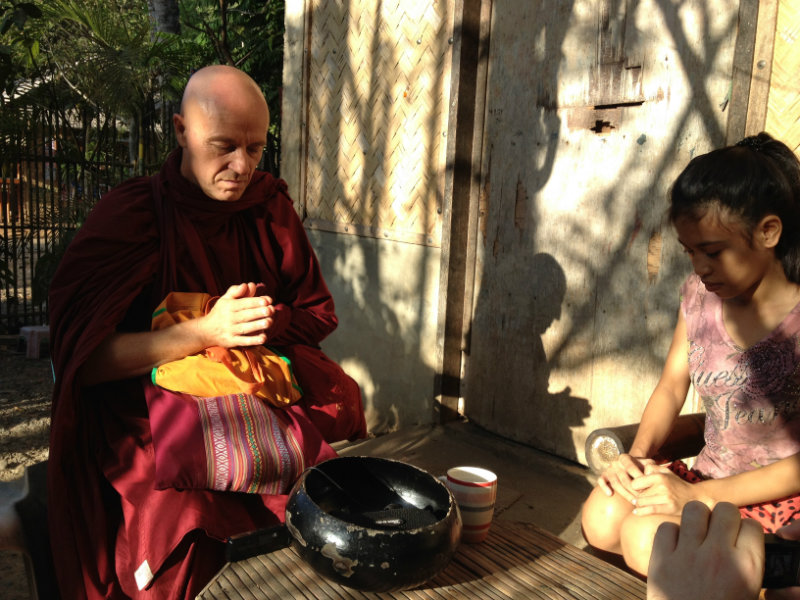 Another man Bhante has connected with is Arsenio Sanio. Arsenio is a quiet man who always has a smile on his face. At first he seems like any other Filipino grandfather, silently going about his way, but with more observation, you’ll see the limp and drag of his left leg. Arsenio had a stroke in 2008 and his control of the left side of his body hasn’t been the same since. For 7 years now he hasn’t been able to do his life’s work as an electrician. After meeting him, Bhante connected him with a local healer, Fern Yanson, a hidden gem in Barangay San Pedro.

She’s an expert in figuring out how to heal people with different recipes and combinations of things you’ll find in nature. An accident gave her son paralyzed legs and she healed him with fruits, vegetables, and neuro-lymphatic massage. Bhante sends sick people her way for healing that won’t break their bank accounts. A guest of Bahay Kalipay Bhante brought over has even given her a blender so she could make green smoothies for the families whose daily diet only consists of noodles and rice.

Fern is a healer but she’s also in need. Her grandson has colon cancer and has to live with a colostomy bag.  Without thinking twice, Bhante called out for help online and found two Filipinos who conduct a medical mission for diseases just like his, the World Surgical Foundation mission. Fern’s grandchild will be getting his surgery next year. This year, it was baby Renche’s turn. 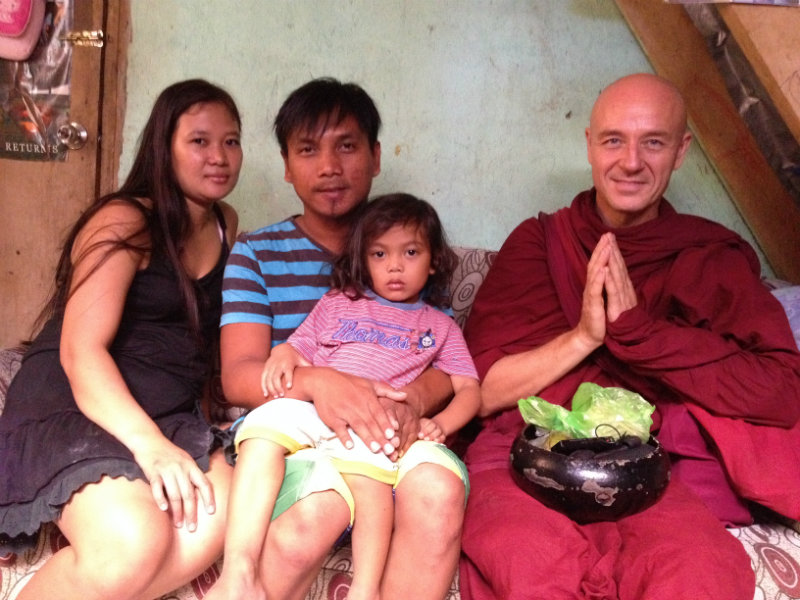 3-year-old Renche Kuddana Jr was born with Hirschsprung disease. He was born without an anus. Earlier this year, his parents Renche and Rachel were about to fly to Manila with only good intentions and hope, believing that somehow they’d be able to pay for the surgery, for a place to stay, food, and anything else they may need.

Right before they were about to leave, they met Bhante. Overnight, the monk came back to them with news that a woman from the United Kingdom was willing to fund the operation, to be done by a medical mission in Bacolod.

Just this April of 2015, right before baby Renche was to get another procedure done, another donation came in for him through Bhante’s network – a Christian woman wanting to help a Muslim family, through a Buddhist monk.

Filling in the gap through crowdfunding

Bhante isn’t on Facebook just because. He’s on the social network because he believes that there’s a gap in resources and assistance that humans from all over the world can fill in. The qualities that have endeared Bhante to Filipinos are alive online too. The warmth and co-dependency he found in the village was the same warmth and co-dependency people on Facebook showed him every time he would call out for assistance.

Search Bhante Ven Rakkhita Samanera and you’ll see that his Facebook feed is a diary of all the tears, fears, and hopes of Barangay San Pedro. It is an experience in sharing plights and being open to receiving solutions. The continuous help Bhante has received from people from all over the world has driven him to see crowdfunding as a tool that people in the village can use for themselves.

A small group of interested young people have come under Bhante’s wing to learn how to harness the Internet to connect with good souls all over the world. They’re slowly learning to use sites they had never heard of before because they want to break the cycle that poverty has introduced in all of their lives in one way or another.

It’s not just about filling in for the short-term needs.

The lives of the people in Barangay San Pedro have been recurring episodes of struggle. Having a hand to help them get back on their feet gives people new hope. Knowing there are people who support them gives them a new drive to strive for things better than what they already have. It’s a fresh infusion of goodness in their daily lives consumed by poverty. It’s a sign that it’s time for them to move forward. – Rappler.com

Dindin Reyes is a yoga instructor, teaching Vinyasa and Hatha classes. She graduated from a 200-hour RYT Vinyasa teacher training at White Space Mind and Body Wellness. As an instructor, she is passionate about teaching beginners and helping them find what yoga is for them. Dindin also writes about yoga, social enterprises and volunteering in the Philippines on thelargeworld.wordpress.com.