Apr 20, 2015 2:48 PM PHT
Facebook Twitter Copy URL
Copied
'Farmers are not having a field day. Due to the dry spell, they can’t grow any crop. They can only pray and wait.' Working on food and agriculture issues, my job takes me to different parts of the country where I meet local farmers, and occasionally visit farms.

Recently, I was in North Cotabato where the local agriculture has been hit by a dry spell, coinciding with a weak El Niño. In the town of M’lang, I found myself walking on what appeared to be abandoned rice fields, with dying rice plants and unfilled grains left standing.

Scanning the horizon, all I could see were rice fields that have turned brown, interspersed with occasional grasses. Some plots had rice stubbles after farmers hastily harvested the top grain portion of the plants in an effort to salvage as much as they could. When I parted the parched rice plants, all I saw was cracked dry soil. I thought of gaping mouths waiting for the rain. El Niño sets in; PAGASA warns of ‘erratic’ typhoon season

All was still and quiet, save for some ducks scavenging for rice grains left in the vast fields. Rather unusual as early mornings in rice farms are usually full of vibrancy and life with farmers going about their daily chores in the field.

A couple of cows roamed freely, left alone by their owners so they could forage for some of the last green grass. Carabaos were also left loose so they could roam the fields and wallow in small ponds where pockets of water still stood. Farmers, who refuse to be idle, scattered mungbeans on the parched soil, hoping to get lucky. They use the rice straw as mulch or cover to conserve whatever moisture left in the land.

Right now, farmers are not having a ‘field day’. Due to the dry spell, they can’t grow any crop. They can only pray and wait.

Even large corporate farms have not been spared from the impacts of this dry spell. There was simply not enough water to make banana trunks sturdy and stand tall. Barangay captain Joelito Tayco sadly told me around 60 workers had been laid off that week. (READ: How El Niño could affect the Philippines in 2015) 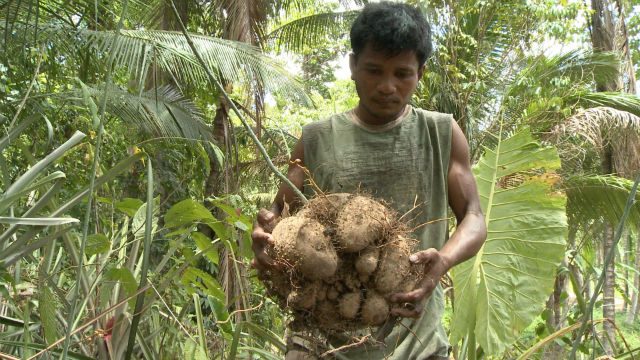 Aside from farms, families are suffering from the setbacks. There were reports that in another town, 4 people were admitted to the local hospital due to food poisoning.  Because there are no other edible crops being grown. They were forced to eat wild yam (Dioscorea hispida) – a poisonous root crop that needs to be processed well to remove its toxic content.

That they had nothing to eat, except for this poisonous wild yam, is an indication of the desperation and the degree of hunger being felt by some families. This sets the alarm for an immediate action and response.

As of April 13, North Cotabato province reported P230 million ($5,199,504)* damage to agriculture due to dry spell. Two towns, including M’lang, have declared a state of calamity to trigger the release of 70% of their calamity funds. This fund will be used for food aid and for seeds and fertilizer support to farmers.

This is now becoming the new normal.

Despite this, and as I have personally witnessed, the people here don’t easily give up and have learned to cope. Farmers in M’lang are adapting to the changes and have different resilience strategies: planting mungbean, mulching/covering the soil to conserve moisture, amending their food with fish, and wild crops from the forest. Having diversity at the level of farms and communities seems to provide farming families with some ‘insurance policy’ in times of crisis.

Working with diversity is a cornerstone of ecological agriculture, a farming technology that enables farmers to be able to plant more varieties of seeds, growing more crops that are able to withstand different stresses, including climate shocks. Nevertheless, we cannot just let our farmers take the brunt and solve the problem themselves. There has to be a more concerted effort at the local and national levels to move towards a more climate-resilient model of food and agriculture using ecological farming technologies.

This is especially urgent as we are faced with frequent and intense extreme weather events like drought and super typhoons.

Building resilience includes equipping farmers with the latest weather information so that they can plan and prepare well. (READ: El Niño 2015: How can Filipinos better understand it?)

Governments and other agencies should work together to set up localized early warning systems to be at the hands of farmers.  Farmers, after all, are at the forefront of addressing the impacts of a dry spell and extreme weather events such as droughts and super typhoons.

Our food and agriculture is not a ‘still life’. We need to cope with the fast-changing times and unpredictable seasons in order to advance food and nutrition security for all. – Rappler.com