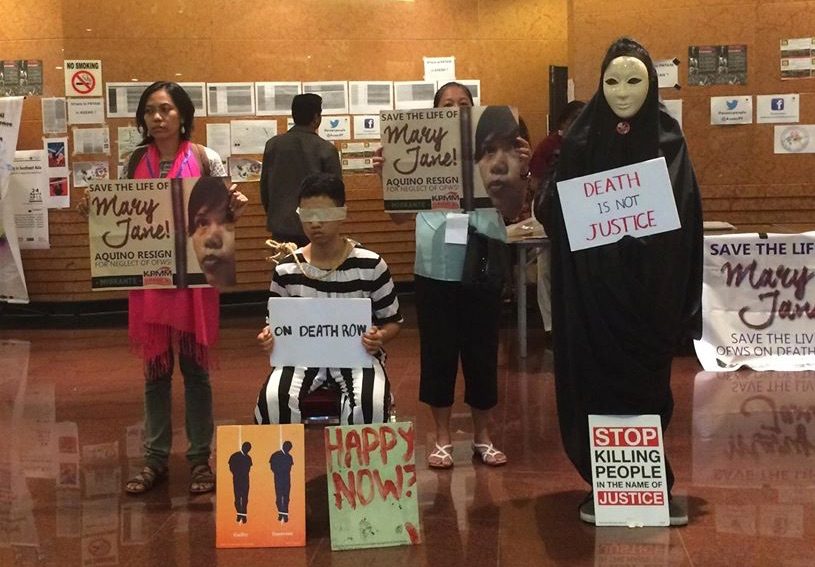 Anggun, an Indonesian-born French citizen, also tweeted #MaryJane after posting on her official Facebook page an open letter to Jokowi stating her opposition to the death penalty, especially for French citizen Serge Atlaoui.

The hashtag #MaryJane earlier trended in Indonesia, started by Twitter celebrity Rahung Nasution, as Indonesian rights groups appeal for the Filipina on death row. (READ: Indonesians, too, appeal for #MaryJane)

Nicolas Saputra, one of the biggest celebrities in Indonesia, sent out two tweets in support of Mary Jane earlier on Saturday, April 25.

(Will God forgive us if we punish people who turn out to be innocent?)

Jose Ramos-Horta, former President of Timore Leste, which gained independence from Indonesia in 1999, also urged President Widodo to show compassion to the Filipina on death row.

Posted by Save the Life of Mary Jane Veloso on Saturday, 25 April 2015

Meanwhile, church groups in the Philippines kicked off a global appeal for clemency and pardon for Mary Jane on Sunday, April 26.

“We appeal to President Joko Widodo to send a different message of his tough stance on drugs. Now that Mary Jane’s family has come forward with remarkable courage, there is an opportunity to educate many on the reality of drug trafficking and human trafficking,” said the Promotion of Church People’s Response (PCPR), the group that initiated the online appeal on the global petition platform Change.org. (READ: SIGN THE PETITION: Join global action to #SaveMaryJane)

The petition went viral on Sunday, having gathered over 13,000 signatures after the Church Task Force to Save the Life of Mary Jane Veloso launched the global action to support the appeal via MovePH, Rappler’s civic engagement arm. 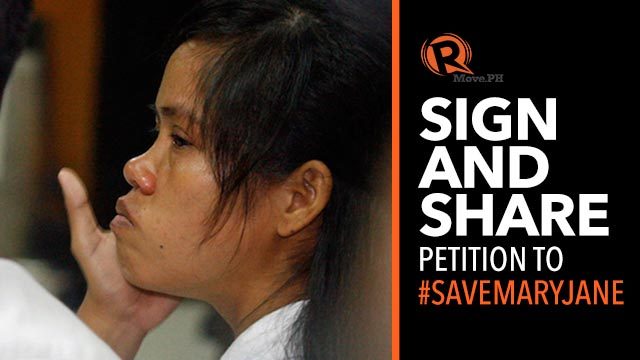 A similar appeal translated into Bahasa Indonesia was also introduced in Indonesia on Sunday.

The hashtag #MaryJane earlier trended in Indonesia, started by Twitter celebrity Rahung Nasution, as Indonesian rights groups appeal for the Filipina on death row. (READ: Indonesians, too, appeal for #MaryJane)

Indonesian migrant workers planned to hold a solidarity action on Sunday in Hong Kong in front of the Indonesian consulate.

“We will hold a solidarity action because Mary Jane Veloso is a victim of poverty and of human trafficking,” activist Muthi Hidayati was quoted by Tribunnews.com

Civil society organizations and migrants’ rights groups that recently gathered in Malaysia for the Association of Southeast Asian Nations (ASEAN) People’s Forum from April 22 to 24 threw their support behind Mary Jane.

Migrant workers and supporters today held an action to call for support to save #MaryJaneVeloso, a Filipino victim of…

“We appeal to our respective Heads of States and peoples to join the international clamor to Save the Life of Filipina Mary Jane Veloso,” the statement that circulated during the forum said.

– With reports from Jet Damazo-Santos in Indonesia / Rappler.com